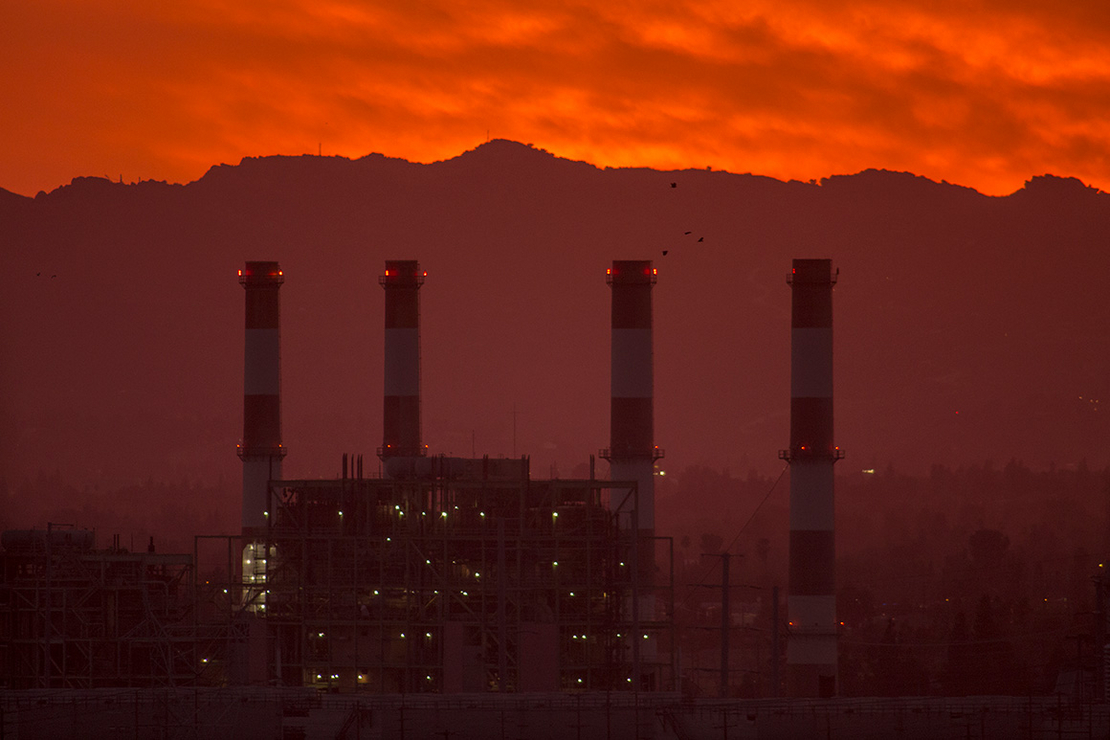 A public policy firm that represents electric utilities and oil companies recently launched a new group to tout technologies that capture carbon from smokestacks as a climate solution.

Bracewell LLP created the Capture Action Project in April as federal officials prepare to spend $8.2 billion on efforts to catch, transport and store carbon dioxide from industrial facilities. It joined a crowded field of groups that are advocating for expanded research, development and deployment of expensive technologies that can filter CO2 from smokestack emissions or suck CO2 from the air.

The unprecedented influx of government support for carbon capture and storage was provided by the bipartisan infrastructure bill President Joe Biden signed into law last year.

The law and lobby firm acknowledged its central role in the Capture Action Project after being contacted by a reporter, but the group’s website names no backers and attributes all of its posts to “CAP Staff.” The group added a media contact to its website after E&E News asked Bracewell about the group’s secrecy.

The Capture Action Project also stands out for the way it targets critics of CCS, according to experts.

“This looks like a glossy effort to showcase the benefits and also try to take out the legs of the opposition” to carbon capture, said Wil Burns, a professor at Northwestern University and a senior fellow at the Institute for Carbon Removal Law and Policy.

Bracewell’s advocacy for carbon capture and storage is a reversal of the firm’s previous positions on CCS, which it opposed on behalf of its electric utility clients.

“CCS is neither economically viable nor commercially available,” Scott Segal, a Bracewell partner, said in 2012. He was commenting on an EPA proposal that would have required the technology to be used on new fossil-fuel-fired power plants.

At the time, Segal was the director of the Electric Reliability Coordinating Council, which described itself as a group of major utilities with the “shared belief that coal-based energy should play an important role as our nation moves toward a clean energy future.” He stayed in that role until a few years ago.

Segal said in an interview last week that his position on CCS has changed as the technology matured.

“The technology’s gotten more robust. We’ve been developing it. There’s more interest in financial markets about it. I mean, things are changing,” he told E&E News on the sidelines of the Climate Leadership Conference in Virginia.

Segal was at the conference to speak on a panel about Navigator CO2 Ventures LLC, a private carbon capture company that’s now one of Bracewell’s largest lobbying clients.

Navigator is attempting to build a 1,300-mile pipeline network called the Heartland Greenway. The project aims to take CO2 captured from biofuel-makers and other industrial customers in Illinois, Iowa, Minnesota, Nebraska and South Dakota to a sequestration site in central Illinois.

Navigator paid Bracewell $150,000 in the first three months of 2022 to contact federal lawmakers about “policy issues related to infrastructure for carbon capture and sequestration for biofuels,” according to a congressional filing. Only the consulting firm McKinsey & Co. Inc. has disclosed spending as much this year for Bracewell’s lobbying services.

During his conference presentation last week, Segal acknowledged that local pipeline opposition could pose a threat to the plans of Navigator and other companies (Greenwire, May 27).

“You may have heard that there were some pipelines over the last several years to try to build through the Midwest that encountered some tough sledding,” he said, referring to community protests against the Keystone XL and Dakota Access projects. Developer TC Energy Corp. last year abandoned its Keystone plan (Energywire, June 10, 2021).

The opposition, Segal noted, was driven in part by a feeling that the benefits would accrue mainly at the beginning and end of those oil pipelines.

“Communities that have the pipelines as a fact of life here, with respect to Heartland Greenway, also are the communities that benefit from the enhanced value proposition for commodity agriculture and for biofuel production,” Segal said. “That is a very different corporate citizen.”

Bracewell’s Capture Action Project has sought to undermine some groups that have raised concerns about carbon capture pipelines.

“Recently, a group called Food & Water Watch has been treating those living near potential carbon capture projects to a barrage of adverse arguments, including the unsurprising conclusion that folks would rather not see eminent domain authority used solely for private gain,” CAP staff wrote on the website. The post went on to highlight a February tweet from the environmental organization that said “all pipelines” are disastrous.

“These hardly seem like objective views that people can use to call balls and strikes on projects so important to maintaining energy security and addressing greenhouse gas emissions,” the CAP post said.

A Food & Water Watch representative said Bracewell’s criticism demonstrated that the environmental group’s campaign to “protect Iowa and other states from these dangerous, unneeded carbon capture pipelines is gaining steam.”

“The Capture Action Project expresses an apparent concern for our climate future, but nowhere does it even mention the aggressive shift to clean, renewable energy that will be required to save this planet from deepening climate chaos moving forward,” Emily Wurth, managing director of organizing for Food & Water Watch, said in an email. “We have the solutions to fight climate change — and it doesn’t involve corporate-backed boondoggles like CCS.”

Bracewell’s CCS advocacy group has also targeted the Pipeline Safety Trust. Earlier this year, the safety advocacy group warned that the U.S. is “ill prepared for the increase of CO2 pipeline mileage being driven by federal CCS policy” (Energywire, March 31).

Bracewell dismissed the Pipeline Safety Trust by highlighting its links to the Democratic megadonor George Soros and calling its proposal for increased federal oversight “unnecessary hyperbole and scare tactics that aren’t reflective of reality.”

“We have had very productive conversations with regulators and even industry groups who have agreed with the regulatory shortfalls our report identified and I look forward to working with them to help make safer the potential buildout of new CO2 pipelines,” he said in an email.

“I’ve studied corporate PR and green washing initiatives in different ways and different industrial sectors,” said Daniel Renfrew, an anthropology professor at West Virginia University. “What I see by looking through the website, it definitely follows a familiar playbook of corporate PR.”

“It must be effective if they’re still using it,” added Melissa Aronczyk, a Rutgers University media studies professor and the author of a history of environmental PR campaigns.

Rebecca Brown, a principal at Bracewell, called that likeness “absurd on its face,” pointing out that CCS projects aim to capture emissions and address rising temperatures. “CAP’s goal is to help make sure that readers have access to information so that they can evaluate the facts for themselves,” she said in an email.

A Government Accountability Office audit last year found three of the 11 carbon capture projects the Department of Energy had funded since 2009 were completed, and one — the only commercial coal plant in the United States operating with a carbon capture system — went offline in 2020 (Energywire, Dec. 21, 2021).

Around the world, there are 27 commercial facilities capturing CO2 and injecting it underground, according to the Global CCS Institute, a think tank.

“It is injudicious to be advancing the message that we can remain wedded to fossil fuels because there is a fix,” said Burns, the Northwestern professor. Carbon capture, he noted, doesn’t eliminate the other air and water pollution associated with drilling, processing and shipping fossil fuels.

“It’s dangerous to communicate to people that we have to continue to utilize fossil fuels for the next four decades, in very large quantities, because we can’t electrify all these industries quickly enough and we can’t put in the infrastructure to facilitate that,” Burns added. “There’s a lot of research that indicates that that’s not true, and I don’t want that to become a self-fulfilling prophecy.”

What’s next for CAP?

But Aronczyk of Rutgers expects Bracewell to eventually ramp up the group’s outreach efforts.

“It’s really just a matter of time,” she said. “I just think the only reason you haven’t seen it yet is, they just formed.”

Brown, who joined Bracewell after serving as a top Energy Department spokesperson in the Trump administration, said the group’s focus right now is on building up its library of content. But she didn’t rule out future ad campaigns.

She also suggested the site could someday become more transparent.

“When we write specific blog posts, there will probably be a time where it’s my byline or another member of our team who is writing in their own voice with their name,” Brown said in an interview. “It’s certainly not something that we’re trying to hide.”

Brown declined to share how much money Bracewell planned to spend on the project, but said “there are several dozen individuals and entities that have contributed to CAP. “

More than a dozen organizations contacted by E&E News said they were unaware of CAP and denied being involved with it. They included CO2 pipeline project developers and think tanks, trade associations, and environmental groups interested in carbon capture.

Navigator was the exception.

“We are familiar and support its mission,” Andy Bates, a spokesperson for the carbon capture company, said of CAP.

Aroncyzk, of Rutgers, predicted that many of the corporations and industry groups that Bracewell suggests are funding CAP will begin amplifying the group’s messaging on carbon capture.

“In order for regulation and legislation to move forward through the various political machines, you need to be able to convey the sense that there’s a lot of public support for those initiatives,” she said. “So really what they’re doing is stacking the deck when it comes to having all these different voices.”