‘Brett Kavanaugh is the next Scott Pruitt’ — Carper 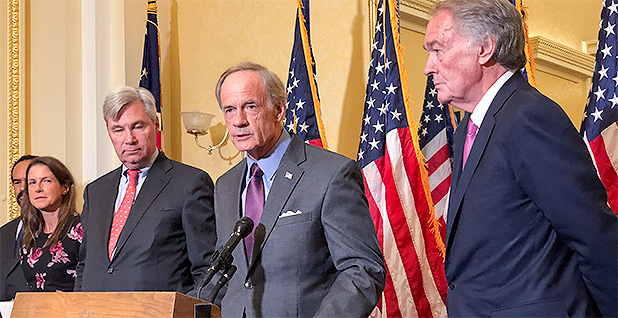 Environmentalists and their allies in the Senate have launched a full-court press in an effort to defeat the nomination of Brett Kavanaugh to fill the seat of retiring Supreme Court Justice Anthony Kennedy.

Several members of the nation’s largest environmental groups yesterday spoke at a Capitol Hill press conference in opposition to Kavanaugh, a prominent conservative judge on the influential U.S. Court of Appeals for the District of Columbia Circuit.

By their side, a trio of Senate Democrats aimed to tie Kavanaugh to the scandal-plagued former EPA Administrator Scott Pruitt and make the environment a part of a broader debate over the Supreme Court nomination that so far has been dominated by social issues such as abortion.

"There’s some people who think this is an uphill battle, but we’re going to take this shot," Sen. Tom Carper (D-Del.) said at the event before leading a broader group of Democrats speaking out against Kavanaugh and his past environmental rulings on the Senate floor.

At the same time, Republicans and conservative groups continue to push for swift confirmation. The Judicial Crisis Network, which spent millions of dollars blocking President Obama’s Supreme Court nominee Merrick Garland and confirming Justice Neil Gorsuch, on Monday announced a $1.4 million ad campaign in support of Kavanaugh, bringing its total spending on the nominee up to $3.8 million.

Sen. John Cornyn (R-Texas) yesterday told reporters that the goal is for Kavanaugh to be confirmed in time to assume the bench for the Supreme Court’s fall term beginning Oct. 1.

"We’ve already begun to hear rumblings from our Democratic colleagues that they’re going to want to see every scrap of paper that ever — that ever came across Brett Kavanaugh’s desk," Cornyn said.

He added: "But we’re not going to sit idly by and allow our Democratic colleagues to draw this out by making unreasonable document demands, which would delay this hearing until well past the election."

Kavanaugh was scheduled to meet with several Republican senators yesterday, including Sens. Thom Tillis of North Carolina, Ted Cruz of Texas and Steve Daines of Montana.

On the Democratic side, eyes have been on moderates from red states and on Carper, who was among one of only a few Democrats — and the only one still left in the Senate — who voted in favor of Kavanaugh’s nomination to the D.C. Circuit in 2006.

Carper, who serves as the top Democrat on the Senate Environment and Public Works Committee, yesterday reiterated what he told reporters last week: that he is unlikely to support Kavanaugh in his Supreme Court bid.

"Brett Kavanaugh is the next Scott Pruitt," Carper said, referring to the former EPA administrator who resigned earlier this month after being plagued with ethics scandals. "Brett Kavanaugh’s job will be to make sure that the legacy of Scott Pruitt, rather than fading away from us, is preserved."

Carper, who yesterday received an endorsement in his re-election campaign from the League of Conservation Voters, pointed to deregulatory moves of Pruitt’s that gelled with Kavanaugh’s D.C. Circuit rulings.

Carper said he was particularly concerned about Kavanaugh’s views on the Clean Air Act’s "good neighbor" provision. On the D.C. Circuit, Kavanaugh penned a majority opinion — later overturned by the Supreme Court — throwing out the Obama administration’s rule for regulating air pollution emissions that cross state lines in the Northeast.

Under Pruitt’s tenure, EPA proposed to reject petitions by Maryland and Delaware to limit smog-forming emissions from out-of-state power plants.

"We’ve had an opportunity to see what Judge Kavanaugh would do in part of the D.C. Circuit Court of Appeals on this issue," Carper said, "and I don’t want to sit around and just wait around to see what he would do nationally if he were a member of the Supreme Court."

He called the Supreme Court nominee "Scott Pruitt in robes."

"Extract Justice Kennedy with his retirement, put in Kavanaugh. … I suspect what they’re going to want is a reversal of Justice Kennedy’s position in favor of the environment in all the issues in which he was the 5-4 tiebreaker," Whitehouse said. "Now all those cases will go back the other way."

Senate Democrats and environmentalists are particularly rallying around the issue of climate change, highlighting a 2012 dissent in the D.C. Circuit in which Kavanaugh questioned EPA’s authority to regulate greenhouse gas emissions.

"He argued for a very limited interpretation of EPA’s argument to regulate," said Sen. Mazie Hirono (D-Hawaii), a member of the Senate Judiciary Committee who will get a chance to grill Kavanaugh at his upcoming confirmation hearings.

Sen. Ed Markey (D-Mass.) said he fears that the addition of Kavanaugh would enable the Supreme Court to limit its landmark climate change ruling for Massachusetts v. EPA, in which Kennedy cast the deciding vote giving EPA the authority to regulate greenhouse gases.

"The fear, obviously, is that they will find a narrowing case to limit the ability of a state or citizens to bring a case, in the same way that we’re concerned with the Texas case that is percolating up on a woman’s right to choose," Markey said.

He acknowledged that it can be difficult to make complex and obscure legal concepts that appear in environmental and administrative law cases accessible to suburban swing voters who supported President Trump or decided to sit out the 2016 presidential election.

"There were many swing voters across the county who cast a vote for him clearly thinking a woman’s right to choose, environmental laws, consumer protection laws were settled law," Markey said.

Kavanaugh’s nomination "sets up challenges to existing interpretations of law that could have devastating long-term consequences for that suburban swing voter who decided to give Donald Trump a chance," Markey said. "They thought everything was protected, maybe they would get a tax cut. That’s not the case."