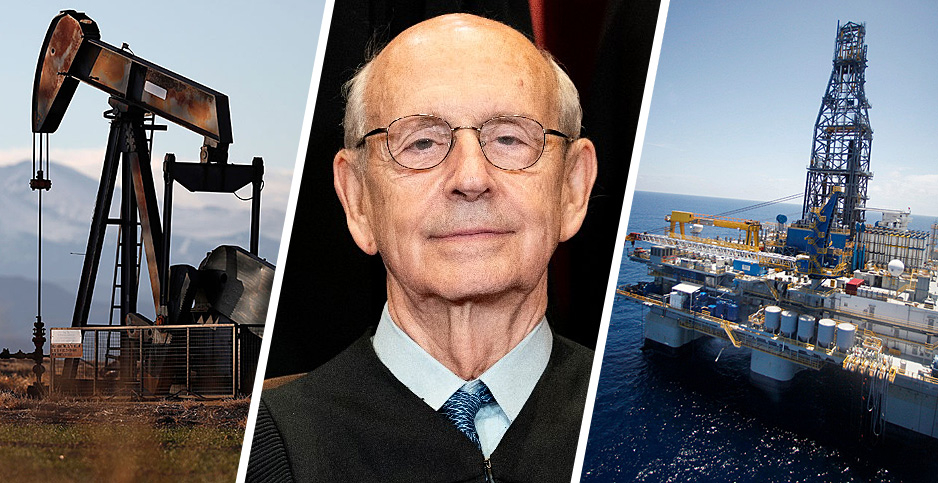 A 40-year-old ruling penned by Stephen Breyer on the timing of environmental reviews has laid the groundwork for a new wave of litigation over the quality of climate analyses for energy projects and oil and gas development.

The decision, which Breyer wrote while he was a judge of the 1st U.S. Circuit Court of Appeals, is among the Supreme Court justice’s lasting contributions to environmental law. Breyer, 83, announced last week that he plans to retire this summer (Energywire, Jan. 28).

In his 1983 opinion in Commonwealth of Massachusetts v. Watt, Breyer emphasized the importance of fully analyzing the potential risks of projects before “bureaucratic commitment” prevents federal agencies from pumping the brakes on development.

Watt is widely cited by organizations pushing for more thorough National Environmental Policy Act analyses in cases related to coal mining and oil and gas drilling on public lands and waters. The bedrock environmental statute requires federal agencies to take a hard look at the impacts of major actions, such as pipeline permitting and fossil fuel leasing.

“The concept [of bureaucratic commitment] is widely known and widely cited as a reason why comprehensive NEPA evaluation at the earliest stage possible is important,” said Kristen Monsell, oceans programs litigation director at the Center for Biological Diversity.

She noted that when attorneys for her organization cite Watt, they add a parenthetical saying Breyer wrote the opinion.

In Watt, then-1st Circuit Judge Breyer found that the federal government should have prepared a supplemental analysis for offshore leasing after it reduced its estimate of the benefits of drilling for oil in the outer continental shelf of the North Atlantic Ocean.

Breyer emphasized the importance of halting development while the government prepared an environmental impact statement. Stopping work, he said, would prevent oil companies and the government from proceeding with planning based on the leases.

“Each of these events represents a link in a chain of bureaucratic commitment that will become progressively harder to undo the longer it continues,” Breyer wrote.

“Once large bureaucracies are committed to a course of action, it is difficult to change that course — even if new, or more thorough, NEPA statements are prepared and the agency is told to ‘redecide.'”

The takeaway from Breyer’s opinion is that unless comprehensive analysis occurs at the start of a project, the government tends to favor allowing development to continue, Monsell said.

“While a new [environmental impact statement] might bring about a new decision, it’s much less likely,” Monsell said of Breyer’s reasoning.

She added: “It’s far easier to influence an initial choice than to change a mind that is already made up.”

That concept has been important in recent offshore leasing disputes, in which the Bureau of Ocean Energy Management has not conducted additional NEPA reviews for subsequent development, production and exploration stages, said Monsell.

Instead, she said, BOEM has issued categorical exclusions that allow development to move forward based on broader programmatic analyses of environmental impacts.

That approach was rejected last week by Judge Rudolph Contreras of the U.S. District Court for the District of Columbia, who struck down BOEM’s climate analysis for a Biden-era lease sale covering more than 80 million acres in the Gulf (Energywire, Jan. 28).

Court decisions on the timing of NEPA review have made the statute a strong tool for preventing energy projects from moving forward, said James Coleman, a law professor at Southern Methodist University.

“The idea that if you don’t stop things before they get started, that you won’t be able to stop them afterwards, has, if anything, grown stronger,” he said.

Coleman noted that the ability to block new infrastructure under NEPA doesn’t address the more pressing problem of phasing out fossil fuel-based infrastructure that lacks the latest pollution control measures.

“It’s very hard to phase out existing projects but quite easy to prevent new ones,” Coleman said.

Breyer and other judges have established that the leasing stage is the point of “irretrievable commitment” in NEPA cases related to federal oil and gas development.

At that point, said Kyle Tisdel, director of climate and energy at the Western Environmental Law Center, federal regulators still have the opportunity to walk back development if needed.

“Judge Breyer’s decision is about when does that type of robust analysis need to occur,” said Tisdel.

Contreras, the same judge who last week tossed out Biden’s offshore lease sale, issued another ruling in 2019 that rejected 300,000 acres of leases in Wyoming for inadequate climate review. Other federal judges in New Mexico and Montana have reached similar conclusions in recent leasing disputes.

The Biden administration has already recognized through a review of its leasing programs that about a quarter of U.S. emissions come from the development of coal, oil and gas on public lands, said Tisdel.

“The next iteration of climate litigation … is moving beyond the need to take a hard look at this stuff at the leasing stage,” he said.

Tisdel said conservation groups are looking to apply language in the Federal Land Policy and Management Act that addresses “unnecessary and undue degradation and permanent impairment” as an argument against leasing.

“Those terms haven’t been defined relative to fossil fuel development,” Tisdel said. “How can you define those terms in the context of the climate crisis and this carbon budget analysis that shows U.S. emissions are hugely important to a global carbon budget?”