Bribery and blackouts: Inside an Ohio utility’s troubled past 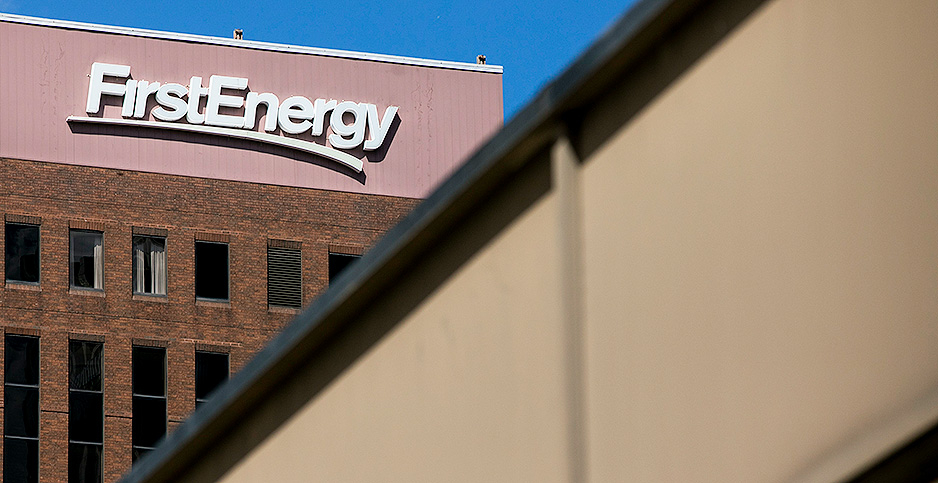 A view of FirstEnergy Corp. headquarters in Akron, Ohio. The company is caught up in an alleged $60 million bribery scheme over a massive 2019 bailout of its nuclear plants and has a history of run-ins with federal authorities. Kris Tripplaar/Sipa USA/Newscom

For the third time in the past two decades, Ohio-based power company FirstEnergy Corp. faces official accusations of grave violations of the public trust.

Last month, the Justice Department implicated the company in funding what became a covert, $61 million lobbying and money-laundering conspiracy to win a state bailout of its money-losing nuclear plants in Ohio, according to a criminal indictment (Energywire, July 22). Ohio lawmaker Larry Householder (R) was ousted as House speaker late last month over his suspected role in the alleged "dark money" scheme paid for by FirstEnergy.

The allegations are again raising questions about FirstEnergy’s ethical standards that recall the darkest chapters of the $16 billion company’s history.

"FirstEnergy’s public reputation is terrible, and they are back in ill repute with the public," said John Damschroder, an Ohio political commentator who formerly worked in Republican Gov. George Voinovich’s administration.

The outcome of the case against Householder and four associates could have repercussions for Ohio energy policy, considering FirstEnergy’s heft in the state, and for the company’s bottom line. The accusations rattled FirstEnergy shareholders, sending the company’s stock down by nearly half its price before a partial recovery in the past two weeks.

"While FirstEnergy may suffer some consequences depending on the extent of its involvement in any alleged scheme, it is not clear how severe the repercussions may be for the company, particularly because it has worked so hard to extricate itself from ownership of the assets at the center of the scandal," S&P Global Market Intelligence said, referring to the nuclear plants FirstEnergy spun off.

Yet the accusations in Ohio also highlight two earlier scandals with FirstEnergy, renewing debate about its corporate culture and highlighting how local cases can ripple beyond the company’s Akron headquarters.

In 2001, employees and contractors lied to federal regulators concerning the safety of the company’s Davis-Besse nuclear plant on Lake Erie, about 20 miles east of Toledo, the DOJ concluded following its criminal investigation of the company.

The deception delayed the detection of highly dangerous corrosion of the reactor vessel that could have set a meltdown crisis in motion, safety officials at the Nuclear Regulatory Commission said. To avoid federal prosecution, the company accepted "full responsibility" for the cover-up and was fined a record $28 million under the 2006 settlement with DOJ.

Then on Aug. 14, 2003, a cascading power blackout began in FirstEnergy’s Ohio system and swept through Pennsylvania and around Lake Erie to Detroit, cutting off power to 50 million people. Economic damages were estimated to be as high as $10 billion.

A U.S.-Canadian investigation — led by the U.S. secretary of Energy and Canada’s minister of natural resources — faulted the utility for violating voluntary, industry-set operating guidelines aimed at preventing just such a massive outage. FirstEnergy failed to adequately trim trees near its high-voltage lines or properly train and equip control room operators responsible for a vital segment of the eastern U.S. power grid, the officials said.

While other companies and grid operators shared some blame, FirstEnergy bore the overwhelming responsibility, the U.S.-Canadian task force said. The causes of the outage "did not leap into being that day," investigators concluded, but were the product of "long-standing institutional failures and weaknesses that need to be understood and corrected in order to maintain reliability."

Asked about comparisons between FirstEnergy’s involvement in the Householder case and the 2003 blackout and Davis-Besse incidents, FirstEnergy spokesperson Jennifer Young referred to a statement from FirstEnergy CEO Chuck Jones after the Ohio scandal broke:

"Ethical behavior and upholding the highest standard of conduct are foundational values for the entire FirstEnergy family and me personally," Jones said.

Investigators in both the Davis-Besse and 2003 blackout cases castigated First Energy for a flawed corporate culture that placed profits ahead of addressing well-known threats. The question left unanswered in each was where, exactly, did responsibility fall within FirstEnergy’s leadership.

The institute has published documents showing close financial and lobbying ties between FirstEnergy and its former nuclear power subsidiary, which reemerged from a bankruptcy organization in February as a separate company, Energy Harbor.

"Who wound up paying the $61 million" that went to Householder’s alleged conspiracy? Anderson asked. "That will be an important question for Ohio."

A similar "who knew" question in the Davis-Besse investigation centered on a handful of supervisors far down the management ranks.

An inspection of the nuclear plant in 2002 revealed a dangerous hole in the reactor head’s 6.6-inch-thick steel wall, caused by years of corrosion from boric acid leaking from inside the vessel through a cracked connection.

That category of potential corrosion had been known within the industry and the NRC for a decade, and safety regulators had issued alerts to FirstEnergy and other reactor operators. But the DOJ concluded that FirstEnergy lied about the thoroughness of prior inspections of the Davis-Besse reactor. FirstEnergy supervisors informed the NRC that there was no leak danger in order to keep running the plant and collecting revenue from its power for a few more months until a scheduled refueling shutdown of the plant in March 2003.

Only then did an inspection reveal the football-sized hole in the reactor vessel. A thin stainless steel liner was all that was left to contain the radioactive fission reaction inside the pressurized vessel at that point.

An NRC Davis-Besse task force spelled out 51 corrective actions FirstEnergy had to take, most of them approved by the commission. The plant remained shut down until March 2004 while the company replaced the corroded equipment at a $605 million cost and completed other requirements.

The NRC report rebuked the company for "a long-standing acceptance of degraded equipment, poor engineering, a practice of addressing the symptoms of issues instead of resolving their causes."

The NRC action was followed in 2006 by the DOJ settlement and fine, as well as the indictments of two former Davis-Besse employees and a former contractor for allegedly lying to the NRC. The blame went further. The company "broke the public trust," DOJ attorney David Uhlmann said during a press conference at the time.

The Justice Department said it chose a fine instead of criminal prosecution then, saying it saw evidence that FirstEnergy had changed its culture and now was focused on safety.

The nuclear plant is still running and is licensed to operate until 2037. Facing competitive pressure from cheaper renewable and gas-fired generation, FirstEnergy put forward plans to shutter the plant in 2018, only to reverse course and keep Davis-Besse online after Ohio lawmakers enacted the bailout at the center of the current bribery scandal.

The nuclear industry has cited Davis-Besse and other plants as important in addressing climate change, considering their low emissions. "If they don’t preserve those plants, it will create a very significant [power] deficit that will be hard to overcome," Nuclear Energy Institute President Maria Korsnick said in a 2019 presentation, according to the Toledo Blade.

In the affidavit last month, federal prosecutors implicated FirstEnergy in an "unholy alliance" with Householder to save the company’s nuclear plants, including Davis-Besse. The scheme steered hidden funds from ratepayers to buy the support of legislators for the $1.3 billion nuclear rescue bill and then attempted to corrupt a public ballot referendum seeking to block the legislation, the DOJ alleges.

In the 2003 blackout, a massive shock wave of electric power broke out of Ohio at 4:05 p.m. Aug. 14 and spread around the Great Lakes, causing a cascade of outages as generators, transformers and power lines shut down automatically to protect against gyrating voltage and current levels.

It started a chain reaction that operators could not control.

By 4:13 p.m., generation units at 265 power plants had been lost, cutting off power to 50 million people from New York City to Detroit, leaving thousands of commuters to trudge or hitchhike back to darkened homes or spend the night in powerless office buildings.

The U.S.-Canadian task force pinpointed the blackout’s start to a sequence of short circuits in FirstEnergy’s high-voltage network beginning at 3:05 p.m. Power lines sagged in the summer heat, touching trees that should have been trimmed. Generators kept running, and more lines soon followed.

But FirstEnergy grid operators had no idea what was happening. Alarms intended to alert them failed. Computers went down.

Not until around 3:46 p.m. did workers realize their system was in jeopardy. They lacked the wall-sized interactive system maps commonplace in most grid control rooms — FirstEnergy hadn’t installed them.

By that point, the only way the blackout might have been prevented would have been to cut off power to parts of Cleveland and Akron to rebalance the system. "No such effort was made," the task force said.

H. Peter Burg, then the chairman and CEO of FirstEnergy, said in congressional testimony the month after the blackout that the event "can only be the result of a combination of events" in the eastern half of the U.S.

"We do not believe that events on any one system could account for the widespread nature of the outage," he said.

Burg did not mention the overgrown tree issue.

Jones, then FirstEnergy’s senior vice president for power delivery, contested the task force’s conclusions in November 2003. "We believe there were hundreds of things that were abnormal on this day that have to go into the equation," he said, quoted in The Washington Post that November.

The task force rejected that argument, citing a second-by-second engineering reconstruction of the event and recordings of phone conversations between panicking control room employees in FirstEnergy’s network and other grid operators.

"We have no clue," a FirstEnergy control room operator said in a frantic phone call with a regional grid operator, as monitoring instruments revealed a multistate network lurching out of control. "Our computer is giving us fits," the operator said. "We don’t even know the status of some of the stuff around us."

FirstEnergy "did not respond to loss of its transmission lines because it did not have sufficient information or insight to reveal the need for action," the task force concluded.

The task force did not report conclusions on why reliability guidelines were broken and ignored, and how FirstEnergy’s leadership was responsible. "That was not the mandate," one official said.

Congress two years later passed a far-reaching Energy Policy Act, which created a system of mandatory grid reliability controls to be drafted and voted on by grid company representatives and overseen by the Federal Energy Regulatory Commission.

Now, in the Ohio bribery scandal, the powerful utility and its former nuclear power business have been identified — though not by name — in government charges against Householder and four alleged co-conspirators, including a lobbyist for FirstEnergy’s nuclear subsidiary (Greenwire, July 24).

"Somebody’s going to have to get interested in where the money came from and, indeed, what was the relationship between Jones and Householder and the lobbyists," said Anderson of the Energy and Policy Institute.

Following the indictment of Householder and his partners, Jones admitted his company was responsible for about one-quarter of the $61 million in payments to the alleged bribery conspiracy but said the company’s contributions were legitimate, made to benefit FirstEnergy’s customers. The DOJ indictment and an earlier criminal complaint imply the company’s CEO — presumably Jones — and FirstEnergy funding were linked to the conspiracy but don’t spell out the connection. The investigation is continuing, the DOJ said.

Andrew DeVries, senior analyst at CreditSights, said so much depends on the results of that investigation. "That is the million-dollar question, isn’t it?" he said.

"CEO Chuck Jones certainly came out swinging and declaring neither he nor the company did anything wrong," DeVries added. "If he knows there were wiretaps and he knows they [DOJ] are seeking more whistleblowers, he must have a very, very strong basis for making that statement."