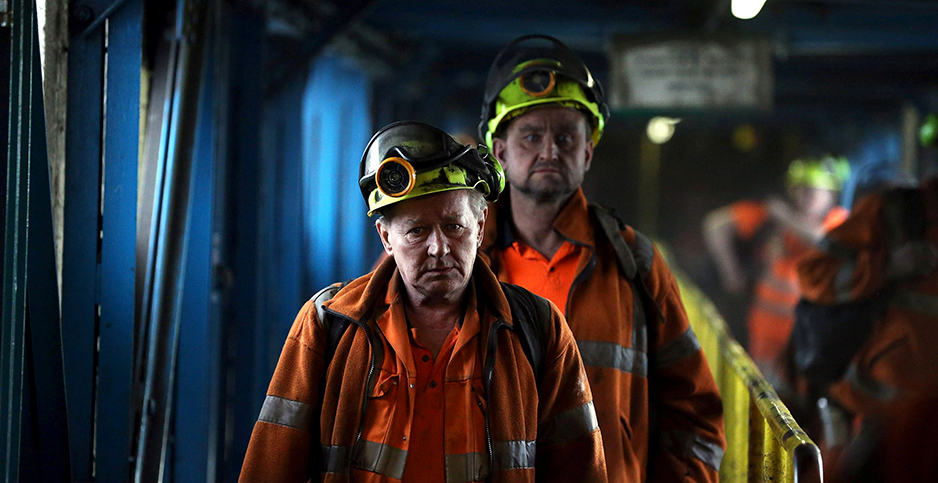 Miners exit Kellingley Colliery for the last time in 2015. It was the last deep coal mine to operate in England, and its closure ended centuries of coal mining in Britain. Nigel Roddis/REUTERS/Newscom

George Orwell once observed British civilization was "founded on coal." The author of "1984" would hardly recognize his home country today.

Coal, which fueled the factories, steam engines and power plants that made Britain the center of the Industrial Revolution, has all but disappeared from the United Kingdom. The country’s last deep-pit coal mine closed in 2015. Now, the fuel is poised to vanish from its electric system.

Britain concluded a 67-day stretch without any coal generation earlier this month, when a coal plant operator briefly turned on a boiler in Yorkshire to conduct routine maintenance. The government has set a 2024 deadline for phasing out the country’s two remaining coal plants. And the national grid operator is shifting its focus from retiring coal to moving beyond gas.

"We talk about the renewables being baseload and what you need to do to top that up," said Julian Leslie, head of networks at National Grid, the British grid operator. "It is a fundamental shift."

The lack of coal in Britain has symbolic resonance: The birthplace of the Industrial Revolution is now home to a green revolution. In 2008, coal accounted for roughly a third of British power demand. Coal generated 2% of the country’s power last year while renewables accounted for more than a quarter of electricity production. Zero carbon resources, like renewables and nuclear, made up almost half of Britain’s power supply.

The climate picture is more complicated.

Government figures show emissions in the United Kingdom fell 30% between 2008 and 2019. But Britain accounts for a tiny sliver of global emissions.

The 396 million tons of CO2 associated with the United Kingdom’s energy use in 2019 represented 1% of global energy emissions, according to BP PLC. In that respect, the true test of the United Kingdom’s climate progress may be its ability to export green technology much as it once nurtured the growth of coal.

Simon Evans, the deputy editor of Carbon Brief, reasons some parts of Britain’s evolution will be easier to replicate than others. The country imposed new air quality rules and a minimum carbon price on electricity generation, prompting a wave of power plant closures, while lavishing subsidies on renewables.

Some aspects of the shift might be more difficult for other countries to emulate.

For one, the U.K.’s coal plants were already old. The political influence of its mining industry was also greatly diminished after former Prime Minister Margaret Thatcher broke a miners strike in the 1980s. Both of those factors, combined with a wider economic shift from industry to services, have made it easier for the country to move beyond coal.

"The most important message I would hope people would take from it is there have been lot of contributors to the success of Britain in terms of getting off coal," Evans said. "Some of the progress that’s been made has been accidental and some of it has been deliberate."

The world will need to follow in Britain’s footsteps if it is to have any hope of keeping global temperature rise to 1.5 degrees Celsius. The United Nation’s International Panel on Climate Change reported global coal use will have to be virtually eliminated by 2050 to achieve a 1.5 C target. Coal consumption today is falling in Europe and North America, but it is growing in Asia.

The challenges for other countries vary.

China’s industrial economy is dependent on coal, which provides electricity to its factories and coke for its steel mills.

In Germany, industry and mining interests have pushed for a slower phase out of coal. The 2038 deadline adopted by Berlin this year is too slow for many German greens.

The United States, which has mirrored much of Britain’s evolution in the power sector, will be hard pressed to match Britain’s broad bipartisan support for climate action.

President Trump has championed coal use and repealed environmental regulations. His British counterpart, Prime Minister Boris Johnson, shares many of the American president’s nationalistic tendencies, but sharply diverges with Trump on climate. Johnson has pledged to put Britain on course for net-zero emissions by 2050 (

Like most nations, nearly all of Britain’s emission cutting progress has come from power plants, where carbon dioxide output was down 67% between 2008 and 2019. The country faces difficult decisions going forward over how to green home heating, transportation and other sectors of the economy, analysts said.

But most noted the country’s gains are a testament to the clear climate goals set by the government.

The United Kingdom’s Committee on Climate Change, established in 2008, issues regular emissions budgets and recommendations for how to achieve additional cuts in CO2. Greens and industry representatives say those policies have given the business sector certainty and prompted it to plan for change. The growth of offshore wind is particularly telling.

The subsidies have spurred a massive reduction in prices, driving costs from around £150 per megawatt hour in 2014 to £40 per MWh last year, according to government figures.

"The main lesson is the importance of policy," said Matt Gray, managing director at Carbon Tracker, a London-based financial think tank that studies the impact of the transition to clean energy. "The U.K. got it right because they had the carrot and the stick and they rolled it out simultaneously."

Unlike the U.S., there is comparatively little debate over the reliability of the British power system. Leslie of National Grid said the country’s grid is more reliable today than ever.

Grid operators traditionally looked at how much nuclear, coal, oil and gas generation was needed to meet electricity demand. Coal and nuclear units in particular ran around the clock, providing baseload power to the grid.

National Grid now looks to renewables first, forecasting how much demand can be met by sources like wind and solar and then making up the difference with fossil fuel generation, Leslie said.

Gas nevertheless accounts for 38% of British power production and is particularly important in the winter months, when renewable output wanes. The country employs a capacity market similar to those used in the U.S., where power generators are paid to remain on standby.

But National Grid is increasingly trying to envision a world without gas.

It recently put out a bid for low-carbon black start capabilities, or the ability to balance the grid when a generator trips offline, Leslie said. Such services are typically the domain of fossil fuels. Eventually, the grid operator would like to see solutions like compressed air storage, long-duration batteries or hydrogen replace gas altogether.

"We’ve got a net-zero target by 2050, which means we’ve got 30 years to solve this massive challenge," Leslie said. "At some point you can’t afford to be burning gas in Great Britain in the next 30 years."