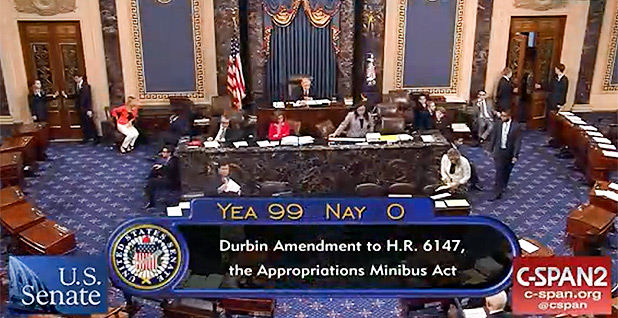 The Senate started voting yesterday on amendments to the latest spending package. C-SPAN

Congressional work on finalizing fiscal 2019 spending bills is being delayed until September, even as the Senate remains on track to move its proposed funding for the Interior Department and EPA by the end of this week.

The development has spawned a series of conflicting political predictions over the fate of efforts to finalize appropriations bills before the new fiscal year begins.

House and Senate appropriators said yesterday that differences over how to divide up $1.24 trillion in discretionary spending for the coming year have forced them to delay conference talks this week on the first three-bill legislative package, pushing that work until after both chambers return from their August breaks in September.

The package, known as minibus No. 1, contains the energy and water spending bill and had been expected to be ready for the president’s signature by August.

"We ought to be able to do this the first week we are back in September," said Rep. Mike Simpson (R-Idaho), the chairman of the House Energy and Water Appropriations Subcommittee, adding that he expects the spending to be in place on Oct. 1, the start of the new fiscal year.

Simpson said leaders have to determine whether to set top-line energy-water spending at the House’s proposed level of $44.7 billion versus the Senate’s $43.7 billion. He said the question of where to set the level is intertwined with other funding issues, including a bipartisan push to increase spending on veterans.

Senate Appropriations Chairman Richard Shelby (R-Ala.) downplayed the delay, saying many of the funding differences could be worked out over the August recess.

"As long as our staffs are working together, as long as we are moving things here on the floor, we are making progress," Shelby told reporters yesterday.

The House is expected to leave this week until after Labor Day, while the Senate currently plans to be in session most of August.

Shelby seemed undaunted, saying he expects a second minibus to clear by the end of this week. He said next week the Senate could consider a two-bill package containing the Defense and Labor-Health and Human Services-Education bills, which together account for about 75 percent of all discretionary spending.

Status of minibus No. 2

It contains the Interior-EPA, Transportation-Housing and Urban Development, Agriculture, and Financial Services bills.

The Senate has debated the measure this week without adding any controversial amendments — an issue that has doomed the bill in recent years, often keeping it off the floor.

Senate appropriators say the lack of discord proves that a bipartisan accord to avoid attaching contentious riders to speed spending bills through the chamber is holding.

"I am feeling pretty good where we are right now," said Sen. Lisa Murkowski (R-Alaska), the Senate’s top Interior-EPA appropriator. She did not rule out a manager’s amendment that could incorporate noncontroversial provisions.

The Senate yesterday voted by large majorities to attach a handful of provisions to the package, including:

Sen. Cory Gardner (R-Colo.) has proposed an amendment that would provide a permanent reauthorization of the Land and Water Conservation Fund, with a requirement that at least 1.5 percent of its annual funding go toward expanding public access for hunting, fishing and other recreation.

"We are going to be pressing for a vote. There should be no controversy. It has overwhelming support, so we’re just trying to get a vote," Gardner said.

While the LWCF generally attracts bipartisan backing, attaching it would seem to violate the deal to keep the bill free of policy riders. It would also be at odds with the House, which declined to take up a proposed LWCF reauthorization on its version of the spending bill.

Simpson, however, dismissed talk that the Senate was avoiding policy provisions for spending bills. He said senators instead are putting them in before they hit the floor at the committee level, then claiming credit for not including add-ons.

"For them to come out and say, ‘Ah, we have kept ours free of any controversial riders,’ bullshit — that is just not true," said Simpson, predicting both sides would have to compromise on policy provisions in conference negotiations to get new spending in place.

The White House, meanwhile, weighed in yesterday on the latest Senate spending package — avoiding a veto threat but noting that proposed Interior and EPA spending is billions above its fiscal 2019 budget request. The administration also said it’s pleased with the bill’s support for expanding energy exploration on public lands and targeted EPA Superfund and water grant spending.