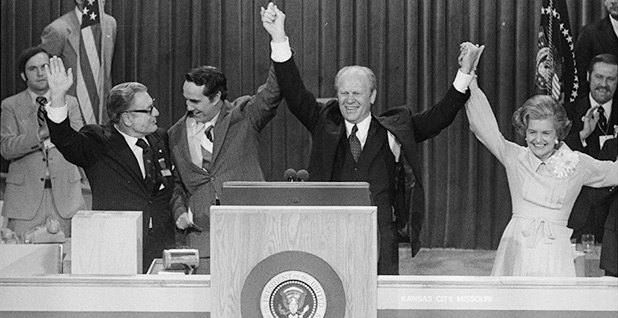 In a unique presidential primary season with the potential for a brokered Republican National Convention this July, GOP delegates headed to Cleveland might want to think of their votes less as ballots and more like golden tickets.

And if the last contested convention melee is any indication, Republicans this summer could be in for a wild ride.

Ahead of the 1976 convention in Kansas City, Mo., then-President Ford was fighting to stem a challenge from former California Gov. Ronald Reagan, and the incumbent pulled out all the stops: Dozens of delegates visited the White House for photo ops; he deployed his daughter, Susan, to speak at a GOP youth camp; and he personally listened to demands for pork-barrel spending, including a pitch for sewage infrastructure in Long Island.

Supporters of the president — even the U.S. Virgin Islands’ set of four delegates and four alternates — earned face time with Ford, who according to papers filed with the Gerald R. Ford Presidential Library was urged to remind the group that "he is the only one who can win in November."

"This is a friendly delegation that wants to feel a part of the action," Paul Manafort, who coordinated delegates for the Ford campaign — and who will do the same for Trump, the businessman confirmed to The New York Times on Monday — wrote in a July 1976 memo to White House Operations Office Staff Assistant Jim Fields.

While Reagan lacked the power of the incumbency, the conservative icon likewise worked tirelessly to sway delegates, including 45-minute telephone conversations with would-be supporters.

And rabid supporters of both candidates sought to sway the delegates themselves — even resorting to "hate mail" and pamphlets urging delegates: "Don’t sell this country out to the Communists," former New Hampshire Senate President David Nixon told Newsweek in 1976.

"If the primary season is typical, then it could be a nasty, vicious convention in which no one would win," Nixon, a Ford supporter, said at that time.

The battle over support between Ford and Reagan became so heated that at one point, the White House touted news that a single New York delegate had switched his allegiance — an alternate had inadvertently cast his ballot for Reagan, when the delegate supported Ford, according to media reports at the time.

Four decades later, Republicans face similar prospects for a political donnybrook in Cleveland, and the fight for the 1,237 delegates needed to win the nomination could potentially play out in much the same way — although trips to the White House and photos with a sitting president could be replaced with visits to Mar-a-Lago and Texas.

Stanford University political science professor Morris Fiorina noted that Republican delegates are party officials, not public officials, suggesting that various ethics rules that typically apply to elected officials — for example, barring the acceptance of gifts or travel — may not apply.

"To me, it doesn’t seem at all unrealistic that Trump could say, ‘I’m inviting all these people down to a big conference,’" Fiorina told Greenwire. "I can’t see why Trump wouldn’t engage in that kind of behavior."

While Texas Sen. Ted Cruz would be unable to use his Capitol Hill office to sway would-be supporters, Fiorina suggested that the Texas senator’s campaign could find assistance from political nonprofits or charities whose views align with his.

"You can imagine some deep-pocketed supporters of Cruz staging the same of kind thing that Trump could stage on his own," Fiorina said. "He wouldn’t be unarmed going against Trump in this sort of thing."

Forty years ago in Kansas City, the maneuvering paid off for Ford; he won on the first ballot with 1,187 votes, even if his supporters weren’t all that enthusiastic.

"He’s preferable over the only other choice there is, and he is the incumbent," Nixon said at the time.

Still, there was no need to move to a second ballot, something the Republican Party has not had to face since the 1948 convention — a time when so-called brokers, or governors, mayors and other party big wigs, still controlled blocs of delegates and could make backroom deals for their support.

Nearly seven decades later, that leaves many questions about how a brokered convention would play out.

Much of the uncertainty will rest on exactly how close Trump comes to earning the 1,237 delegates he needs to win the GOP nomination outright by the time the primary election cycle ends in June.

To date, the businessman and former reality TV star claims 739 delegates, followed by Cruz with 465 and Ohio Gov. John Kasich with 143, according to an Associated Press tally.

If he arrives in Cleveland just shy of the threshold, Fiorina said, some Republican delegates could opt to support him as a measure of respect for the party’s process.

"If he’s very close, people may throw in the towel and say any attempt to deny him now would hurt the party," Fiorina said.

That’s a message Trump has touted publicly in recent days, even as his campaign begins to target the more than 300 uncommitted delegates expected to remain after the primaries end.

In a recent interview on CNN, Trump said it is "mathematically unfair" that he must reach the full threshold to win the Republican nod, pointing to the large size of the GOP primary field that began with more than a dozen candidates.

"When you talk about the majority-plus-one, it’s a very unfair situation because we had so many people running for office," Trump said.

Trump skirted a question over whether he will seek to change RNC rules requiring that he meet that threshold but added: "Now, if I have millions of votes more and have 1,100 and somebody else is down in 400 or 500, I think it’s awfully tough to take all of these people out of the system."

He continued to make similar remarks yesterday, including another appearance on CNN’s town hall for Republican candidates in Wisconsin last night.

Trump rescinded a pledge made earlier in the election cycle in which he said he would support the eventual Republican nominee, stating: "No. I don’t anymore."

Asked by a moderator to clarify, he added: "No, we’ll see who it is."

But Cruz, who has called the idea that he will remain significantly behind Trump in the delegate count "fanciful," insisted in a separate interview with CNN that the convention should decide the nomination.

"We’ll be neck and neck, and if that happens, then the convention is going to decide," he said last week, and later added: "I believe we win that and win that by earning the support of the delegates elected through the democratic process."

But that democratic process will likely rely heavily on strategy, like a brewing battle over the Cruz campaign’s domination of the Louisiana delegate selection committee.

Trump accused Cruz over the weekend of "trying to steal" convention delegates in Louisiana — where Trump narrowly won a first-place finish, and each candidate is set to receive 18 delegates. His campaign told The New York Times on Monday it would challenge the delegate selection process.

"I have millions more votes/hundreds more [delegates] than Cruz or Kasich, and yet am not being treated properly by the Republican Party or the RNC," Trump wrote on his Twitter account yesterday. His campaign did not respond to a request for comment for this article.

The fight is also keyed to the state’s five uncommitted delegates, which represent a small portion of the 159 delegates pledged to Florida Sen. Marco Rubio (R) before he ended his presidential candidacy this month.

Delegates pledged to Rubio and other Republican contenders who have ended their bids could prove vital in a brokered election — although rules vary from state to state over whether those delegates must still support those candidates on the first ballot, subsequent ballots or until they are formally "released" by their nominee.

Wilson pointed to Texas’ own delegates, who will heavily favor Cruz on the first ballot — with 104 of its 155 delegates — because he topped the state’s March primary.

But on a second ballot, Cruz would be expected to gain even more support from his home state.

"It is likely that a lot of Texas’ Trump delegates will actually be Cruz supporters who will be bound to support Trump on the first ballot but will likely bolt to Cruz at the first opportunity thereafter," Wilson said.

Moreover, both Trump and Cruz will want to be able to count on support from uncommitted delegates and those who must support another candidate in the first round — since it is unclear how much time will pass between ballots.

Temporary rules adopted at the 2012 convention indicate only that a roll call vote must be conducted until a nominee receives a majority of support. The RNC and its convention committees must still adopt final rules for the 2016 convention.

"They might hold a second one fairly quickly just to see where the released delegates go. It’s really hard to predict," Fiorina said.

Former RNC General Counsel Ben Ginsberg said he expects about three-fourths of all delegates would become free agents on the second ballot.

"Campaigns will have to invent terrific new databases to be able to track, contact, be able to know who the delegates will most be persuaded by," Ginsberg said on C-SPAN last week.

During the 1976 cycle, South Carolina’s 36-member delegation was heavily in favor of Reagan’s candidacy and under pressure from the state’s then-governor to commit to the Republican challenger.

The move backfired, however, peeling off some supporters in places like South Carolina.

"This has created a climate for other delegates to move," Field wrote to Ford in early August 1976 before the state’s delegation visited the White House.

But whether Trump or Cruz will name his running mate in a still-undecided nomination fight remains to be seen.

Both Cruz and Kasich have rejected the idea of becoming Trump’s running mate, and Cruz has likewise denied rumors that he could name Rubio as his running mate.

A contested convention could also require shifts in other traditions of the proceedings.

"If there is not a majority of delegates achieved by any one candidate, you have to ask the question, which first lady speaks on the first night of the convention? What do you do about the keynote address? When do you start the business of voting?" Ginsberg said, and later added: "Anything is possible at this stage."

‘Uncommitted and likes it’

Of course, sometimes a delegate just can’t be won over, no matter what.

When New York delegate Ralph DeBlasio was invited to the White House in July 1976, a memo to Ford from his staff described the delegate as "a very volitile [sic] commodity."

"Listed as uncommitted and likes it that way although he is expected to support the President in the final analysis," the memo added.

But ultimately, DeBlasio cast his ballot for former President Nixon’s Attorney General Elliot Richardson — the sole vote for neither Ford nor Reagan in the 1976 convention.

"I never experienced such hatred," DeBlasio later described his experience, according to his 2007 obituary in The Villager of New York. "They opened my ballot as they passed it forward and announced the name ‘Elliot Richardson.’ Catcalls, cursing, everyone turned toward me with real fury."