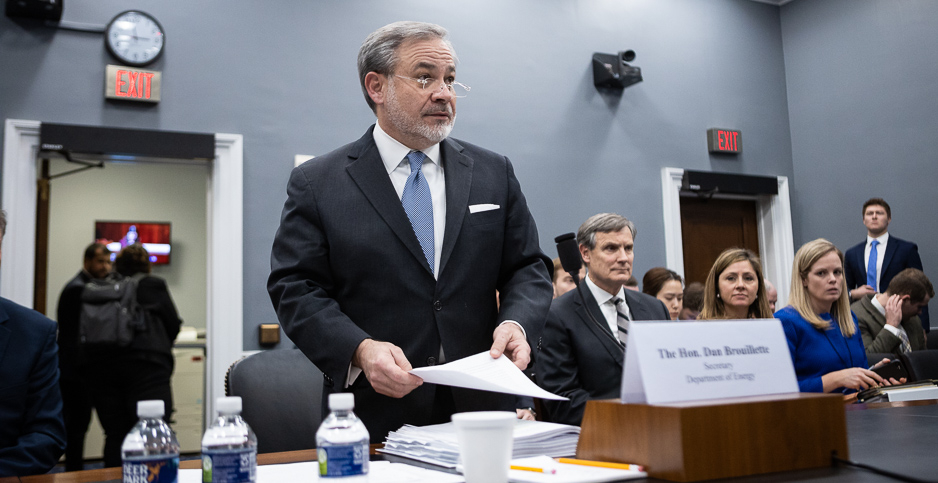 Energy Secretary Dan Brouillette suggested yesterday it could one day be possible for the United States to reach 100% renewable energy, a goal of climate change activists.

Testifying before a House Appropriations energy subcommittee, Brouillette said the Department of Energy is committed to developing large-scale battery storage to increase the use of renewable energy.

"That allows people to move even further, perhaps even to one day where we achieve a goal of 100% renewables," Brouillette said. "Who knows."

He offered no timeline, noting the use of renewables on a massive scale couldn’t be done "today," but said the department is "fully committed" to the research.

Many environmental advocates want Congress to push the country to 100% clean energy within a decade, a goal that Republicans have greeted with skepticism.

When the Democrats’ Green New Deal to curb greenhouse gas emissions was proposed last spring, then-Energy Secretary Rick Perry dismissed it as a "fantasy," and a DOE official at the helm of the administration’s grid reliability efforts cautioned about the push to reach 100% renewable energy (Greenwire, March 1, 2019).

Brouillette yesterday noted that the adoption of renewable technology has "grown at an enormous clip" and that the Trump administration believes that "energy diversity" is critical to energy security and national security.

"All of these renewable technologies need to come online," he said.

DOE’s budget request would set aside $190 million in total for the Energy Storage Grand Challenge, which sets 2030 goals for energy storage and calls for partnerships and funding opportunities to boost the technology.

DOE is looking to launch a dedicated cross-program research effort for grid-scale storage meant as a 10-year challenge to reduce the costs and deployment of storage technologies, similar to DOE’s SunShot Initiative for solar.

That total funding includes $40 million for a "Grid Storage Launchpad" within the Office of Electricity. The Office of Energy Efficiency and Renewable Energy, meanwhile, would see $97 million dedicated to supporting the Energy Storage Grand Challenge.

"The next generation of batteries, we think, will revolutionize how renewable energy can be integrated into the grid," Brouillette said in a call with reporters earlier this month. "It will make wind and solar more reliable."