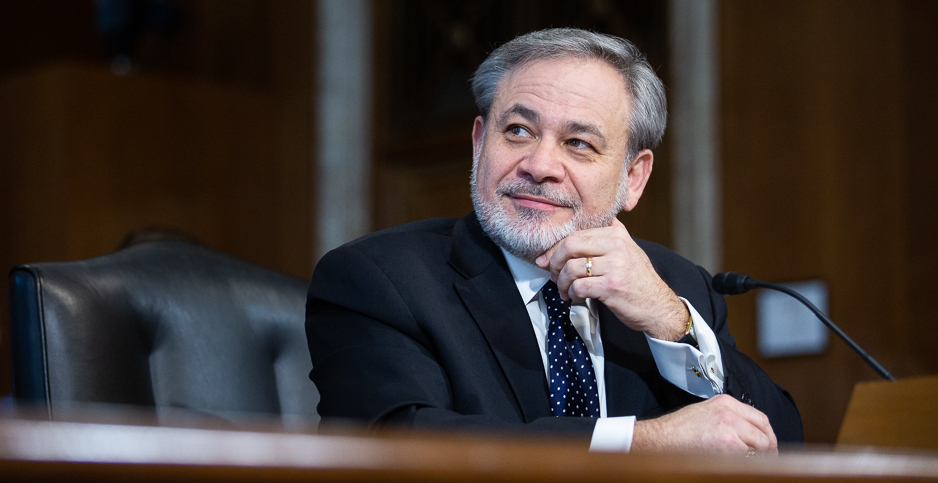 Energy Secretary Dan Brouillette is striking a different tone on climate change than his predecessor, Rick Perry, who before taking office declared it "a contrived, phony mess that is falling apart under its own weight."

But just how different is Brouillette?

And when the International Energy Agency released a February report finding global emissions were flat in 2019, Brouillette, who served as deputy secretary under Perry, called it "proof positive that innovation and technology are the solution to the world’s climate challenges."

"Global emissions flattened and were offset by reductions in the United States and other nations that have successfully deployed carbon capture, renewable energy, natural gas and nuclear power," he said in a press release.

Last week, Brouillette suggested it could be possible for the United States to reach 100% renewable energy, a goal of climate change activists (Energywire, Feb. 28).

Those moves — given amid President Trump’s aversion to acknowledging the threat of climate change or silence on the issue — are encouraging to some.

Sen. Jon Tester (D-Mont.), who said his home state had reached an unseasonably warm 55 degrees this winter and that he worries about "cooking the planet," told Brouillette yesterday that he had the "impression" that Brouillette is concerned about climate change.

Brouillette did not disagree, telling him, "Sure. I think it’s something that we have to address." But, he added, "doing something about it’s a different story. I know we have an impact; the question is, what can we do? And that’s one of our roles at Department of Energy."

Melanie Kenderdine, who ran DOE’s Office of Energy Policy and Systems Analysis under former Obama-era Energy Secretary Ernest Moniz and is now a principal at the Washington-based think tank Energy Futures Initiative, praised Brouillette’s decision to elevate a new Office of Strategic Planning and Policy that Perry had downgraded. The key policy office, which Moniz stocked with talent from the climate and energy arena, now reports directly to Brouillette rather than an undersecretary (Energywire, Jan. 29).

"I have run the DOE policy office twice and think it is tremendously effective and important that it directly reports to the secretary," said Kenderdine. "This recent reorganization restores this reporting chain — a plus for energy policy analysis that is unbiased by reporting chains."

Others say his comments may simply be a function of Brouillette’s tempered approach than any shift in policy, noting his loyalty to fossil fuels — a critical message under Trump. The Department of Energy did not respond to requests for comment.

Brouillette told senators at his November confirmation hearing that he’s committed to carbon capture research to remove carbon dioxide emissions as he argued that fossil fuels are likely to remain a source of the world’s energy needs for the next 40 to 50 years.

"I think we have an obligation if we care about the climate, if we care about minimizing the carbon impact of the use of these fossil fuels, we have to get these technologies off the shelf," he said (Energywire, Nov. 15, 2019).

Like Perry, Brouillette in the past has questioned the extent to which humans play a role in warming, and he backed Trump’s decision to withdraw from the Paris climate agreement.

"I view it as not so much a change in the administration’s perspective, but a function of [Brouillette’s] personality," said Tom Pyle, the president of the American Energy Alliance who led the Trump DOE transition team.

Brouillette’s first job in the nation’s capital was in the office of former Louisiana Rep. Billy Tauzin — then a Democrat, now a Republican — and Brouillette worked on the Hill at a time when climate change wasn’t so sharply partisan, said David Hart, director of the Center for Science, Technology and Innovation Policy at George Mason University’s Schar School of Policy and Government.

"Once upon a time in America, everybody talked about it that way," Hart said.

Hart said he was encouraged by Brouillette’s elevation of the policy office but said there’s a risk that DOE would run in pushing policy to the White House: "You get too high a profile and out of step, you’d get slapped down," he said.

Brouillette’s comments come amid a larger Republican effort to shift the debate on climate change, an increasing priority for younger voters. Some Republican strategists believe it’s also an opportunity to draw contrasts with Democratic proposals.

Trump, who has already signaled he wants to make the Democratic Green New Deal a campaign target, has shifted his response to climate change, from routinely dismissing it as an "expensive hoax" to last month insisting it was a "serious subject" that is "very important" to him.

Despite the language, the administration has made rolling back environmental regulations a priority. And Brouillette echoes the White House’s belief that it can cut greenhouse gas emissions with innovative technology, not by mothballing oil, gas and coal.

"You can’t expect a Cabinet secretary to get out in front of the president, his boss, but you do see a softening of Republicans and how they’re speaking about the environment and using the word ‘climate,’" said Heather Reams, executive director of the conservative clean energy organization Citizens for Responsible Energy Solutions. She noted Perry by the end of his term was championing cleaner energy sources.

"Republicans have traditionally thought if you believed in climate change that means you wanted to dismantle capitalism," Reams said. "And now Republicans are trying to figure out what are the smart policies."

"You’re seeing more willingness to acknowledge the existence of the problem, but they’re not going to do anything they see as regulatory or anti-fossil fuels," said Brett Hartl, chief political strategist at the Center for Biological Diversity Action Fund. An increasing number of Republicans "see the writing on the wall, which is that demographically, denying that climate change exists is a dead end," he said.

Former Rep. Carlos Curbelo, a Miami Republican, said that four years ago when he called on his party to act on climate change, GOP leadership didn’t give him the time of day. Now, House Minority Leader Kevin McCarthy (R-Calif.) is championing legislation (Greenwire, Feb. 12).

"They’re actually trying to own an issue that they at best ignored, at worst denied," Curbelo said, adding that he hopes Democrats don’t dismiss what he sees as a "significant evolution" by the GOP.

"Even if people think it’s not sincere, that’s actually kind of secondary," he said. "Elected leaders across the political spectrum are feeling pressure to seriously address this issue."

Paul Bledsoe, a former Clinton White House climate aide and strategic adviser at the Progressive Policy Institute, said Republicans such as Brouillette are being "forced to practice a kind of double-speak on climate change" because of Trump’s antipathy.

"If they deny too forcefully, they risk being ostracized by the business community and scientists who recognize the challenge," Bledsoe said. "But if it’s too forceful on advocacy, they risk the president’s wrath. It’s not reasonable to expect anyone in the administration to take an aggressive, pro-climate action position."

What has Brouillette said?

Like other Republicans, Brouillette’s rhetoric on the issue has fluctuated in the past three years.

In 2017, Brouillette did not mention climate change in his prepared remarks when he appeared for Senate confirmation for deputy secretary.

Democratic Sen. Mazie Hirono of Hawaii in questions for the record called it a "concerning omission" and asked him to explain.

The nominee walked a fine line, writing "we are all living here so we must have some impact," even as he wrote that he believed some climate changes were "naturally occurring."

He added, "if confirmed, I look forward to getting a better understanding of the dynamics."

And he wrote that he agreed with Perry "that the question is how we address it in a thoughtful way that doesn’t compromise economic growth, the affordability of energy, or American jobs."

In a February 2018 interview with the Washington Examiner, Brouillette accused the Obama administration of wanting "climate science to dictate their energy policy" and said the administration had "subordinated" energy research under a climate action plan.

"We want to do it exactly the other way around," Brouillette said. "We think we can produce energy here in America cleanly and efficiently and responsibly."

By November 2019, when Brouillette was quizzed at his Senate confirmation hearing to be secretary, he mentioned climate in his opening remarks, bragging that the United States is the second-largest generator of wind and solar energy in the world.

Yet he does not venture beyond the Republican argument that U.S. "energy dominance" and innovation can combat global warming.

As he hailed the flat emissions numbers in IEA’s report, Brouillette said DOE is "committed to developing world-class technology to help America meet its climate goals while at the same time increasing energy production and growing our economy."

Still, Brouillette has eschewed some of the attacks other Republicans have launched on the Green New Deal, a Democratic plan to address climate change. Perry called it a "fantasy" loaded with "cockamamie ideas that are coming out of left field." Trump has said the Democratic proposal to address climate change would "kill our cows" and threaten jobs (Greenwire, March 1, 2019).

Brouillette made a similar point on the economy in an October interview with the right-leaning Breitbart News Network but not without saying that the plan’s goals are "something we agree with."

He made it clear, though, he sided with Trump’s approach — innovation versus regulation.

The Green New Deal, he said, wants "to dictate to the American economy what types of jobs, what types of industries they want to see survive."

Brouillette is no renegade. His Twitter account features a stream of praise for his boss’s energy policy. He supported Trump’s decision to pull out of the Paris climate accord, which nearly 200 nations signed, pledging to cut greenhouse emissions.

"There is not a single signatory to that accord that has come close to the United States’ record on the environment," Brouillette told Breitbart.

Earlier this month, Brouillette offered accolades to Brazilian President Jair Bolsonaro, who has been criticized for pledging to open the Amazon rainforest to development. At the same time, Brouillette did so by hailing a fuel source that has divided environmentalists: nuclear power.

"We’ve demonstrated through the use of a very diverse energy policy that you can grow your economy and reduce carbon emission at the very same time," Brouillette said. "That is something that I think Brazil is interested in doing, as well."

‘A bit of hypocrisy’

Brouillette’s stance on climate could be clearer this year when policy decisions are made, such as how he will participate in international climate talks.

Trump’s 2021 budget request — much of which is likely to be ignored by Congress — calls for deep cuts to a variety of Department of Energy initiatives that backers say address climate change: Carbon capture and storage programs would be cut, along with DOE’s Office of Energy Efficiency and Renewable Energy, which develops some of the efficiency standards Trump complains about on the campaign trail.

One of Brouillette’s first moves in office was to finalize a decision to keep less energy-efficient lightbulbs on the market.

The Natural Resources Defense Council, which accuses the department of dragging its feet on energy efficiency standards, contends the decision could create the need to generate an additional 30 large power plants’ worth of electricity every year.

Brouillette trumpeted the decision with a Fox News appearance in December, insisting DOE would "stop the insanity" and "allow consumers to buy the lightbulbs they would like to buy rather than the ones Washington would like you to buy."

And he used his first public appearance as secretary to speak before the National Petroleum Council, chiding "certain bad actors" he accused of thwarting access to fossil fuels by opposing oil and gas pipelines.

"It’s a bit of hypocrisy on the part of some to suggest that they have concerns about the climate yet deny access to a very clean source like natural gas," he said.