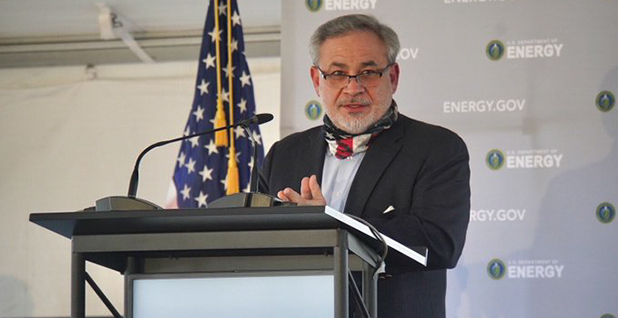 The positive cases follow the visit of Brouillette and other DOE officials to the Oak Ridge National Laboratory in Tennessee on Tuesday where members of Republican Gov. Bill Lee’s security detail subsequently tested positive for the disease.

"Although Secretary Brouillette tested negative and is not exhibiting symptoms, out of an abundance of caution, the Secretary and traveling staff will be returning by vehicle to Washington and following CDC guidance," she added.

CDC guidelines call for the quarantining of an individual exposed to the virus for 14 days after exposure.

The timeline is sure to upend a loaded travel schedule for Brouillette, who has spent the better part of the last two months visiting swing states in the upcoming election. He was set to visit Ohio today to participate in roundtables about the future of the energy industry in the region.

Brouillette spent most of yesterday in Pennsylvania, where he visited Johnstown and Erie to discuss how the western part of the state is helping meet energy supply chain problems facing the country.

The Energy secretary was in Tennessee on Tuesday for an event celebrating a cleanup milestone at the legacy Cold War weapons site as well as an announcement for $160 million in demonstration grants for two companies looking to build advanced nuclear reactors through a cost-sharing program.

In addition to Brouillette and Lee, Sen. Lamar Alexander (R-Tenn.) and Rep. Chuck Fleischmann (R-Tenn.) were in attendance. Representatives for those lawmakers said they had not come into contract with the security personnel affected by the virus and maintained social distancing during the event.

Pictures from the event, held under a large tent, show Brouillette, Lee and other speakers wearing masks. The audience also appeared to be sitting in chairs spaced apart (Greenwire, Oct. 15)