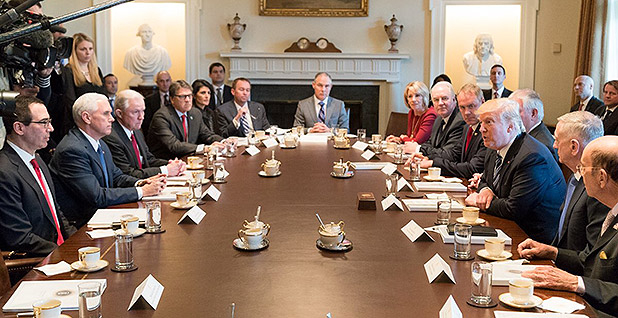 President Trump meeting with members of his Cabinet last week. Many of them tried to influence White House spending plans for their agencies. Photo courtesy of @POTUS via Twitter.

The leaders of energy and environmental agencies are quickly learning the limits of their power.

Despite publicly vowing to fight proposed budget cuts and to defend certain programs, the heads of U.S. EPA and the Interior and Energy departments lost their battles with the White House.

EPA Administrator Scott Pruitt pushed back against some reductions, only to see the agency’s cuts grow even deeper.

Energy Secretary Rick Perry testified that he was a "big believer" in research — while the budget says that is private-sector work — and praised a key innovation agency and DOE’s Loan Guarantee Program, both of which were zeroed out in the budget outline.

The secretaries’ apparent lack of influence in the Trump administration is unusual, according to top former agency officials.

Ex-EPA chief Gina McCarthy told reporters on Friday that she had "never heard of" an agency’s budget coming in even lower than the White House’s initial proposal before agency feedback.

Several former EPA officials said the agency’s $5.7 billion budget request for fiscal 2018 is a sign that Administrator Scott Pruitt doesn’t have much juice in the White House. Pruitt had been seeking a $7 billion budget, according to The New York Times. The 31 percent loss from current funding levels is the largest proposed cut for any Cabinet-level agency.

"My experience is, when an EPA administrator goes over to [the Office of Management and Budget] to fight for a program, they get paid attention to and taken very seriously," said Stan Meiburg, who worked at the agency for almost four decades, rising to the No. 2 position in the Obama era. "You have to question whether the administrator has any sway in the administration."

He added that "usually, the OMB passback is the floor, and then the agency appeals that and the budget is raised."

Robert Sussman and Karl Brooks, former top EPA officials during the Clinton and Obama administrations, both likewise said the budget proposal shows Pruitt’s lack of influence with the White House.

As details of the initial plan began to leak, agency officials told worried employees that Pruitt would be a champion for EPA.

"I have been assured that Administrator Pruitt will be working hard on our behalf to effectively represent us in the budget deliberations," Donna Vizian, who is now leading EPA’s Office of Administration and Resources Management, said in a memorandum earlier this month (E&E News PM, March 3).

But while EPA was set to lose 3,000 workers under OMB’s passback, now the agency could lose 3,200 jobs if Congress follows Trump’s blueprint.

Pruitt went to meetings at the White House to make EPA’s case, saying publicly that he was defending certain programs dealing with brownfields, water infrastructure and Superfund sites (Greenwire, March 2).

The administrator’s effort to persuade OMB seems to have been largely unsuccessful, although the funding did rise for some of EPA’s water programs. Pruitt said in a tweet on Friday that the president’s budget has some programs "funded to build water infrastructure." But the Superfund program would receive a $330 million cut under Trump’s budget plan.

"The cut to Superfund is just astonishing," Meiburg said, adding that the budget’s language about reining in the program’s administrative costs is "just happy talk."

During his Senate confirmation hearing in January, Pruitt also said he was committed to agency grants that help with cleaning up the Chesapeake Bay. But funding for that effort was eliminated in the president’s proposal.

Zinke suffered a similar defeat when the budget was released.

Earlier this month, Zinke told Interior employees he was "not happy" about the White House’s passback, which called for a 10 percent cut. "But we’re going to fight about it, and I think I’m going to win at the end of the day," he said.

The president’s request, however, called for Interior’s budget to be slashed by 12 percent, or $1.5 billion (Greenwire, March 16).

The White House’s brief budget outline may undermine some of Zinke’s favorite programs and top priorities.

The secretary is a strong supporter of the Land and Water Conservation Fund, a popular land buying program that was one of the few Interior areas that the White House targeted for a specific cut.

"The Budget reduces land acquisition funding by more than $120 million from the 2017 annualized [continuing resolution] level," the White House said. That means LWCF would be left with just $330 million — far below the $900 million it is authorized to received annually.

All of those areas were hit by the budget.

While the White House said it would increase investment in deferred maintenance projects, it would do so in part by cutting funding for other NPS maintenance programs. That budget gimmick, former agency officials said, would do little to reduce the overall problem, since cutting routine maintenance would result in new projects being added to the backlog.

The president also seemed to call for less money to be spent on Indian Country. Federal dollars would be focused "on core funding and services." But support for "recent demonstration projects" and targeted initiatives would be reduced, the request said.

The proposal also may have hurt the morale of Interior employees, who were promised a budget win by the secretary, observers said.

"Maybe if he’d held the line at 10 percent, he could have said, ‘Hey, you know, I tried,’" said Don Barry, the assistant Interior secretary for fish and wildlife and parks during the Clinton administration. "But the fact that they came in bigger looks really embarrassing. Morale is going to really sag, because you want to feel like you’ve got somebody who has traction and clout."

Interior employees, he predicted, "are going to feel really under siege and going to feel like their core missions, in fact, are not going to be covered."

Barry, who is now retired, was sympathetic to Zinke’s plight, saying he struggled to oversee the budgets of two of Interior’s 10 bureaus.

Nevertheless, Barry said, the proposal will make it harder for Zinke to accomplish the goals he has set out for himself: "Budget drives policy."

But Interior spokeswoman Megan Bloomgren noted that the budget blueprint isn’t the final word from the White House on the department’s funding, with details set for release later this spring.

The end result "will maintain [the Department of the Interior’s] core functions of land access and protection and save taxpayers $1.5 billion during tight fiscal times," she said in a statement.

The policy priorities Energy Secretary Rick Perry supported in his confirmation hearing could also be decimated by Trump.

Perry told senators he was a "big believer" in both basic research and applied energy research — a stark contrast with the overall theme of the president’s budget plan, which calls on the private sector to fund later-stage research.

He specifically praised the Advanced Research Projects Agency-Energy and the Loan Guarantee Program. Both were zeroed out in the Department of Energy’s $28 billion request, which represented a 5.6 percent cut from its current budget (Energywire, March 16).

But observers wouldn’t have known that from reading Perry’s Twitter feed. After the budget was released, the Energy secretary praised the outline, with no mention of specific programs he once championed.

After the release of the budget plan, Perry said he looked forward to working with Congress "to ensure DOE is run efficiently and effectively, as we accomplish our mission driven goals." DOE declined to comment further on the contrast between Perry’s stated beliefs and those expressed in the budget. But they suggest to former officials that the White House didn’t take much input from the Energy secretary.

"It shows there’s a very ideological aspect of OMB that is really making the decisions of what’s in and what’s out," said Jeff Navin, co-founder and partner at Boundary Stone Partners and a deputy chief of staff at DOE during the Obama administration.

The contrast also raises the question of whether Perry’s late confirmation gave him less influence over the budget than other Cabinet secretaries. Like Zinke, he was sworn in just two weeks before the spending blueprint was released.

But Navin said administration officials could have communicated with Perry if they wanted to ahead of time, as it was expected he would be confirmed.

The fact that his confirmation remarks were so different from those of budget officials signals that there was little agreement about the energy views of the administration, according to Navin.

"Because the president himself doesn’t have a strong governing philosophy, it’s going to be left to the individuals," Navin said. "Here you have [OMB Director Mick] Mulvaney versus Perry, and Mulvaney won."