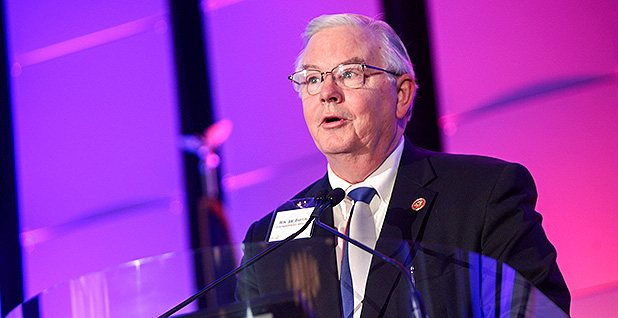 The Trump administration’s fiscal 2018 budget request is reviving the long-simmering debate over the Department of Energy’s loan guarantee program, which continues to enjoy bipartisan support but nonetheless faces tough headwinds in the current political environment.

The program was conceived by a Republican-led Congress and signed into law by President George W. Bush as part of the Energy Policy Act of 2005.

It has survived the intervening years despite being a political football throughout the Obama administration after California solar panel manufacturer Solyndra — recipient of a $535 million loan guarantee — went bankrupt in 2011.

But lawmakers, including senior Republicans, are hesitant to follow the president. Many would rather reform the system than undo it.

That position echoes long-standing critics, such as the Heritage Foundation, which earlier this month said Energy Secretary Rick Perry "should embrace the lesson of history: innovation in the market is better served by free enterprise."

Perry himself repeatedly avoided taking a firm position on loan guarantees when answering written questions from members of the Senate Energy and Natural Resources Committee.

Pressed by ranking member Maria Cantwell (D-Wash.) to reconcile his criticism of the loan program and the Solyndra episode during his presidential run with his creation as Texas governor of a "similar fund" to invest in new technologies, Perry said he was "proud of my record in Texas supporting emerging technologies."

He wrote, "If confirmed, I commit to reviewing the loan guarantee program and evaluate its successes and failures. I am committed to both investing in energy innovation and using taxpayer dollars responsibly."

In response to a question by Sen. Joe Manchin (D-W.Va.), Perry also declined to commit to using the loan program to support clean coal technology.

"While I understand that the department has played a role in applied research and made loans available to clean coal technologies, I have not been fully briefed on these programs or the project that they have supported," he wrote.

Perry reiterated plans to "work very hard to ensure that the American taxpayers get a fair return on our investments in new technologies."

Support for loan guarantees appears solid in the Senate, which last April voted 85-12 for a broad energy legislative package that included reforms to the loan program to require borrowers to pay at least 25 percent of the associated credit subsidy costs.

The bill, which died in conference talks with the House in December, also would have clarified the eligibility terms for loan applicants to allow states to participate in the program.

Senate Energy and Natural Resources Chairwoman Lisa Murkowski (R-Alaska), who is angling to revive last year’s energy bill, this week said she continues to favor reforms to the loan program rather than outright elimination. Cantwell has also signaled plans to fight any efforts to kill it (E&E Daily, March 22).

"The president is perfectly entitled to make his suggestion in the budget, but we’re going to write the budget," Sen. Lamar Alexander (R-Tenn.), chairman of the Senate Energy and Water Development Appropriations Subcommittee, said in a brief interview yesterday. "We’re not going to use that budget."

Sen. Debbie Stabenow (D-Mich.), a member of the ENR Committee, this week noted that the ATVM program is already slated to be phased out under an agreement she helped strike last year to help the city of Flint, Mich., recover from drinking water problems.

Still, Stabenow said she would work to ensure the budget proposal doesn’t affect any existing loans. "They need to understand that this is about creating good-paying American jobs," she said.

In the House, Republicans have a range of opinions about the program.

"It is unfair to ask American taxpayers to subsidize risky loans," Smith said at the outset, saying DOE should prioritize "basic and early-stage research that cannot be accomplished by the private sector."

House GOP appropriators have a different view on the program, which Energy and Water Development Subcommittee Chairman Mike Simpson (R-Idaho) has supported in the past.

"Frankly, loan guarantees are smart public policy in that they leverage private-sector dollars for public good in a much more robust manner than simple expenditures," he said.

"You always have to look at them as to whether or not they’re meeting the criteria of the public good, the public policy outcome that you stated in law, but loan guarantees are generally an innovative way to leverage public capital toward the public goals that you have."

Rep. Joe Barton (R-Texas), the former Energy and Commerce chairman who shepherded the 2005 energy bill into law, said last week he was divided over the loan program he helped create.

"I could go either way on that," Barton said in an interview. "There’s good loans, and there’s bad loans. Solyndra was obviously a bad loan. I think the loan for the nuclear plant in Georgia is a good loan. But if you have to save money, that might be a place to do it."

At the time of its creation, the loan guarantee program was intended to spur alternative energy sources and new nuclear power.

"Conceptually it made sense," Barton said. "The way it was implemented was an abuse of the intent, in my opinion. Obama abused it. Solyndra is the biggest, classic case, but there were others."

Barton, as the current Energy and Commerce vice chairman, is conducting a top-to-bottom review of DOE, with an eye toward writing reauthorization legislation later this year.

The loan guarantee program will likely be part of that review, he said, although he added that he had not spoken with Perry about it, nor Chairman Greg Walden (R-Ore.).

Barton called it "fair to say" there may be less need for federally backed energy loans than there were in 2005.

"We’ve got a big budget deficit, and our energy sector is generally very healthy," he said. "Obviously there’s problems in the nuclear industry and coal industry, prices are low, or at least not where they’d like them to be in the oil and gas sector, but it’s a very vibrant sector now. So our energy situation in the United States is very good."