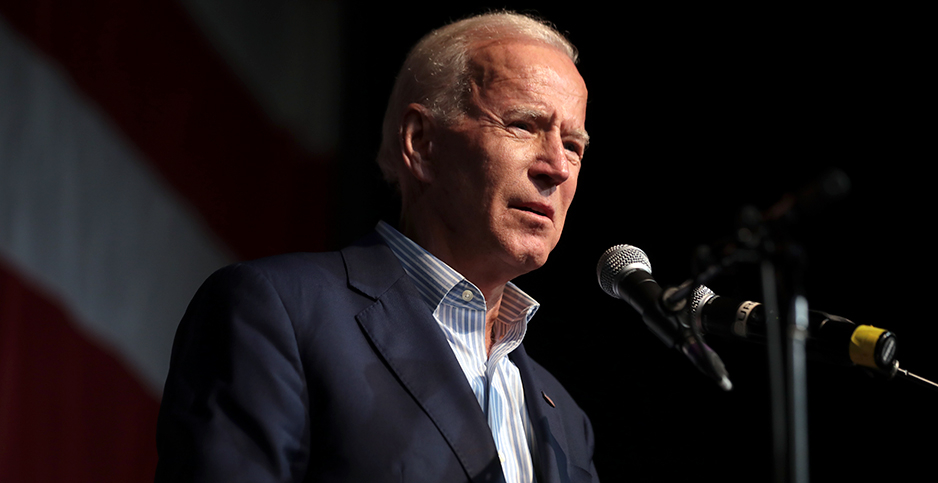 Joe Biden's (above) bid for president could get a lift from Texans who support clean energy, according to former Rep. Beto O'Rourke (D-Texas). Gage Skidmore/Flickr

Joe Biden has started hammering a message of economic populism that’s heavy on clean energy promises as he challenges a president who champions fossil fuels.

The presumptive Democratic nominee for president last week unveiled his "Build Back Better" plan to rejuvenate the U.S. industrial sector.

It calls for the federal government to spend $400 billion over four years to purchase American-manufactured products, including clean energy technology, electric vehicles and materials for climate-resilient infrastructure. It also outlines $300 billion in research funding, with a major focus on decarbonization.

The former vice president’s joint emphasis on "buy American" and climate action caught the attention of President Trump, who made domestic manufacturing a key theme in the 2016 race. Trump on Friday accused Biden of plagiarizing from his 2016 plan, even as he blasted Biden’s proposal as too radical. He didn’t provide evidence of plagiarism.

At stake are Rust Belt swing states that four years ago delivered Trump his electoral college victory, like Pennsylvania and Michigan. But also in play are some newly competitive states where renewable energy has been ascendant, like Iowa and Texas.

The Lone Star State might emerge as a key proving ground for Biden’s economic pitch.

The Texas oil patch was already having a record poor year with its first-ever negative barrel price. Now, the state’s spike in coronavirus cases threatens to spread economic damage to other parts of the economy; bars have been closed, and hospitals are prohibited from conducting elective surgeries.

"Texas leads the country in the generation of wind energy, and that didn’t just happen by accident," he said in a call with reporters, describing the state government’s investments in transmission lines and other renewable energy infrastructure.

"We have this choice before us. Do we want to develop them here in America, and all of the jobs and return on investment falling back on this country? Or do we want to let China or some other country take the lead on that?" O’Rourke said.

"And the vice president has squarely chosen America, Americans and American workers," he said.

The Trump campaign fired back that Biden had eight years as vice president to formulate an industrial plan, but he didn’t. Samantha Cotten, a Trump campaign spokesperson, said Biden’s new plan would be especially damaging to the Texas economy.

Trump, speaking to reporters Friday outside the White House, noted the resemblance to his own campaign pitch.

"It’s a plan that is very radical left, but he said the right things, because he’s copying what I’ve done," Trump said of Biden.

"But the difference is, he can’t do it, and he knows he’s not doing that," Trump said. "It can’t be the same, because he’s raising taxes way too much. He’s raising everybody’s taxes. He’s also putting tremendous amounts of regulations back on."

Biden’s plan calls for undoing "some" of Trump’s corporate tax cuts and imposing new taxes on "the wealthiest Americans," though details are lacking.

Trump signed a "Buy American" executive order in 2017 that aimed to cut waivers for federal agencies purchasing foreign goods, with an emphasis on steel. It also sought to tighten work visas.

Trump’s standing in Texas has eroded enough that he’s averaging about 2.5 percentage points ahead of Biden in state polls, according to RealClearPolitics. He carried the state by 9 points in 2016.

Biden hasn’t yet devoted serious resources to winning Texas. But Democrats are nevertheless organizing registration drives and making 15 million phone calls to Texas voters, with the goal of creating a massive data operation that could anchor a more serious effort to contest the state.

"So if come August, come October, the Biden campaign sees that Texas is competitive and wants to go all the way in, defeating Donald Trump here and becoming the first Democratic nominee since 1976 to win the 38 Electoral College votes — this is plug and play," O’Rourke said.