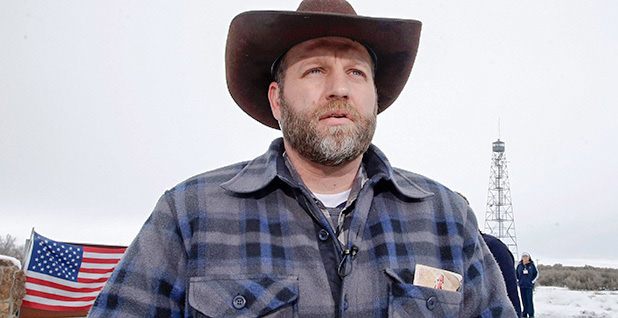 The ongoing trial of Ammon Bundy, above, and his supporters is pivotal to the government’s efforts to fight an extreme anti-public lands movement in the West. Photo courtesy of AP Images.

The trial of leaders of the armed standoff at Malheur National Wildlife Refuge represents a make-or-break moment in the government’s efforts to quash a radical anti-public-lands movement in the West.

If the government fails to secure convictions for the seven defendants in the Portland, Ore., proceedings that began last week, it could embolden their followers to stage more protests of federal land management policies.

"It is extremely important that our justice system come through and convict these guys," said former Interior Deputy Secretary David Hayes.

Hayes added that the trial needs to send a "message" to defendant Ammon Bundy, the leader of the 41-day armed standoff, and his supporters.

"If there are no consequences to a physical takeover of public lands, this is what they want," said Hayes, who is now a law professor at Stanford University. "They want to whip up a sense of entitlement to take actions that are clearly illegal."

Observers added that the trial is also an opportunity for the government to make up for what many characterized as a failed response to the 2014 standoff at the Bundys’ ranch in Bunkerville, Nev.

There, Bundy’s father, Cliven, led an armed rebellion against Bureau of Land Management officials over a roundup of cattle due to $1.1 million in unpaid grazing fees. Out of concerns for safety, federal officials ultimately backed down, though Cliven Bundy and his sons face separate trials on charges stemming from that event.

The high-profile nature of the current case may explain why federal prosecutors opted to charge the defendants with conspiracy — a charge that veteran attorneys say is typically easier to prove in front of a jury.

Specifically, the government charged 26 occupiers with conspiracy to impede federal officials through threats, intimidation or force during the standoff that ended Feb. 11. The current trial is for seven defendants, five of whom also face charges of possession of a firearm on federal property.

Conspiracy is a felony, and, if convicted, the defendants will likely face several years in prison.

However, the government likely could have filed more significant charges, including trespassing or domestic terrorism. It also did not file significant destruction of government property charges, even though officials have said the occupation has cost taxpayers some $9 million.

Vermont Law School professor Pat Parenteau said prosecutors have discretion over what charges are filed. In this case, the U.S. attorney’s office likely didn’t want to "overcharge," meaning file charges on which it would be difficult to persuade a jury to convict. If anything, prosecutors likely wanted to "undercharge," he said.

"An acquittal," Parenteau said, "would be a disaster."

Conspiracy has long been a favorite among prosecutors.

In 1925, federal Judge Learned Hand famously called conspiracy the "darling of the modern prosecutor’s nursery" because of its advantages.

To prove conspiracy, the bar is relatively low, said Tung Yin of Lewis & Clark Law School, who has been following the case.

Prosecutors need only show that there was agreement to commit an unlawful act and that there was some sort of overt act toward furthering the conspiracy.

"What makes it powerful is that the government doesn’t have to prove that these guys actually impeded government employees," Yin said, "only that they agreed to do so."

And the agreement doesn’t need to be formalized or in writing. That is what makes the reams of Facebook data taken from the defendants’ accounts so important to the prosecution’s case, Yin said.

Last week, the government spent days introducing posts from those accounts in which the defendants instructed followers to come to the refuge and to bring their guns.

Kevin Sali, a Portland-based criminal defense attorney, said the conspiracy charge allowed the prosecution to cast a wide net in charging many of the occupiers.

"It is easier to prove," Sali said. "Once you prove that people agreed to do something unlawful, that’s it."

That may explain why 11 of the 26 people charged pleaded guilty to the charge, including Ryan Payne, another leader of the standoff. (Several others asked to have their trial delayed; they are due in court in February.)

Michael Blumm, another law professor at Lewis & Clark, said prosecutors may also be motivated by another factor: that Ammon Bundy, his brother Ryan and the other defendants refused to plead guilty.

U.S. attorneys, he said, dislike expending resources on cases where there is overwhelming evidence of the defendants’ guilt, as there is here due to the voluminous Facebook data and media coverage of the standoff.

The defendants, he said, could have faced reduced prison time if they had pleaded guilty. Because they didn’t, prosecutors will likely seek maximum sentences in the trial that is expected to last two to three months.

Instead, Blumm said, it appears the Bundys are looking to advance their protest over federal land ownership via the trial — even though federal District Judge Anna Brown repeatedly admonished lawyers last week for bringing up the subject because it is not relevant to the charges.

Blumm added that there simply is no legal basis for the Bundys’ constitutional argument over federal land ownership (Greenwire, Jan. 20).