Bundy: ‘I’m not trying to foster a rebellion,’ yet 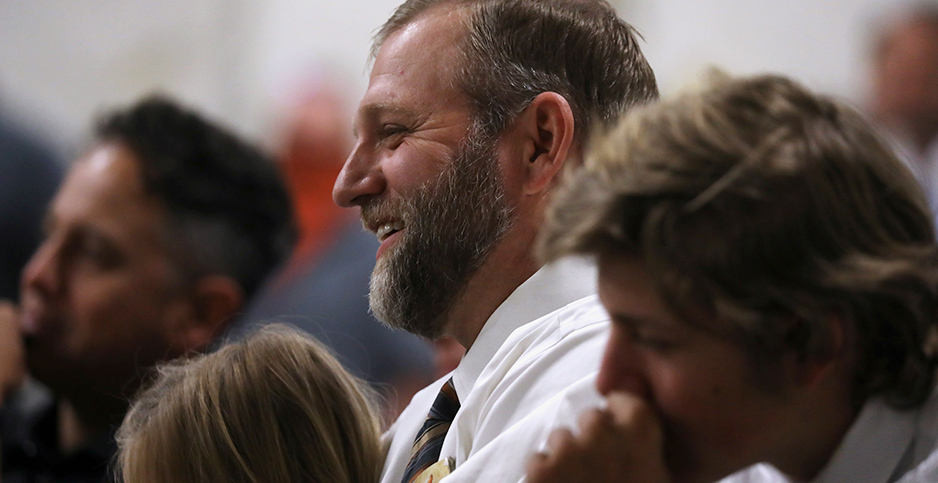 Ammon Bundy is on a mission to spread to others what a variety of militia members and self-avowed patriots did for his family’s Bunkerville, Nev., ranch: Join together, make a show of force and chase off unwanted government intrusion.

During a barnstorming tour of Utah fairgrounds, hotel conference rooms and event centers this month, Bundy has been promoting his People’s Rights network — relying heavily on the narrative of his family’s past tangles with federal land managers to argue its necessity to would-be members.

"That’s what I’m selling. I’m selling the ability for you to be able to call upon your neighbor when you need. I’m selling the ability for you to unite and to come together with your neighbor and get to know them for when times come when you will need them," Bundy said at his first stop in Logan, Utah, last week. "Because I hate to say it — but I said it a lot — we are not going to find [a] remedy to the security of our liberties in Washington, D.C."

Born out of opposition to government stay-at-home orders, mask mandates and other public health efforts to stem the spread of the COVID-19 pandemic — which has killed more than 500,000 Americans to date — Bundy vowed last year to create a "den of rattlesnakes" from like-minded anti-government activists (Greenwire, April 10, 2020)

Nearly a year later, Bundy told a crowd in Ephraim, Utah, that the network — which relies on a telephone-tree system with an amateur radio safety net — counts as members nearly 52,000 individuals in 37 states.

"And we’re growing," he added. A few days earlier, Bundy listed the count at 36 states.

Bundy is making his People’s Rights tour just days before a state court trial on misdemeanor trespassing charges in Idaho. He was arrested at the state Capitol building last August during protests about state coronavirus restrictions.

During his at-times meandering speeches — which often last more than an hour and sometimes two, typically before tightly packed groups devoid of face masks — Bundy talks extensively about his family’s 2014 standoff with federal agents.

"That drove me to do what I’m doing now," Bundy said in Tremonton, Utah, in one of several videos of his appearances posted to Facebook and reviewed by E&E News. "My family’s ranch was put under siege and our lives were threatened by federal agents, and our crime, I guess, was just doing what our family has done for 140 years, which is ranching in the southern Nevada desert."

In an incident that propelled the Bundy family into the national spotlight, Nevada rancher Cliven Bundy and his sons, including Ammon, rallied supporters to the family’s ranch in Bunkerville to stop the Bureau of Land Management from seizing cattle.

The agency had sought to round up the animals for auction to settle decades of unpaid grazing fees and trespass fines stemming from Cliven Bundy’s failed court challenges — in which he argued without success that the federal government cannot own land in Nevada or elsewhere. At the time, he owed more than $1 million.

In his recollection of events, Ammon Bundy often asserts federal agents threatened to make his family "another Waco or Ruby Ridge," referring to two infamous incidents from the early 1990s that prompted the growth of militia groups nationwide.

"How am I here?" Bundy asked the audience in Logan during his first appearance last week. An unidentified man in the audience replied: "Because your neighbors showed up."

"My family would have been dead. It is most certain they would have taken our lives if the people did not respond," Bundy continued. "And that is the pattern we must follow in order to maintain our liberties. That is the same pattern that People’s Rights is based upon."

Despite facing trial for his roles in both the Bunkerville standoff and the 41-day occupation of the Malheur National Wildlife Refuge in Oregon in 2016, Bundy touts that he has never been convicted in a crime (Greenwire, Oct. 28, 2016).

Notably, an E&E News review of more than 12 hours of video of Ammon Bundy’s recent appearances found no mention of concerns that the Biden administration could organize a new effort to address Cliven Bundy’s continued use of federal lands without a grazing permit (E&E Daily, Sept. 17, 2020).

Earlier this year, Cliven Bundy vowed to "walk towards guns" if the federal government attempts to curtail his use of public lands (Greenwire, Jan. 15).

During his appearance in Tremonton last week, Ammon Bundy told the audience that the January riot at the U.S. Capitol — as supporters of former President Trump sought to overturn the 2020 election results — "really caused growth" for his organization.

But he rejected audience questions about whether People’s Rights is directly tied to militia groups or is seeking to overthrow the federal government.

"I can’t say that we are," Bundy said when asked whether he was coordinating with armed groups, but went on to describe how to form "small organized units of neighbors in defense," or SOUND teams, which he described as autonomous marshals or militias.

"They are their own structure, their own people," Bundy explained. "This could be a militia that is already organized, or you can create your own SOUND teams."

At his appearance in Logan a few days earlier, Bundy asserted his organization is relying solely on a defense posture for the time being.

"It is a good thing when the government is afraid of the people," Bundy said, and later added: "I don’t think it’s time. I don’t think the people are united enough to make things right. I think if we tried right now, that we would just cause a lot of bloodshed."

He continued: "If we’re united enough, we can come together enough that maybe we can create another system that will actually administer justice. Then maybe we can make some of these things right. But that’s another step, that’s another level. Right now, we have to stick together."

In several of his appearances, however, Bundy raised, unprompted, his thoughts on whether he could kill another individual.

"We must go through all the steps that we can to peacefully resolve the violation that is upon our neighbor or upon ourselves," Bundy said in Ephraim, Utah, on Monday. "I don’t even know that I could take another person’s life in my own defense. I actually don’t think that I can. But I’ll tell you what I can do, I can take another person’s life in defense of my little children’s life … in defense of my wife and my neighbor."

Much of the focus at Bundy’s appearances, including commentary from audience members, however, remains focused on the government’s response to the novel coronavirus pandemic.

He emphasizes his organization’s involvement in two incidents — including a protest at a Vancouver, Wash.-area hospital in late January over an elderly women who was held in quarantine after refusing a COVID-19 test — to show its capabilities.

Local media reports noted the Washington hospital was briefly placed on lockdown during the incident.

In a talk last night in St. George, Utah — accompanied by his brother Ryan Bundy — Ammon Bundy also repeated conspiracy theories about a dearth of scientific findings on the COVID-19 virus.

"They still have not isolated the COVID virus," Bundy incorrectly asserted.

During his speech Tuesday in Richfield, Utah — part of an event promoted as the "Preparedness Fest" — Bundy derided face masks as a "political agenda."

Bundy also addressed his upcoming jury trial in state court, where he could face up to a year in prison if convicted on two misdemeanor charges of trespassing and resisting or obstructing officers.

He was arrested at the Idaho Capitol on two consecutive days last August during protests against COVID-19 restrictions, and state officials subsequently banned him for one year from the Legislature building and grounds.

"I think the Lord will protect me, and I think I’ll be able to expose a whole bunch of corruption," Bundy asserted. A jury trial is set to begin Monday morning before Ada County Magistrate Judge David Manweiler (E&E News PM, Dec. 23, 2020).

Bundy, who refused a plea agreement that would have required 15 hours of public service and $315 in court fees, recounted his arrest with relish in remarks in St. George last night.

Recounting one incident, Bundy described how he went limp went arrested, prompting officers to place him in a rolling office chair to remove him from the building.

"They got a roller chair and put me in it and rolled me out," Bundy said, prompting loud laughter from the crowd at the Red Lion Hotel. "What did the media report? The media reported that I handcuffed myself to a roller chair. They’re like, ‘What an idiot.’ … If I’m going to handcuff myself to something, I’m not going to do it behind my back."

Bundy has also been critical of public health limitations that have required pretrial hearings to be held virtually.

"I talked to the judge, but I received due process through a camera and a microphone, that’s what we’ve been reduced to. The people, all of us, have been reduced," Bundy asserted.