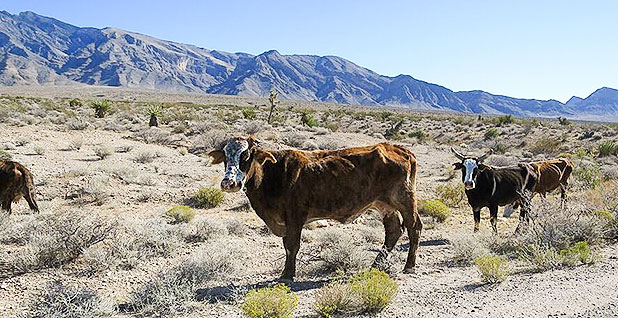 LAS VEGAS — Nevada rancher Cliven Bundy has spent the last 21 months in federal custody, but his cattle remain home on the range, grazing illegally on public lands the same way they have for more than 20 years.

And he continues making money off them. Records show Bundy has sold about 400 while behind bars.

It remains to be seen exactly when — or whether — Bureau of Land Management officials will make another attempt to round up those animals from the area known as the former Bunkerville allotment.

"No final decision has been made," BLM spokeswoman Megan Crandall said last week. She declined to provide any additional information.

The choice may turn on a number of factors, many of which are out of BLM’s control: A guilty verdict from jurors could prompt a new federal seizure or environmentalists may file a lawsuit alleging fraud.

Since Bundy refused to sign a new grazing agreement in 1993, federal officials have made only one organized attempt to remove his cattle from public lands.

That 2014 impoundment effort resulted in an armed standoff between more than 400 protesters and federal agents from BLM and other agencies, and ultimately led to the government’s indictment of Bundy, four of his sons and numerous supporters.

While Bundy and his sons Ammon and Ryan are currently on trial here in Las Vegas on a range of misdemeanor and felony charges — including conspiracy, threatening federal officials and firearms charges — the cattle continue to roam, trampling sensitive soils and consuming limited vegetation.

Observers suggest BLM’s apparent hesitance to attempt another roundup stems from a variety of factors, including the potential expense of corralling what government prosecutors have described in the trial as an unknown number of "feral cattle" as well as the fear of another clash with anti-government protesters.

"Impoundment is a very serious process. It’s something that we only do as a last resort … when nothing else is working," BLM official Mary Jo Rugwell testified last week. Rugwell was the agency’s Southern Nevada District Office manager from 2008 to 2011, when the agency opted to wrangle Bundy’s straying herd, which had spread as far south as the Lake Mead National Recreation Area (Greenwire, Nov. 16).

In an interview outside the courtroom last week, Cliven Bundy’s defense attorney, Bret Whipple, said his client is not concerned with a renewed impoundment effort.

"The priority is here and now, getting out of custody," Whipple said. Chief U.S. District Judge Gloria Navarro last week refused to release Cliven and Ammon Bundy but did permit Ryan Bundy to be transferred to a halfway house for the duration of the case (Greenwire, Nov. 14).

But Whipple also said the Bundys are waiting to see whether Trump moves to reduce the 297,000-acre boundaries of Gold Butte National Monument, which is located south of the Bundy ranch and contains a portion of the former Bunkerville allotment.

"We don’t know if it’s going to include the Bunkerville allotment," Whipple said. The move could allow new grazing, though a 1998 court order would still bar Bundy from using that allotment.

In a separate interview with the Las Vegas Sun earlier this month, Whipple said his client was also not focused on the more than $1 million in grazing fees and fines that he owes the government.

"It’s kind of, we’ll cross that bridge when the time comes," Whipple told the newspaper.

Much depends on the outcome of the trial.

Besides a roundup, there is a second option for declaring a seizure of Cliven Bundy’s cattle: forfeiture.

Attorney Todd Tucci, who is not involved in the trial, noted the indictment against Bundy and his co-defendants includes five counts of criminal asset forfeiture. That means guilty verdicts on certain charges could be used to force the Nevadan and the other defendants to turn over firearms and ammunition or could result in fines of at least $3 million that could include "any and all cattle on the Bunkerville allotment and Lake Mead National Recreational Area."

"If they get convictions of the last five indictments, then they will have all the authority they need to go out and take his cows and property," said Tucci, who is senior attorney at the Idaho-based law firm Advocates for the West.

According to the superseding indictment, Bundy could lose his cattle if he is found guilty of any of nine of the 16 charges against him — including conspiracy to commit an offense against the United States, threatening a federal law enforcement officer, obstruction of due administration of justice, interference with interstate commerce by extortion and interstate travel in aid of extortion.

Tucci acknowledged the Justice Department could opt not to pursue Bundy’s cattle, but he suggested it’s unlikely the agency would achieve a conviction and not take action.

"Is it possible that the feds can get a conviction on the indictment regarding criminal forfeiture and not go after his cows? It would be a shocking outcome to this case, and it would be inconsistent with the way the Department of Justice does business," Tucci said.

A roundup would not necessarily require BLM’s involvement, Tucci added, stating that DOJ officials could seek assistance from local or state law enforcement or other contractors.

"That’s why this is really interesting. Because this is no longer in BLM’s hands," he said.

Moreover, Tucci suggested if DOJ fails to secure convictions against Bundy or his sons and co-defendants, it could make it all but impossible for BLM to attempt to seize his cattle.

"Can you imagine the pushback that BLM will get if after Bundy gets a not guilty [verdict] that they then go try and impound his cows?" Tucci said.

During a hearing last week to determine whether Ammon Bundy could be released from federal custody with supervision, federal prosecutors asked him what he would do if BLM attempted another impoundment during the trial, which is expected to last up to four months.

"I would do as I did before and peacefully assemble," Bundy responded, indicating he would travel to the Bunkerville ranch, about 90 miles northeast of Las Vegas (Greenwire, Nov. 10).

The Bundys have argued that the standoff with federal officials was a form of First Amendment protest, citing the fact that no shots were fired during or before the April 12 clash.

But environmentalists said they will continue to push the federal government to curb Cliven Bundy’s illegal grazing practices, arguing the Nevada rancher is damaging a fragile ecosystem.

"It is incumbent on [Interior] Secretary [Ryan] Zinke to say, ‘These lands are worthy of protection, and I’m going to do my job and ensure these lands are protected from Cliven Bundy’s cows,’" said Center for Western Priorities spokesman Aaron Weiss.

He added: "From everything we’ve heard about the Bundy family’s ranching practices, it’s not something that would be recognized as ranching by most cattlemen. These are essentially feral cows."

During remarks in court last week, Whipple sought to downplay descriptions of the Bundy cattle as wild and aggressive, asserting the Nevada family has developed a breed over generations that is hearty, independent and strong. "They’re very resilient cattle," he said.

Center for Biological Diversity Executive Director Kierán Suckling said rather than continue to wait for the government to act — via another impoundment effort or a post-conviction asset seizure — his organization is contemplating a lawsuit against individual BLM employees.

"The cattle are still out there trashing our public lands. It’s truly horrible how long Cliven Bundy has been able to drag this out," Suckling said.

He added: "I’m not convinced that even if they put the Bundys in jail that they’ll get the cattle."

In its potential lawsuit, Suckling said CBD would accuse individual BLM employees of fraud, arguing they have been "aiding and abetting the trespass and theft of the public property" by refusing to take action against the Bundys.

Zinke has refused to discuss the Bundy cattle, including during a news conference he held in Bunkerville after a tour of the monument last summer. "I’m not going to address that issue," Zinke said when asked whether his agency planned to remove the cattle (Greenwire, July 31).

In the meantime, even from behind bars, Cliven Bundy has continued to sell his cattle.

According to branding records provided to E&E News by Nevada’s Department of Agriculture, Bundy sold more than 400 cattle between January 2016 and this month.

The branding records list the type of animal — bull, steer, cow or heifer — its age and whether it is marked, as well as the seller and receiver of the cattle. The Bundy brand is a capital V over the letter O.

In the last two years, Bundy has sold nearly 200 cattle via the Cedar Livestock auction in Cedar City, Utah.

Records show Bundy recorded the movement of 16 head, including one cow, to the Utah auction on Nov. 1. There is no indication of the weight of the animal.