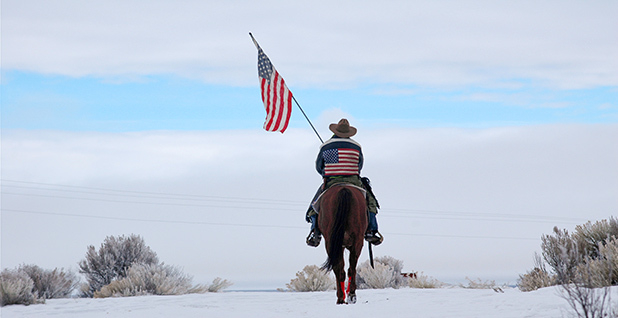 Duane Ehmer of Irrigon, Ore., rides his horse above the refuge headquarters at Malheur Lake. Photo by Phil Taylor.

BURNS, Ore. — Harney County Sheriff Dave Ward last night met briefly with Ammon Bundy, the ringleader of the armed occupation of the Malheur National Wildlife Refuge, to urge him and his friends to leave.

It was the first face-to-face meeting Bundy has had with law enforcement since he and a dozen or so followers commandeered the refuge’s unoccupied headquarters Saturday and established a makeshift camp.

Ward, accompanied by a couple other sheriffs, met Bundy about 20 miles east of the refuge compound at a remote intersection surrounded by snow-covered sagebrush near the shores of Malheur Lake.

The conversation, brief and without resolution, was a major step in what’s become a tense, weeklong standoff by militants seeking to free imprisoned ranchers and topple the federal government’s domain over Western lands.

"I think there are some positives that could come out of this, and I think the people of the county are excited about working out issues that come from the government overreaching," Ward said. "Before this thing turns into something negative, which would ruin all of that, I think we need to find a peaceful resolution to help you guys get out of here."

Ward warned that it "only takes one unstable person to show up" to threaten bloodshed.

But Bundy said he feels his group continues "getting ignored" and gave no indication that he plans to decamp.

"We pose no threat to the communities whatsoever at all," he said. "We mean no harm to anybody."

The two shook hands and went their separate ways.

Bundy later told reporters that Ward gave his followers "some things to think about."

"There’s something much bigger here that needs to be resolved," he said. "Until we know and understand that the people are going to end up on top here, we plan on staying."

Forcing the United States to begin to relinquish its 640-million-acre estate "could be a week … could be a year," he said.

That goal faces both legal and political hurdles that even many states’ rights advocates acknowledge are insurmountable. It also conflicts with the views of nearly 3 out of 4 Western voters, according to a 2014 poll commissioned by the Center for American Progress.

Bundy said a couple hundred people from the Burns area have visited him at the refuge. He claimed that his entourage is growing.

New arrivals included Jerry DeLemus, a former Marine from New Hampshire who last summer organized, but later called off, a "Draw Muhammad" contest, a free speech event that many Muslims would have found deeply offensive.

"They have a plan so things don’t go bad," DeLemus said. "I think they stand a good chance at success."

Duane Ehmer of Irrigon, Ore., yesterday morning rode his horse among the frost-crusted sagebrush at the base of the refuge’s wildfire lookout, carrying an American flag.

The Oregonian reported yesterday that police shut off power to a Bureau of Land Management fire station in Frenchglen about 40 miles south of the refuge compound to ensure militants do not expand their occupation.

The Harney County Joint Information Center, which is speaking for federal, state and county law enforcement agencies, confirmed that there’s been "a power outage near Frenchglen" but said "there aren’t any details that are appropriate to release at this time."

Some support, but criticism builds

While an overwhelming number of Harney residents on Wednesday said they want the occupiers to go home, a small number have supported them.

Joe Kingen, a rancher in Fields, Ore., who backs Bundy, brought his wife, son and daughter to the refuge yesterday. He said BLM and environmentalists have been "pecking away at the ranching community for years and years."

Kingen’s 11-year-old son, Monte, asked to interview a leader of the group for an article in his school paper, the Desert Rat, and was given a one-on-one with Ryan Bundy, Ammon’s brother.

"Are you moving here forever?" Monte asked, wearing a cowboy hat with a pencil and notebook in hand.

"Nope," Bundy said. "We’re just here to help establish some rights and help you guys out. Our family wants to help your family."

Yet organizations and politicians spanning the political spectrum have condemned the occupation.

On Tuesday, Oregon Gov. Kate Brown (D) and the American Lands Council, an anti-federal lands group run by conservative firebrand Ken Ivory, both weighed in against the refuge siege.

"What started as a peaceful and legal protest has become unlawful," Brown said in a statement yesterday. "Those individuals illegally occupying the Malheur Wildlife Refuge need to decamp immediately and be held accountable."

ALC blasted the incarceration of Harney ranchers Dwight and Steven Hammond as "grave injustices" but added that "the potentially dangerous standoff that is shaping up in Oregon is not likely to resolve conflicts caused by the federal government’s mismanagement of public lands."

Dwight and Steven Hammond were originally sentenced to three months and one year, respectively, in prison for their 2012 convictions of setting wildfires on federal lands that charred 140 acres. But the 9th U.S. Circuit Court of Appeals overturned that penalty and forced them to be resentenced to five years each, as federal law requires.

Ward on Wednesday night faced heavy pressure from his constituents to meet with Bundy to hasten the group’s departure. Ward reportedly offered Bundy a "safe escort out" so he and his followers could return to their families.

Aside from Ward, law enforcement authorities appear to have stayed far away from the 188,000-acre refuge.

It’s unclear how long this standoff could last. Law enforcement, led by the FBI, seem content to steer clear of the refuge and avoid the risk of bloodshed. The occupiers have not caused serious damage, and they do not appear to be threatening any members of the public.

On the other hand, the refuge is federally owned and is a valued asset to birdwatchers and hunters who provide an economic plug for the Burns economy. It’s unlikely that federal agents would allow the occupation to continue indefinitely.