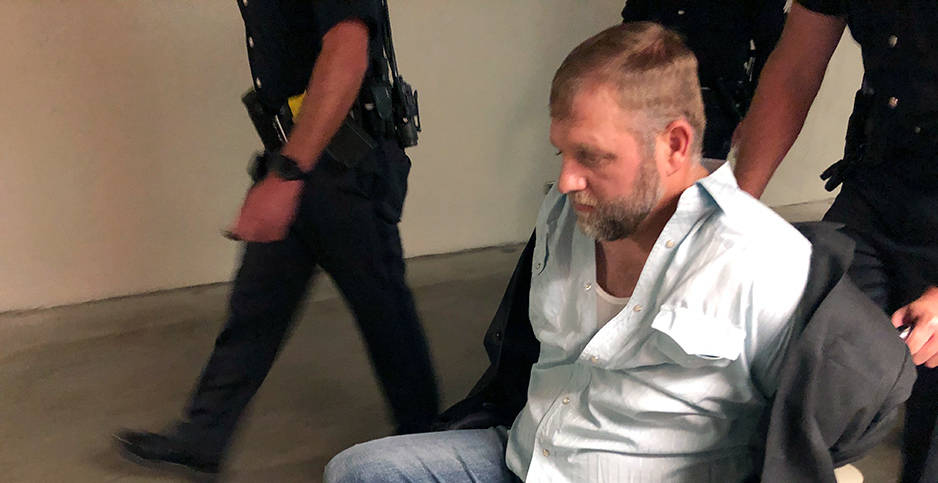 Anti-government activist Ammon Bundy failed to appear today in a state courthouse — where he was due to face trial on misdemeanor charges — after he was barred entrance from the building for refusing to don a face mask.

Bundy was set to appear in the Ada County Courthouse in Boise, Idaho, on charges stemming from his arrest last August at the state Capitol building. He took part in protests against state coronavirus restrictions like stay-at-home orders and the use of face masks.

But Ada County Magistrate Judge David Manweiler announced this morning that the trial would be delayed by at least one day after Bundy refused to wear a face mask — or use another option, like a plastic face shield — and had been refused access to the courthouse.

Although Idaho does not have a statewide mask mandate, the city of Boise does require face masks in an effort to stem the coronavirus pandemic.

"I intend on giving the court some more teeth with regard to enforcement of that requirement, as long as that is still the requirement to appear in person," Manweiler said in a brief livestream of the case, much of which lacked audio.

Manweiler added: "The court engaged parties early on in the case and sought to find alternatives."

Bundy unsuccessfully argued in pretrial hearings for his case that the trial should proceed without health precautions like face masks or social distancing, but Manweiler rejected those requests (E&E News PM, Dec. 23, 2020).

The judge also set a $10,000 bond for both Bundy and another man charged in the same incident, noting that the duo would be charged with "failure to appear" in court.

"In the future, if they fail to comply with the court’s mask requirement, should it still be in effect for the next in-person hearing, this court will have the right to hold them in custody," Manweiler said.

Once the trial does begin, Bundy will face fewer charges, as the judge tossed some at a prosecutor’s request.

Bundy had spent the previous two weeks on a barnstorming tour in Utah promoting his People’s Rights organization, which grew out of opposition to state and local public health efforts to curb the spread of the COVID-19 pandemic. The virus has killed more than 500,000 Americans to date (Greenwire, March 11).

The anti-government activist first rose to national prominence, along with his father Cliven Bundy, during a 2014 armed showdown with federal agents near Bunkerville, Nev. The incident was sparked when the Bureau of Land Management attempted to seize Cliven Bundy’s cattle over unpaid grazing fees and trespass fines amounting to more than $1 million.

Ammon Bundy, along with his brother Ryan Bundy, would later lead an occupation of the Malheur National Wildlife Refuge in Oregon in 2016.

Federal officials indicted Ammon Bundy over his role in both incidents, but he was acquitted in one case, and the other ended in a mistrial.

Although Bundy had been charged with two counts of both trespassing and resisting or obstructing officers — a combination that could have landed him up to a year in jail — Manweiler dismissed one set of charges in a pretrial hearing Thursday.

Idaho Deputy Prosecuting Attorney Whitney Welsh requested that the judge dismiss the charges after receiving "additional evidence" in the case. Welsh did not detail that evidence in court filings or during the pretrial hearing.

"The state does not wish to proceed any longer because elements of the crime from the state’s perspective were not able to be proved beyond a reasonable doubt after we had further discovery in investigating this case in preparation for trial," Welsh told the judge.

According to court documents Bundy filed Friday, the issue is tied to regulations over who can order that individuals be removed from the state’s Senate chamber.

In an interview with state prosecutors March 4, former Idaho Senate President Pro Tempore Brent Hill revealed that he had not ordered anyone to remove Bundy from the chamber.

But Bundy had been arrested and removed from the Senate on Aug. 26, when he was also issued a letter from state administrative officials barring him from the state Capitol building for one year (Greenwire, Aug. 27, 2020).

A jury will still consider charges from Bundy’s first arrest in the state Capitol on Aug. 25.

Bundy had earlier refused a plea agreement that would have diminished the charges against him to two counts of disturbing the peace, with prosecutors recommending 15 hours of public service and $315 in court fees. The agreement also included three days of jail time, but Bundy would receive credit for time served.