Bundy relies on battles with feds in bid for state office 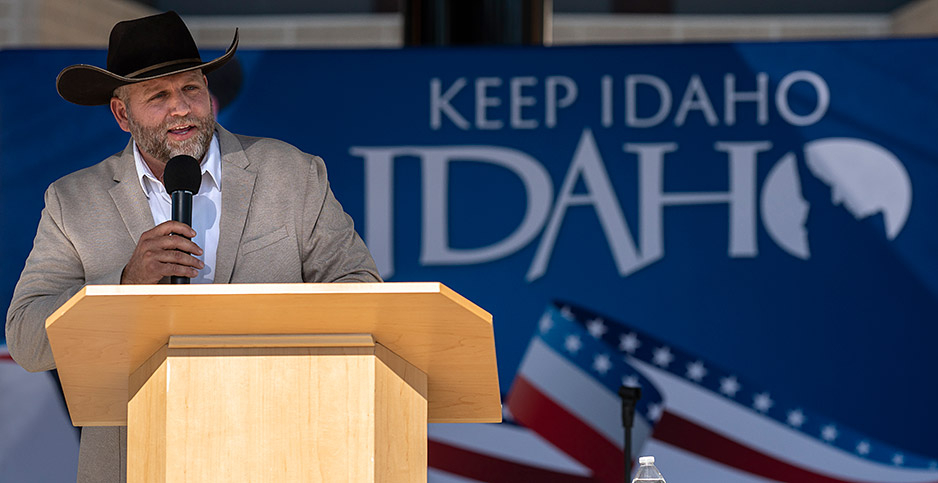 Ammon Bundy in June as he announced his candidacy for governor of Idaho. Nathan Howard/Getty Images

As he attempts to gain a foothold in Idaho’s gubernatorial race, political neophyte Ammon Bundy is leaning heavily into his personal mythos as an anti-government activist, and angling to convert his name recognition from battles with state and federal officials into votes at the ballot box.

But Bundy’s ability to convince voters to abandon traditional Republicans for his own quixotic candidacy — which includes pledges to ban all abortions, as well as seize control of all federal lands in the state — could be a long shot, even in solidly red Idaho.

"Sometimes an outsider candidate can get a lot of traction … but we still have time to go before we get there," explained Jaclyn Kettler, a political scientist at Boise State University. "In a crowded primary like this, it can be hard to know. There will be people who find that appealing, but how the broader electorate views him will be really interesting to watch."

Republican Gov. Brad Little — who won his first term in 2018 after narrowly clinching the GOP primary against then-Rep. Raúl Labrador and businessman Tommy Ahlquist — is expected to seek reelection. Although state records show he is fundraising, he has yet to announce his intentions.

In the meantime, challengers to Little have flooded the race, with state campaign finance records listing nine active campaigns. In addition to Bundy, Lt. Gov. Janice McGeachin and financial adviser Ed Humphreys are among the GOP candidates.

But Kettler said that despite the crowded field, Little’s political successes — such as cutting taxes and ending the year with a state budget surplus — are widely expected to make him the front-runner once he formally declares his candidacy.

"It seems like it would be a fairly easy reelection," Kettler said, but she noted that Little could face pushback about the state’s COVID-19 response from more conservative members of the GOP.

McGeachin made headlines in May when she took advantage of Little’s absence from the state to use her temporary authority to issue an executive order banning mask mandates in the state. Little reversed the order the following day.

Bundy has likewise made a name for himself in Idaho by opposing the state’s pandemic response, and used the state as a base for his People’s Rights organization, which advocates for people to organize to oppose what they see as government overreach.

But as he looks to take on experienced politicians, Bundy still relies heavily on two incidents that brought him national attention: the 2014 armed standoff with federal agents near his father’s Bunkerville, Nev., ranch, and the 2016 occupation of the Malheur National Wildlife Refuge in Oregon that was sparked by the incarceration of father-and-son ranchers Dwight and Steven Hammond on arson charges.

In a 3-minute campaign video released Sunday, Bundy included footage of the 2014 incident.

"It is an unfair fight when the federal government unlawfully attacks the people," says Bundy, dressed in a blazer and cowboy hat before an American flag background.

As the video shows images of protesters on horseback and federal agents backing up in front of a crowd, Bundy continues: "Thankfully, like-minded patriots across the country stood with us as we fought back against federal tyranny to protect our land and our rights."

Bundy did not respond to an interview request from E&E News, but in recent appearances on local television or conservative YouTube channels or podcasts, he is typically quick to raise both the Nevada and Oregon incidents.

Bundy spent nearly two years jailed before trials in both the Oregon incident and the Nevada standoff. But he was not convicted in either case.

A federal jury in Oregon acquitted Bundy and his co-defendants, including his brother Ryan Bundy, in late 2016 for their roles in the Malheur occupation.

A subsequent trial in Nevada over the 2014 incident ended in a mistrial after a federal judge found prosecutors had withheld evidence from the defense. An appeals court refused to grant the government a new trial in that case last year (Greenwire, Aug. 6, 2020).

Bundy’s only criminal conviction to date came in connection with his protests over Idaho’s handling of pandemic restrictions. A state jury last month found Bundy guilty of trespassing at the state’s Capitol building last summer and then resisting arrest.

Bundy then asked a state judge to throw out that verdict and acquit him on the misdemeanor charges, but the judge refused to do so. Bundy faces another trial on similar charges for his April arrest at the state Capitol, when he violated a one-year ban from the building (Greenwire, Aug. 9).

Still, Bundy has seized on his time locked up awaiting trial to frame himself as a reluctant candidate, asserting he was inspired to seek office during one of his repeated stints in solitary confinement.

He told the conservative website Idaho Dispatch about that decision in June.

"To think that I am just a troublemaker is what the corporate media want you to think," he said.

He likewise told Boise-based ABC affiliate Idaho News 6 last month that: "I don’t want to run for governor. I am running for governor, but it’s not out of a want."

Nearly nine months ahead of the GOP primary — which is expected to be set for May 2022 but has yet to be officially scheduled — no public polls have been conducted on the race.

But political scientist Matthew Miles told E&E News that he would expect Bundy to draw support from the state’s northern end, noting that its conservative politics compare to areas like rural Oregon or rural Washington state.

"That crowd that was supportive of Ammon Bundy with what he did in Oregon, there’ s a chunk of them in Idaho," said Miles, who is a professor at Brigham Young University-Idaho but clarified that his opinions do not represent the school.

"They really like the ‘us versus the government’ kind of thing," he said.

While Bundy has become a vocal opponent of pandemic restrictions in the state, Miles suggested that his focus on both the Nevada and Oregon incidents could offer a "more clear-cut" choice to some voters when selecting among conservative candidates.

"Some of those people are anti-government but maybe want to get vaccinated," Miles said. Bundy stated in his interview with Idaho News 6 that he is not vaccinated against COVID-19.

Even if Bundy is able to pick up those voters, Miles noted that he faces a challenge given that state GOP leaders have rejected his candidacy and the "chaotic political theater" of his continued pandemic protests (Greenwire, June 7).

Miles suggested that voters who are displeased with Little or want a more conservative candidate are more likely to back McGeachin.

"It really is a two-way race between Janice McGeachin and Brad Little," Miles said. "Maybe [Bundy] can fund raise off of it or maybe he can be next in line after Janice McGeachin has had her turn."