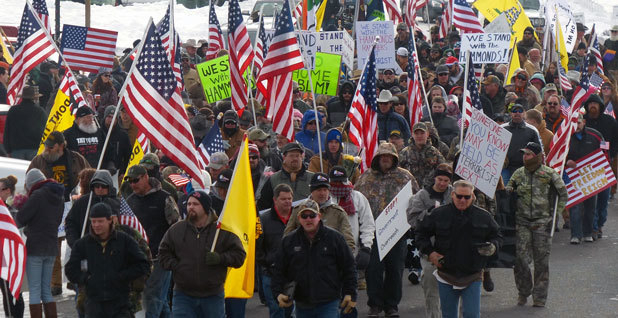 It’s the latest — and most brazen — attempt by activists to challenge the federal government’s ownership of roughly 640 million acres, most of it in the West, and to secure local control over the nation’s forests, refuges and public lands.

The bearded Ammon Bundy, wearing a plaid blue jacket and cowboy hat, said in a video posted by The Oregonian over the weekend that the 188,000-acre refuge will be "a base place for patriots all over the country" to take up arms against a tyrannical federal government. Occupiers have said they don’t plan to hurt anyone but will defend their position with force if challenged by law enforcement.

A U.S. District Court for the District of Oregon judge initially sentenced Dwight and Steven Hammond to three months and one year, respectively, in prison. But federal attorneys appealed, arguing that a 1996 anti-terrorism law requires they receive a minimum five-year sentence. U.S. attorneys argued that the fires put human lives at risk, including Steven Hammond’s then-13-year-old nephew Dusty, who was ordered to drop lit matches to ignite one of the blazes and later had to hunker down in a creek to avoid the flames.

Steven told Dusty to drop matches liberally "so as to ‘light up the whole country on fire,’" according to the 9th Circuit.

"There’s a larger context here," said Kieran Suckling, executive director of the Center for Biological Diversity. "What’s happening in Oregon is a logical outgrowth of right-wing rhetoric that demonizes even the concept of federal land — places like national parks and forests — and villainizes those who believe that publicly owned land should be more than just a source of profit for ranchers and corporations."

"I think they’re going to get frozen out sooner or later," he said, noting that temperatures in the mile-high region often plunge to below zero at night. The local power company could turn off the building’s heat, he said. "Logistically, this is not a good time to be there."

The refuge was established in 1908 by President Theodore Roosevelt as a breeding ground for native birds, including sandhill cranes that can be seen strutting across its meadows each spring. It’s an oasis of lakes and marshes in an otherwise arid high desert that sees frigid winters.

"Malheur Lake effectively has been this porch light in the summer," said Ron Cole, who recently retired after serving more than 30 years at the Fish and Wildlife Service, most recently as manager of Oregon’s Klamath Basin National Wildlife Refuge Complex.

"You could almost call them the public lands ISIS," he said. "They’ve decided they’re better interpreters of the Constitution than the Supreme Court."

"We expect our government to fully go after the people who break the law and punish those who do," said Sorenson-Groves. "At the same time, you’re trying to be measured so you don’t incite violence."