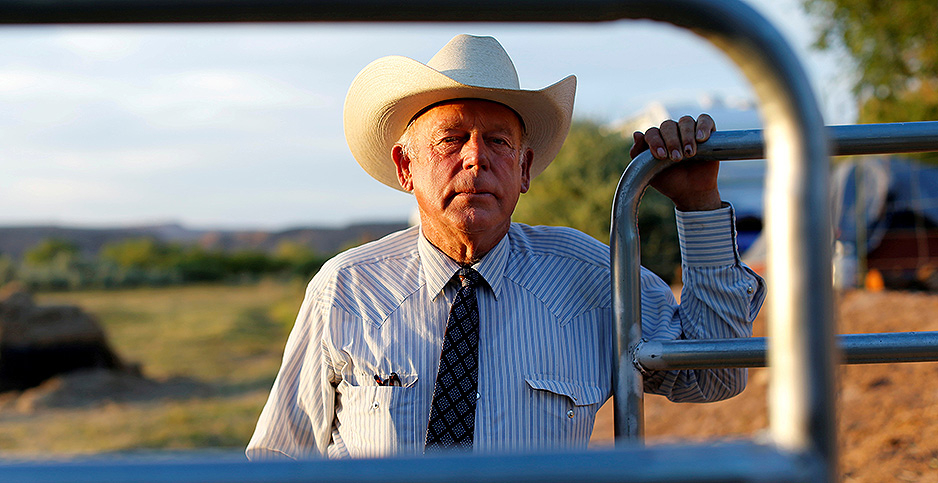 Rancher Cliven Bundy stands near a cattle gate on his 160-acre ranch in Bunkerville, Nev., on May 3, 2014. Mike Blake/REUTERS/File Photo/Newscom

Nevada rancher Cliven Bundy yesterday claimed a legal victory in his long-running feud with the federal government, but observers say it is unlikely his triumph will enliven anti-government activists — at least for now.

A three-judge panel in the 9th U.S. Circuit Court of Appeals ruled against the Justice Department’s bid to force a new criminal trial of Bundy and two of his children over their roles in a 2014 armed standoff with federal agents near Bunkerville, Nev. (E&E News PM, Aug. 6).

The decision ends a more than six-year public battle — and more than 20 years of what had been a parochial spat with federal land managers — sparked by the Bureau of Land Management’s attempts to seize Bundy’s cattle for unpaid grazing fees and trespass fines.

In response, Bundy and his family rallied heavily armed supporters, including some private militia groups, to blockade BLM’s roundup, and ultimately forced the government agents to abandon their efforts.

The incident would bring the Bundy family to national prominence for their fringe views about public lands ownership — based on a theory that only states and localities, rather than the federal government, may own public acreage (Greenwire, Dec. 13, 2019).

It would also spark large-scale armed protests, including an occupation of the Malheur National Wildlife Refuge by Ammon and Ryan Bundy.

But the Justice Department has repeatedly failed in its efforts to convict the Bundys over their roles in either event, effectively giving the family a national platform to further its anti-federal government activism.

Idaho resident Ammon Bundy, who has become a leading voice of opposition to his state’s efforts to curb the COVID-19 pandemic, often refers to his family’s battles with the government in public remarks and on social media.

"It’s very damning to the government, and it should be," Bundy said in a video posted to his Facebook account yesterday. "They put my family through hell. A lot of people say, well, you should sue them and yadda, yadda, yadda. … But I think that the right thing to do is just continue to keep standing."

‘Get out of jail free’

But observers suggest while the Bundys have successfully rallied supporters to their cause in recent years, the 9th Circuit ruling is unlikely to spark a new wave of activism.

"This is another moment … when the Bundys are going to claim they’ve been vindicated by the judicial system," said former Interior Department Deputy Solicitor for Land Resources Justin Pidot, who is now co-director of the University of Arizona’s environmental law program.

In its unanimous ruling, the appellate court affirmed a 2018 decision from U.S. District Court for the District of Nevada Chief Judge Gloria Navarro in which she declared a mistrial after determining that government attorneys had withheld key information from defendants.

Navarro also dismissed the case with prejudice, a decision that nullified the 16-count criminal indictment against Cliven Bundy and his sons, and blocked prosecutors from seeking a new trial.

Navarro’s ruling centered on an area of law known as the "Brady rule," which requires federal prosecutors to turn over exculpatory evidence to the defense. The rule is based on the 1963 Supreme Court case Brady v. Maryland.

Pidot described the results of the trial as a "get out of jail free" card for the Bundys, given that the ruling is a technical one.

"It’s mind-boggling that of all of the Brady violations that occur … this is the place where a case is dismissed with prejudice. It’s a remedy that almost never happens," he said.

Given the technical nature of the ruling and the Trump administration’s more "sympathetic" stance to ranchers and other public lands stakeholders, Pidot suggested renewed activism is unlikely to take hold.

"There’s continuing simmering out there, and this will be more encouragement for the simmering, but I think the pace that we may see it beginning to boil is if, after the election, there’s a Biden presidency, that will be viewed as more hostile to resource users," he said.

Pidot added that after the November election, "We may see this decision and the whole history of the Bundys being held up as evidence that these lands are not federal lands and these lands belong to or should belong to local folks who want to use them for their own private businesses."

"Essentially, it gives a green light to some of the anti-public lands folks to go forward and not pay their grazing fees, or take some other illegal action," O’Neill said, pointing to issues like illegal road construction or violations of environmental regulations.

"The botched prosecutions in this case and in the Malheur [National Wildlife Refuge] occupation has made the Bundys heroes in some quarters, including the White House," he said, "and will probably inspire similar acts of criminal trespass and vandalism of public lands in the name of the Sagebrush Rebellion."

He added that "one can only hope that the feds have learned some things about how to deal with the likes of the Bundy gang and exercise their authorities to protect the public’s natural resources more effectively."

Parenteau noted the appellate decision doesn’t have any direct effect on public lands law, nor does it set any precedent for criminal prosecution.

It remains to be seen whether the federal government will attempt to continue to pursue the Bundys, via either a new trial or a new seizure of the cattle that continue to graze on public lands.

U.S. Attorney Nicholas Trutanich for the District of Nevada defended prosecutors’ work on the Bundy case in a statement to E&E News.

"We respect the Ninth Circuit’s decision and appreciate its recognition that its decision today to affirm the 2018 trial court dismissal does not ‘cast aspersions on the professionalism of the members of the U.S. Attorney’s Office,’" Trutanich said.

"Rather, the trial team in the U.S. v. Bundy case team worked hard to do the right thing in a ‘difficult and trying case,’ and the Ninth Circuit opinion makes clear that it ‘in no way impl[ies] that the misjudgments made [in the case] rise to the level of professional misconduct.’"