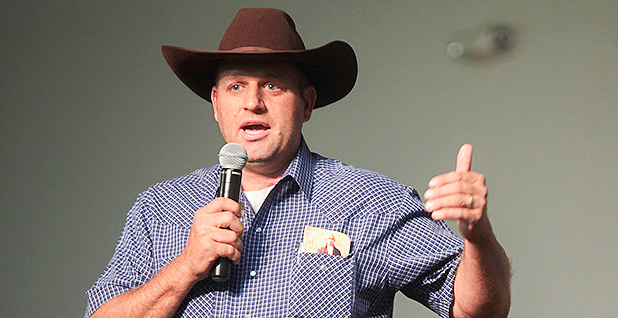 Ammon Bundy lashed out this week at unnamed "bureaucrats" after he failed a federal background check required to purchase firearms, and defended his past clashes with the government — including his leadership in a monthlong siege of the Malheur National Wildlife Refuge in Oregon in 2016.

In a series of videos posted to Facebook over the weekend, Bundy, the son of Nevada rancher Cliven Bundy, recorded his attempts to purchase an AR-15 rifle at a sporting goods store in Idaho.

An hourlong video records Bundy being denied the rifle after he failed a federal background check.

No reason is provided for the rejection. According to documents published by the FBI, potential buyers may fail the check because they have been convicted of felonies or domestic violence misdemeanors, have been committed to mental institutions, are living in the country illegally, or are under indictment for crimes with a potential prison term of more than one year.

Although Bundy was arrested and charged in connection with his role in both the Oregon occupation and a 2014 armed showdown with federal agents outside his family’s Bunkerville, Nev., ranch, he was not convicted in either case.

A federal jury in Oregon acquitted the seven leaders of the Malheur incident, including Bundy and his brother Ryan Bundy (Greenwire, Oct. 28, 2016).

In the Bunkerville trial, a federal judge declared a mistrial after finding that prosecutors had withheld key information from defendants, and later dismissed the case with prejudice, which barred federal prosecutors from staging a retrial.

Federal prosecutors are attempting to appeal that decision in the 9th U.S. Circuit Court of Appeals (Greenwire, Aug. 22).

In a seven-minute video posted after he was denied the rifle purchase, Ammon Bundy highlighted his acquittal and the dismissal.

"Before I was given due process, the bureaucrats made me guilty," said Bundy, seated in his car and wearing a cowboy hat and plaid shirt with a copy of the Constitution visible in his pocket.

In that same video, Bundy vowed to procure a gun, which he said he needs to defend himself against "street criminals and government criminals."

In a Monday video updating his attempts to procure a new gun, Bundy, this time in a straw hat and T-shirt, reiterated his innocence.

"I have not been convicted even so much as a misdemeanor," Bundy said, noting that his brother Dave, who was also charged in the Bunkerville incident, has recently been denied firearms purchases based on federal background checks.

"We have bureaucrats, full-time government employees, running agencies, and they are in control of our country," Bundy stated in the video. "They do whatever they want, however they want, whenever they want, and they can make anybody they want look like a criminal. … And a jury and a judge and a trial mean nothing."

He concluded his remarks by noting that he does not consider himself or his family "victims," and defended his past showdowns with the federal government.