Bundy would have received BLM permit — if he’d asked 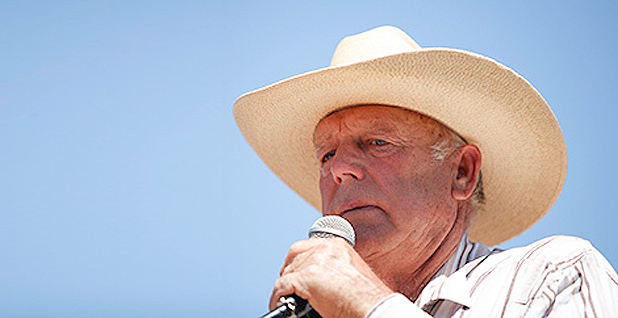 Nevada rancher Cliven Bundy would have gotten a new grazing permit, a Bureau of Land Management official testified yesterday, if he had answered repeated attempts to contact him. John Locher/Associated Press

LAS VEGAS — Even after Nevada rancher Cliven Bundy had defied court orders and grazed his cattle illegally for nearly 15 years, the government would have given him a new grazing permit if he had only responded to repeated entreaties, a Bureau of Land Management official testified yesterday.

Mary Jo Rugwell, who served as BLM’s Southern Nevada District office manager from 2008 to 2011, said the agency tried to reach Bundy via local law enforcement, his spouse and letters to his home, all of which he ignored.

Rugwell was the first witness to take the stand yesterday in the criminal trial of Bundy, his sons Ammon and Ryan Bundy, and Montana resident Ryan Payne over the 2014 armed standoff with federal agents near Bunkerville, Nev. The incident was sparked when BLM attempted to seize Bundy’s cattle over more than $1 million in unpaid grazing fees and related fines.

Federal prosecutors called Rugwell, who is now BLM’s Wyoming state director, to testify about her tenure in the office, including her decision in 2011 to initiate impoundment proceedings against Bundy’s cattle.

During nearly two hours of testimony, Rugwell reviewed court documents detailing Bundy’s long-running dispute with the federal government over his use of public lands as well as her own interactions with the Nevada rancher and his family.

Rugwell also provided the panel of 16 jurors with what amounted to a primer on BLM — including the agency’s multiple-use mandate; key laws that govern its actions, like the Federal Land Policy and Management Act; and even its place in the federal government hierarchy.

"It’s very difficult because everyone has their idea of what the most important use of public land is," she said of creating public land management plans.

Rugwell told federal prosecutors that following her arrival in the southern Nevada office in 2008, she reviewed the Bundy cattle situation and attempted to determine why almost no action had been taken in the decade since a 1998 court order that fined Bundy for each head of cattle that he continued to graze illegally.

"I could not understand that," she said.

Rugwell said she attempted to reach out to Cliven Bundy during a public meeting of the Nevada Department of Wildlife in 2011 where each had been invited to speak.

But rather than interrupt an extended conversation Bundy was having with other individuals, Rugwell said, she gave her business card to his spouse, Carol Bundy, and asked her to have him get in touch, which he never did. Rugwell said she also reached out via local law enforcement officials and in letters sent to Bundy’s home.

"We would have absolutely issued him a new 10-year permit," Rugwell said. She later added that the agency also offered to pay the expense of rounding up Bundy’s cattle — which numbered around 900 animals spread across 500,000 acres of land spreading south to Lake Mead — sell them at market and then provide Bundy the proceeds.

But ultimately, the agency moved to impound Bundy’s cattle.

"Impoundment is a very serious process. It’s something that we only do as a last resort … when nothing else is working," Rugwell said. She noted that at that time, the cattle had spread into areas popular for recreation and had damaged vegetation.

Federal prosecutor Daniel Schiess also had Rugwell read several documents stemming from Bundy’s legal battle with BLM in the early 1990s, after the agency reduced grazing permits in order to protect the desert tortoise, which had been newly listed as endangered.

During that time, Clark County officials purchased the grazing rights of other area ranchers and retired those rights under a plan that aimed to allow development in other parts of the county while preserving more rural areas for the endangered animal.

Bundy rejected a new, more restrictive grazing permit in 1993, Rugwell said, but continued to use federal lands in an area then known as the Bunkerville Allotment.

At the time, Bundy wrote that he believed he had "vested grazing rights" in the area.

That decision eventually triggered a 1998 court battle, which Bundy lost and in which a judge ordered new fines for each animal Bundy continued to illegally graze.

Bundy, who believes that the federal government cannot own large swaths of land as it does across the West, also lost an appeal in which he argued the federal court had no jurisdiction to hear the case.

Federal prosecutors will continue to question Rugwell this afternoon, after which the defense will be given the chance to cross-examine the witness.