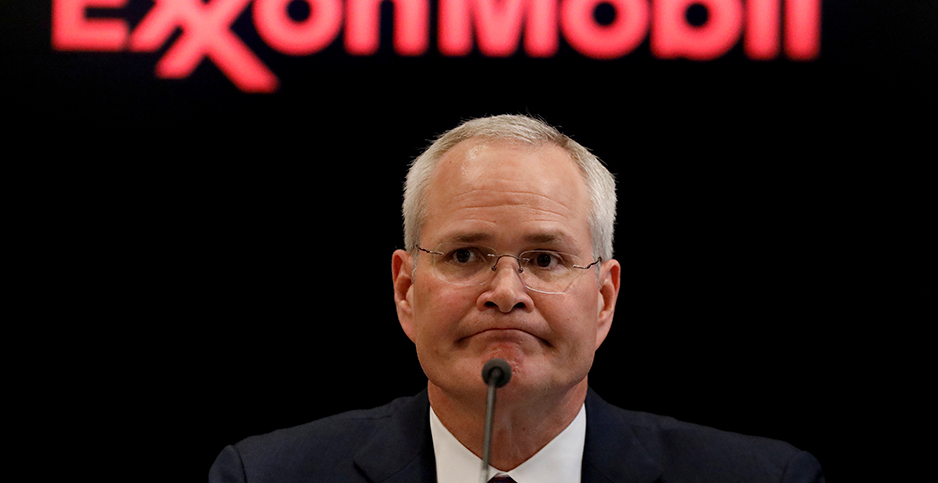 Darren Woods, CEO of Exxon Mobil Corp., speaks at a news event in 2017. The oil giant predicted internally that its emissions would balloon by 2025. Brendan McDermid/Reuters/Newscom

In a presentation to investors early that year, the CEO of America’s most prominent oil company outlined a strategy to double Exxon’s earnings by 2025. It called for a massive increase in drilling: 25 new projects capable of boosting production by about 1 million barrels a day.

The drilling binge promised to be lucrative. Exxon’s financial presentations estimated earnings would jump 35% with a modest oil price of $40 a barrel. That figure would soar 135% if oil hit $60.

Unmentioned was what Exxon’s drilling boom meant for the planet. But internal documents obtained by Bloomberg News show the company had a precise estimate of the climate costs.

"It is the equivalent of not wearing the mask in public," said Paula DiPerna, a special adviser at CDP, a nonprofit that tracks corporate emissions. "I wouldn’t say it’s such a surprise, but it is very disappointing to see a company of this size go against the tide of history and thumb its nose at the science."

The Bloomberg report shines a spotlight on Exxon at a time when its large European rivals are announcing plans to boost investments in renewables and slash carbon emissions. The gulf has been building slowly for years. By the time Woods announced Exxon’s new drilling plan in 2018, BP PLC had already acquired the solar developer Lightsource Renewable Energy and Royal Dutch Shell PLC had outlined a plan to cut the carbon intensity of its products in half by 2050.

Those divisions have only grown recently.

BP and Shell are now among a host of European oil giants committing to net-zero emissions by midcentury. BP has gone further still, pledging to cut oil production 40% over the next decade. Shell is reportedly mulling a similar move.

Exxon, by contrast, has showed little appetite for overhauling its business. Woods has dismissed the green ambitions of Exxon’s European rivals. The company’s investment presentations regularly predict global energy demand will grow as more people around the world join the middle class. And it has steadily increased its production targets in the Permian Basin of Texas and New Mexico.

The coronavirus pandemic has complicated Exxon’s plans — but only slightly.

The company has cut its capital spending 30% to $23 billion because of COVID-19 and the resulting economic downturn, but oil has continued to flow from the Permian. In July, company executives said they anticipated production from the basin will be 345,000 barrels a day this year, slightly below the company’s projections at the beginning of the year but still a 70,000-barrel increase over 2019 levels. Production will likely start to fall in 2021 if the company does not resume a more robust drilling plan.

Casey Norton, an Exxon spokesman, did not contest the accuracy of Bloomberg’s emissions figures. Instead, he challenged the outlet’s description of the numbers, saying they represented a projection of future greenhouse gas levels rather than a plan to increase emissions. Exxon is on track to cut methane emissions 15% of 2016 levels by the end of this year, he said.

"The emissions projection you cite is an early assessment that does not include additional mitigation and abatement measures that would have been considered as the next step in the process," Norton said in a statement. "The same planning document illustrates how we have been successful in mitigating emissions in the past. As demand returns and capital investments resume, our growth plans will continue to include meaningful emission mitigation efforts."

Exxon reported emissions from its operations of 124 million tons in 2018, or slightly less than what Nigeria emitted that year. That is roughly unchanged from the 123 million tons the company reported in 2009. Exxon officials noted those emission figures have remained unchanged even as the company has boosted production.

Oil and gas production accounted for 58 million tons in 2018, or roughly 47% of Exxon’s total emissions output. The company’s refining and chemicals divisions accounted for 42 million and 24 million tons, respectively.

Analysts said the figures show Exxon has improved the carbon intensity of its operations. Still, they noted the amount of CO2 pumped into the atmosphere is ultimately the metric that matters most to the planet.

"By focusing on the emissions of extraction, we are nibbling around the edges of plans to produce more and burn more oil," said Rob Jackson, a professor of Earth system science at Stanford University. "A company can improve carbon intensity but have emission go up if they produce more oil and gas. That is what we’re seeing here."

He added, "Clearly, Exxon understands what they’re doing is not enough to reduce emissions, and that’s not even including Scope 3 emissions."