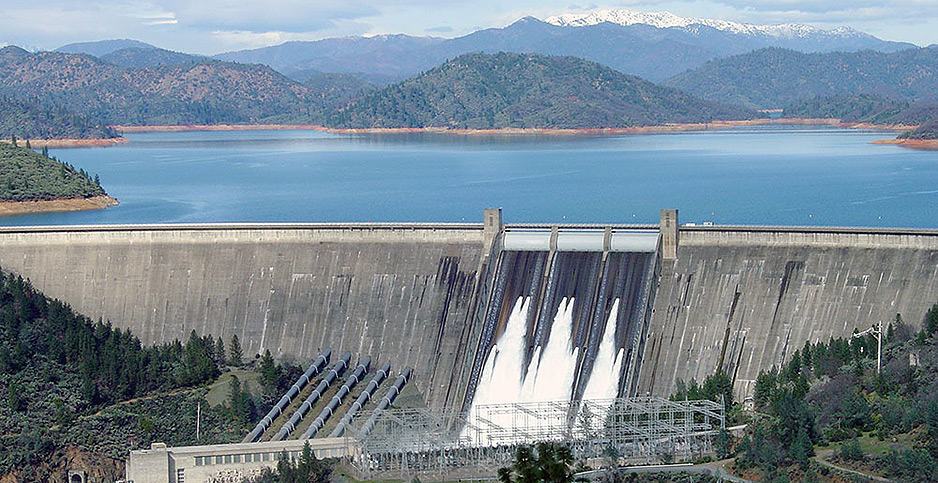 California’s Shasta Dam is part of the Central Valley Project. Bureau of Reclamation

The law also irked influential farmers, stunned some of Bush’s fellow Republicans and incited seemingly endless litigation as well as futile GOP repeal efforts. In other words, the CVPIA was a boulder heaved into a pond that’s still rippling as a result.

"Circumstances conspired to cast President Bush in the historic role of the Western Water Policy Reform President, whether he liked it or not," attorney Tom Jensen, former majority counsel for the Senate Energy and Natural Resources Committee, said today.

Chiefly authored by then-Rep. George Miller (D-Calif.) and then-Sen. Bill Bradley (D-N.J.), the Central Valley Project Improvement Act was several years in the making and ultimately became the most significant recasting of a project with roots in the New Deal.

Stretching 400 miles from Shasta Dam in the north to Bakersfield in the south, the CVP includes some 20 dams and reservoirs as well as canals and associated facilities.

Bush signed the CVPIA on Oct. 30, 1992, just days before the November election he would lose to Democrat Bill Clinton. Bush’s signature, however, did not come easy or by chance.

California’s then-Gov. Pete Wilson (R) strongly opposed the legislation, as did the state’s biggest agricultural water districts, whose farmers had been consistent political and financial supporters of Bush.

The farmers faced political calculations of their own, including the tension between those who counseled for negotiations on the recognition that reform legislation was inevitable in a Democratic Congress and those who banked on a presidential veto.

Congressional Democrats, though, had folded the California environmental legislation into an all-encompassing package that included 40 separate titles providing for water resource projects throughout the West. Many of the non-California provisions were championed by GOP lawmakers.

"Western Republicans exerted tremendous pressure on the president to sign the bill," authors Itay Fischhendler and David Zilberman noted in a 2005 scholarly journal article. "That made it all but impossible for the president to cause a threatened veto, as it would undermine candidate Bush’s popularity in Western states."

The Bush administration, Jensen added, "also included some budget hawks and the kind of Republicans who frowned on corporate welfare."

In the end, California’s appointed Republican Sen. John Seymour, who was about to lose his own race to Democrat Dianne Feinstein by a resounding 58-34 percent margin, was all but alone on the Senate floor trying to stop the fast-moving train.

Seymour declared in Senate debate that he "[would] not support legislation that benefits one group at the expense of another, or does not address the needs of legitimate California interests," and critics said the bill was imperfectly drafted.

"An election was looming and the members needed to bring home their bacon, CVP irrigators be darned," Jensen said, adding that "after hemming and hawing for several days, President Bush signed the bill."