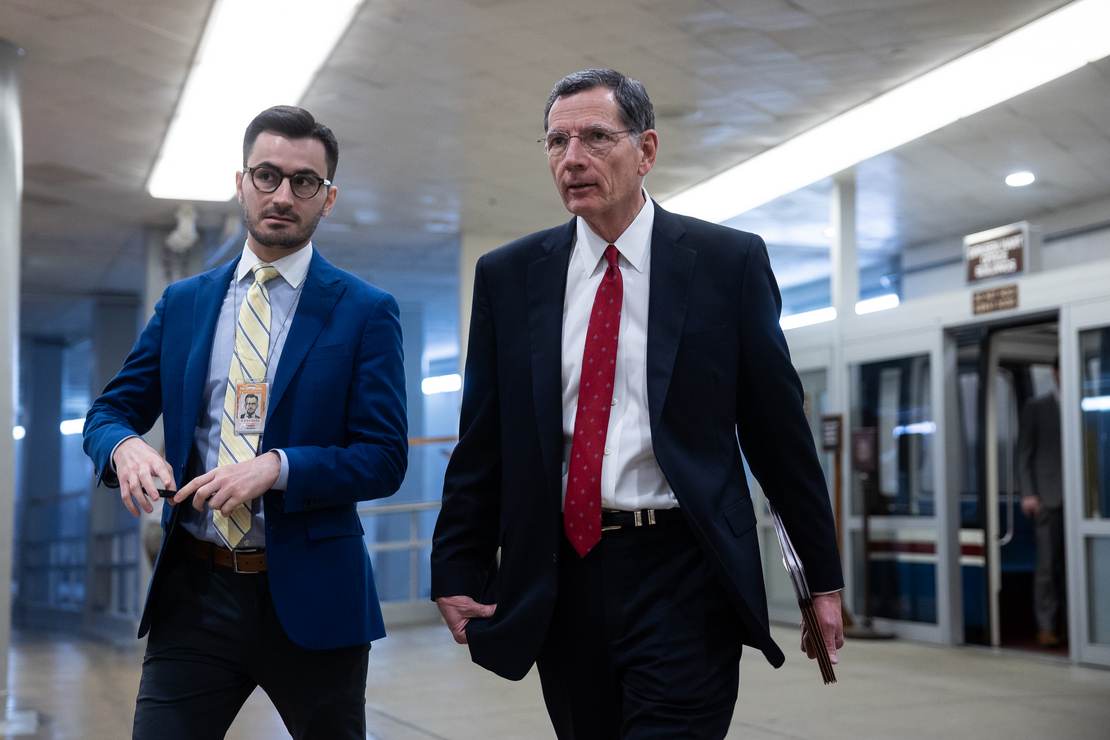 When it comes to climate regulations, Republicans and big business may be headed for a divorce.

In the last decade, there has been growing daylight between industrial interests and their onetime Republican allies when it comes to curbing emissions and transitioning to lower-carbon technologies.

U.S. industry has come to accept — or even support — regulations they spent decades resisting. Pushed by shareholders and changing political winds in the U.S. and overseas, corporations are spitting out zero-emissions pledges, talking up the Paris Agreement and offering to “engage constructively” with federal agencies they spent years battling in court.

Trade associations that were once the fiercest opponents of EPA regulatory authority — like the American Petroleum Institute and the U.S. Chamber of Commerce — have moderated their tone under pressure from their members.

But in the halls of Congress and in the states, Republican rhetoric against regulations hasn’t cooled.

Rather than take their cues from business, as they might once have done, the GOP has echoed decade-old arguments by blaming climate policies for blighting U.S. competitiveness, driving up gasoline prices and killing jobs.

Federal lawmakers spent the Trump administration cheering on the removal of rules, including some backed by industry. Now they are gearing up to attack the Biden administration for rejuvenating climate regulations.

And red-state attorneys general are the lead petitioners — along with coal companies — in a case now before the Supreme Court that could constrict EPA’s utility regulations for carbon. Investor-owned utilities that challenged the Obama-era Clean Power Plan are either sitting on the sidelines or have joined briefs defending EPA’s authority to regulate them.

With the Republicans widely expected to reclaim control of one or both chambers of Congress this year, this begs the question: Can industry influence Republicans on regulation? Or might the next two years see a Republican Congress working to block rules that U.S. businesses have said publicly they support?

Since former President Donald Trump’s ascension to the White House five years ago, it has become increasingly evident that conservatives and big business are no longer singing from the same hymnal — on environmental rules, or much else.

“There’s definitely been a split between big corporate interests and the GOP, you know, since the Trump administration,” said George David Banks, a White House energy adviser under Trump.

Take EPA’s bid to directly regulate methane emissions from the oil and gas sector as a case in point. Industry’s support for the policy has been growing steadily over the last half-decade. They see it as a way to safeguard the image of gas as a “bridge fuel” to a cleaner power grid, and as a response to shareholder pressure on climate change.

By August 2020, when the Trump EPA replaced an Obama-era standard with a laxer version that didn’t take direct aim at methane from oil and gas operations, most major oil companies were on the record supporting something closer to the Obama administration’s approach (Climatewire, Sept. 6, 2019).

At the time, API supported Trump’s revision, arguing in a statement that it was “consistent with the requirements of the Clean Air Act.”

Six months later, on the day after President Joe Biden was inaugurated, the powerful industry group reversed its long-held resistance to direct methane regulation. API President Mike Sommers in a blog post expressed “a desire to work with the new Biden administration to develop durable regulation that follows the law.”

Wyoming Sen. John Barrasso, the top Republican on the Senate Energy and Natural Resources Committee, described API’s call for methane regulation as a “disastrous idea.” Rep. Garret Graves, the Louisiana Republican who serves as ranking member of the House Select Committee on the Climate Crisis, accused the lobby group of taking “a cop-out approach to appease the radical left.”

Nine months later, when the Biden EPA released its draft methane rules, which covered existing oil and gas facilities for the first time, Sen. Shelley Moore Capito of West Virginia, the top Republican on the Senate Environment and Public Works Committee, called it “yet another attack on U.S. energy.”

But industry experts say there are pragmatic reasons for oil and gas to back federal methane regulation. Besides providing a reputational boost with shareholders and customers, a federal standard provides uniformity for producers that operate in oil fields governed by different state laws, or that have operations in multiple countries.

“They know the writing’s on the wall, right?” said Sanjay Patnaik, director of the Center on Regulation and Markets at the Brookings Institution. “They know that Europeans have a carbon price, they have greenhouse gas regulations, they see these regulations coming up all over the world — and most of the time they are more strict, I would say, than in the U.S. And they hate a patchwork.”

Patnaik also noted that established firms may see rules they have a role in shaping as a possible “barrier to entry” for smaller would-be competitors that might find it harder to bear the cost of compliance.

Environmentalists say they take big business’ conversion on climate regulation with a healthy grain of salt. Companies like Exxon Mobil Corp., industry groups like API and lobbying interests like the Chamber were against climate action before they were for it, they note. And questions remain about how much businesses lobby for climate rules versus trying to ensure they’re as inexpensive as possible.

Oil and gas companies that have trumpeted their support for methane regulation have in recent years lobbied EPA to exclude low-producing wells from its rules, even though those can be major sources of emissions.

And Sen. Sheldon Whitehouse (D-R.I.), who for years has dedicated floor speeches to decrying industry obstruction of climate action, said in February that while corporations talk a “big game” on climate, it doesn’t extend to their lobbying.

“Here, in this building, where the legislative rubber hits the road, corporate America has been totally, utterly, completely MIA on climate,” he said from the Senate floor.

For whatever reason, much of the petroleum industry now backs methane regulation — at least in concept — and it’s unclear how much pull they will have if Republicans win a majority in the House or Senate.

If the GOP retakes control of Congress in November, they’d have the opportunity to undermine the methane rules legislatively. The agency is expected to finalize rules for new and existing oil and gas sources next year — timing that would afford Senate Republicans a chance to jettison the rules with a simple majority vote.

President Joe Biden would be expected to veto it, so it would amount to a messaging vote. But it would be a rejection of the message now emanating from much of the petroleum industry — that methane rules can be workable and not an undue burden on producers.

Republican staffers say they expect a GOP-led Congress to advance policies that benefit consumers and small businesses, not big business.

One Republican staffer said scorecards by inside-the-beltway trade and lobbying behemoths have become less important to Republican members in recent years. Recommendations by powerful groups like the Chamber or API, he said, while still influential, are no longer determinative.

For one thing, constituents aren’t likely to recognize them.

“If you did a general poll and asked: ‘Hey, what is API?,’ most people wouldn’t know,” he said.

Emerging divisions between Republicans and business make it less likely that industry will get the one thing it may crave most — regulatory certainty. A regulatory seesaw between Democratic and Republican administrations has characterized the last decade and a half of federal climate policy.

Jeremy Symons, a clean energy advocate who has led multiple campaigns in Congress, said fossil fuels companies are reaping what they have sown after years of funding anti-regulatory politicians and think tanks.

“The fossil fuel industry created Frankenstein’s monster,” he said. “They’ve invested heavily in a misinformation campaign to feed their agenda at the time. And now it has overtaken their ability to control it.

“Republican politicians are responding to their voters who believe the lies they’ve been told along the way,” Symons continued. “The anger is hot. EPA is the enemy, that clean energy is unAmerican, you name it.”

Oil and gas isn’t the only sector that has softened its historic opposition to EPA regulation in recent years. Major U.S. car manufacturers were generally supportive last year when EPA released new, tougher tailpipe emissions rules, though they asked for incentives and other policies to lower costs.

For-profit utilities, which continue to slash coal investments from their books, are taking a wait-and-see approach on upcoming power plant carbon rules. And Biden hosted utility CEOs and the Edison Electric Institute at the White House in February to highlight their support for clean energy provisions in his stalled “Build Back Better” bill.

Mike McKenna, a Republican strategist, said big business was burning its bridges with Republicans, whom he predicted would be less responsive to industry needs if they regain control of Congress and the White House.

“If I were a CEO of a Fortune 500 company, I would be very nervous about this because they’re essentially a man without a country,” he said.

“I cannot think of a time in my life when the auto guys and the utility guys want something — anything — and the Republicans haven’t been anxious to help them,” said McKenna. ”Except for right now.”

McKenna posited that industry would have a hard time convincing Republicans to advance conservative tax and immigration policies if it continues to undercut the GOP on regulatory issues.

“They’re going to be totally adrift,” he said. “Ask the Chamber of Commerce what they think about it. How they get along with Republicans nowadays?

Marty Durbin, president of the Chamber’s Global Energy Institute, said his group has had no trouble getting meetings on Capitol Hill — with Democrats or Republicans. The shift on climate, which includes an openness to pricing carbon, has given the Chamber “greater credibility,” he said, in the eyes of Democratic lawmakers.

Durbin claimed that the Chamber played a role in helping to enact energy legislation in 2020 and the bipartisan infrastructure law last year.

“We just feel that’s the appropriate thing to do for us to make sure that the perspective and the interests and the priorities of the business community are front and center in the policy debates,” he said.

But Whitehouse said fossil fuels lobbyists had told him they feared that pushing too hard on climate would alienate GOP lawmakers, whose support they needed on other policies.

“Industry folks have told me they’re scared to press for climate measures, that they might be punished by Republicans working for the fossil fuel industry — punished on the tax and deregulatory and business stuff they really care about,” he said.