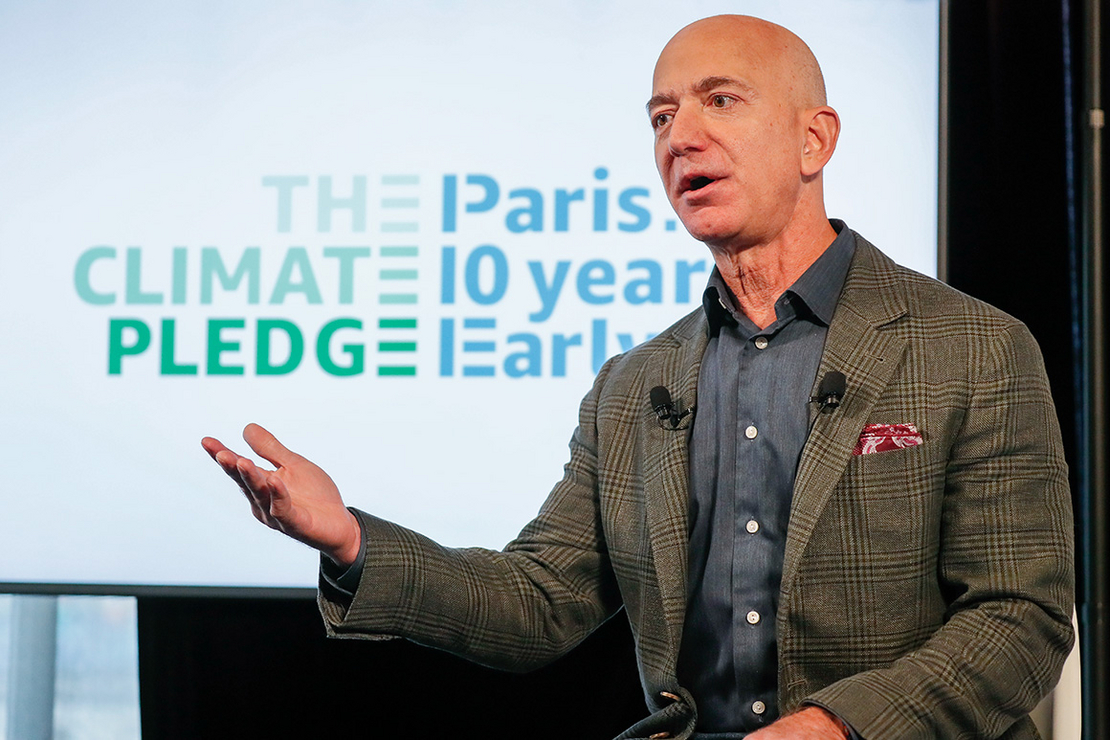 The Democratic bid to fight climate change through budget reconciliation is posing a major test for corporate climate commitments.

So far, top companies like Amazon.com Inc. and JPMorgan Chase & Co. are failing to embrace the high-stakes challenge, experts say.

“We should worry that the commitments are just green-washing,” said Michael Vandenbergh, an environmental law professor at Vanderbilt Law School.

Amazon, Walmart Inc. and Apple Inc. are some of the corporate giants that have reluctantly engaged in the public debate over the $3.5 trillion package, one of the most ambitious efforts to address climate change ever proposed in Congress. Democrats are trying to pass it using the reconciliation process to avoid a Republican filibuster.

Congressional leaders and the White House are still hammering out the specifics, but currently the bill aims to use tax increases on businesses and wealthy Americans to help fund rapid, widespread deployment of renewable energy projects and electric vehicles. It’s central to President Biden’s national commitment to cut heat-trapping emissions in half from 2005 levels by the end of the decade.

Amazon’s public policy team tweeted Friday that the e-commerce titan supports the bill’s investments “to lower emissions in energy & transportation” and said it believes the spending plan “will advance America’s carbon reduction goals.” The team’s account has about 15,000 followers — a fraction of the 3.8 million that follow its main account or the 195,000 followers of its news account.

Other powerful corporate actors, like JPMorgan, have been publicly silent on the bill. The nation’s largest bank, which aims to reach net-zero emissions by 2050, declined to comment for this story.

Both Amazon and JPMorgan belong to the U.S. Chamber of Commerce and other influential trade associations that are loudly opposing the reconciliation package in the halls of Congress and in well-funded ad campaigns.

Amazon didn’t respond to questions about whether its quiet support for climate-related elements of the reconciliation bill could be drowned out by the trade associations the company belongs to, which are seeking to kill the entire package.

But in a statement sent after this story was published, an Amazon spokesperson said the company “believes both private and public sector leadership is required to tackle the global issue of climate change. That’s why we actively advocate for policies that promote clean energy, increase access to renewable electricity, and decarbonize the transportation system.”

Last year, Amazon founder and Executive Chairman Jeff Bezos said “climate change is the biggest threat to our planet” and the company named a sports arena after its climate pledge campaign, which urges corporations to reach net-zero emissions in two decades (Climatewire, Nov. 14, 2020).

Amazon and JPMorgan are not alone in their mixed climate messaging.

Officials from Facebook Inc. and Microsoft Corp. are on the Chamber’s board of directors. Facebook’s operations are already carbon neutral, and it’s looking to do the same for its supply chain by 2030. Microsoft aims to be removing more carbon from the atmosphere than it emits within nine years and has lobbied in support of climate action this year.

But the Chamber, which supports a bipartisan $1.2 trillion infrastructure bill passed by the Senate, has led the corporate attack on the Democrats’ reconciliation bill.

When House Democrats approved a budget blueprint for the legislation in August, Chamber President and CEO Suzanne Clark said her group “will do everything we can to prevent this tax raising, job killing reconciliation bill from becoming law.”

The Chamber has followed through on Clark’s pledge. Last month, it called on House lawmakers to scrap the reconciliation effort and launched a six-figure TV ad campaign against the bill, targeting constituents of a handful of Democrats in swing districts.

After being contacted by E&E News, Microsoft on Saturday published a blog post outlining its priorities for reconciliation. The software company didn’t specifically address its prominent roles in the Chamber and other trade groups that oppose the legislation.

“Microsoft has been working with other stakeholders and conveying to members of Congress our support for strong climate and clean energy-related investments in both the infrastructure and reconciliation packages,” Lucas Joppa, Microsoft’s chief environment officer, wrote in the post.

“As Congress assembles the reconciliation package, it is critical that legislation promotes the development of innovative technologies, provides greater assistance to projects that remove carbon dioxide, applies federal purchasing power to clean procurement and invests in climate equity for frontline and disadvantaged communities,” Joppa added.

‘Called out as hypocrites’

Other powerful trade associations that are battling the reconciliation bill include the Business Roundtable, or BRT, and the National Association of Manufacturers.

BRT is currently running a series of Facebook ads in the home states of Sens. Kyrsten Sinema (D-Ariz.) and Joe Manchin (D-W.Va.), encouraging voters to call their lawmakers and “say no to tax increases.” Sinema and Manchin are widely viewed as the biggest Democratic obstacles to crafting and passing reconciliation legislation, which only requires 51 votes to pass the narrowly divided Senate.

JPMorgan head Jamie Dimon is on the board of BRT. The group also counts Andy Jassy and Satya Nadella, the CEOs of Amazon and Microsoft, respectfully, as members.

One of Microsoft’s lobbyists serves on the board of the National Association of Manufacturers. That association is targeting Arizona and West Virginia voters with social media ads, which warn that provisions in the bill that aim to cut prescription drug prices “will only hurt our workforce and economic recovery.”

“These are difficult issues for companies because the reconciliation package and the infrastructure package very likely include elements that go far beyond climate change that companies may be in favor of or opposed to,” he said.

“Companies have to succeed in blue states and red states and over the long term, despite the swinging pendulum of political control,” said Vandenbergh, who served as EPA chief of staff during the Clinton administration. “So companies are likely hoping in some cases that they can lay low.”

But he added, “on balance, I still think that if they’re going to be consistent with the commitments that they’ve made, that they need to support this legislation. And that they are vulnerable to being called out as hypocrites if they don’t.”

Yet even companies that have openly backed all or part of the reconciliation package have been targets of criticism from progressives.

Popular Information, a newsletter run by a former Center for American Progress staffer, last week noted that while Lisa Jackson, Apple’s policy head, sent a tweet supporting the climate provisions of reconciliation, her boss Tim Cook is a BRT board member. “Bad Apple” was the title of that edition, which was widely shared on social media and discussed on the MSNBC show “All in with Chris Hayes.”

Apple, which is carbon neutral and has said its supply chain and products will reach net-zero emissions by 2030, declined interview requests and didn’t provide an on-the-record response to emailed questions.

Walmart, whose CEO Doug McMillon currently serves as BRT chair, has cautiously weighed in on the reconciliation effort. The nation’s top retailer is the second-largest employer in both Arizona and West Virginia and has been a corporate climate leader for more than a decade (Climatewire, May 17, 2019).

“Walmart is encouraged by the many climate-related policy proposals being debated by Congress, including proposals made through budget reconciliation and the Infrastructure Investment and Jobs Act, as well as additional ideas being surfaced in policy circles,” Kathleen McLaughlin, Walmart’s chief sustainability officer, wrote last week on her personal LinkedIn page.

“We urge our national leaders to find ways to enact much-needed legislation to enable the U.S. to move forward on climate action now to avoid the worst effects of climate change in the future,” she added.

Walmart declined to make executives available for an interview. But spokesperson Jennifer Rodriguez emphasized that the company “has not taken a position on any specific bill.”

Some environmentalists are closely following which corporations are speaking up about the reconciliation bill and believe those businesses deserve measured praise. Writing tweets and LinkedIn posts, however, are just the first step.

“Every company that’s a member of a trade association is facing a reckoning right now between their own statements and commitments on climate and their trade association’s lobbying to kill the entire bill,” said Victoria Mills, a managing director at the Environmental Defense Fund.

Executives who sit silently by or offer faint support for reconciliation while the trade associations are “lobbying to kill the one chance we have to pass climate legislation is an untenable position if you’re serious about fighting climate change,” she added.

Now is the time, Mills argued, for CEOs who want to avoid dangerous global warming to use their lobbying and messaging muscle to support the reconciliation package.

“If you say you’re for bold climate action, take that message to Congress now,” she said. “It’s public statements, it is direct conversations with lawmakers, it is op-eds — it’s the full-court press.”