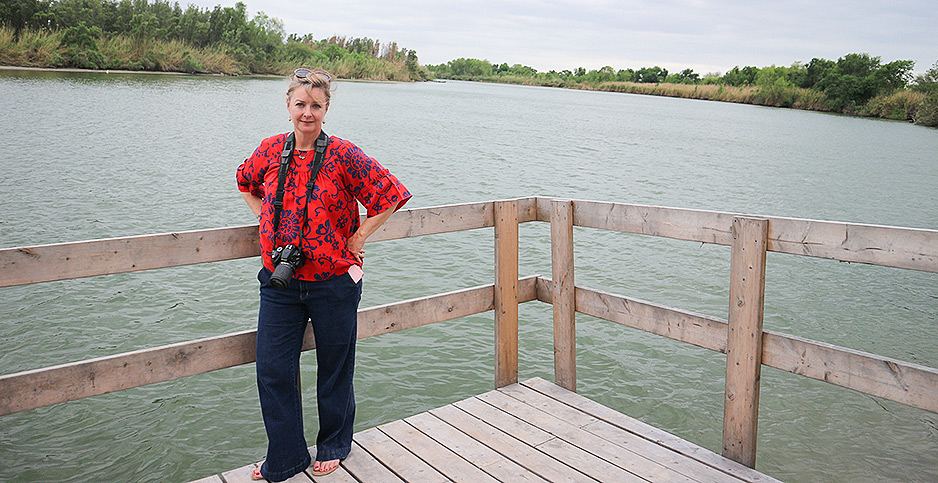 MISSION, Texas — At the edge of the National Butterfly Center’s property, there’s a small floating dock that juts a few feet out into the Rio Grande, tilted at a noticeable angle toward the Mexico shore thanks to the river’s low water level.

Visitors to the 100-acre nonprofit wildlife preserve can take a dirt track from its entrance and make the short drive to park near the river and observe birds like kingfishers or fish from the dock.

Or the center’s Executive Director Marianna Treviño-Wright wryly offers a third option: "They can come to witness the invasion."

The butterfly refuge sits along a nearly 90-mile stretch of the nation’s southern border with Mexico that is slated to see construction of new border wall fencing, which the Trump administration has asserted is necessary to address an influx of immigrants via Mexico and Central America.

The North American Butterfly Association-owned site has become a focal point in the debate over adding new barriers to Texas’ 1,250-mile border with Mexico — the majority of the nation’s 2,000-mile southern boundary — much of it along the Rio Grande.

"There is indeed an emergency on our southern border," President Trump said at a roundtable with U.S. Border Patrol officials in Calexico, Calif., on Friday. U.S. Customs and Border Protection statistics have shown significant increases in both family units arriving in the United States and large groups of migrants, many of them seeking asylum from nations like Guatemala, Honduras and El Salvador.

But while the White House declared a national emergency in February in an attempt to relocate funds for border fencing between Yuma, Ariz., and El Paso, Texas, the Rio Grande Valley area in South Texas — where the butterfly center is located — has been targeted by congressional funding.

Lawmakers approved 33 miles of new border walls in last year’s $1.3 trillion omnibus spending bill, then added another 55 miles at a cost of $1.4 billion earlier this year.

Plans called for carving a new border wall — as high as 36 feet in some areas — through sites including the butterfly center, a state park and a pair of national wildlife refuges (see related story).

And that prompted Treviño-Wright into the fight — and the spotlight, as reporters and others have made the pilgrimage to South Texas to visit the center.

"They’re talking about building this border wall over 2 miles inland in some places and creating a vacuum behind it, and moving out all of the legitimate residents, businesses, enterprises like us so that everyone who would be there to witness, deter and report any criminal activity will be gone," Treviño-Wright lamented recently, standing to the side of a gravel road that runs along the top of the current levee. "That’s the opposite of what they should be doing."

‘Pouring concrete over it’

To the north of the gravel road that divides the refuge is the visitor center, a square modern building that houses a gift shop, classroom space and Treviño-Wright’s office. Inside the entryway, a large whiteboard details butterflies that have been tracked at the center — varieties of swallowtail, satyrs, emperors, leafwings and brushfoots, among others — and a smaller sign lists "notable bird sightings."

To the south of the road sits about two-thirds of the butterfly refuge, and a little more than a 1-mile walk ends at the banks of the Rio Grande.

"This becomes the new de facto border of the United States," Treviño-Wright explained as she stood on the road, pointing to where a planned 18-foot concrete wall would rise from the foot of the existing earthen barrier. Another 18-feet of steel bollard would top the fence.

In addition, Border Patrol plans would widen the existing dirt road to what Treviño-Wright describes as a "superhighway" and pave an all-weather road on the opposite side of the border fence.

"For every mile of border wall they’re building, they are clearing a minimum of 20 acres," Treviño-Wright said. "This is a huge habitat loss of a remnant of native habitats. When you consider that we produce butterflies and bugs and birds the same way that a farmer produces cabbage — in inches and acres — taking thousands of acres out of production is going to dramatically diminish the diversity and the volume of species."

She added: "They’re not just clearing the land; they’re then pouring concrete over it. It’s not like everything will grow back."

The butterfly center sits next to the El Murillo Banco tract of the Lower Rio Grande Valley National Wildlife Refuge and a short distance from the Bentsen-Rio Grande Valley State Park, both areas that have likewise been targeted for new barriers.

In response to revelations that the butterfly center would be subject to new fencing, the North American Butterfly Association (NABA) filed a lawsuit against Secretary of Homeland Security Kirstjen Nielsen in late 2017, but its arguments were rejected by the U.S. District Court for the District of Columbia earlier this year. The case is now pending in the U.S. Court of Appeals for the District of Columbia Circuit (Greenwire, March 5).

But the center did win a reprieve from Congress. Earlier this year, Texas Rep. Henry Cuellar (D) authored language exempting the site — as well as four others: Bentsen-Rio Grande Valley State Park, La Lomita Historical Park, Santa Ana National Wildlife Refuge and the proposed SpaceX commercial spaceport — that was included in a spending bill for DHS and border security.

On Thursday, Customs and Border Protection announced it is beginning construction on 13 miles of border fencing in Hidalgo County, but that project would not include the Bentsen state park or the butterfly center.

Still, the government could push to declare eminent domain on the property, a concern that remains at top of mind for the center’s staff.

"I really want to still have faith in our courts and our Constitution and due process, but it’s diminished daily," Treviño-Wright said, noting that surveyors have already visited the property.

In the meantime, NABA is challenging the International Boundary and Water Commission over the recent installation of signs on the existing levee that declare it "government property" and off-limits to visitors.

The nonprofit, represented by the Texas Civil Rights Project and the American Civil Liberties Union Foundation of Texas, issued a cease-and-desist letter late last month to the IBWC asserting that it does not have any legal right to bar individuals from the butterfly center’s property.

"As you are aware, the IBWC is permitted to construct and maintain the flood control levee that transverses the NBC property pursuant to an easement Hidalgo County conveyed to the United States in 1974," attorneys wrote in a March 27 letter. "While the IBWC has a non-possessory easement to build and maintain the levee for flood control purposes, no part of the National Butterfly Center is U.S. government property, nor does the IBWC have the right to restrict access to any part of the NBC property."

Treviño-Wright’s anger is at times palpable — she sprinkles her language liberally with profanities, joking that the words serve as her "pressure release valve" — that the Trump administration and Congress are continuing to seek towering border walls in an area that has never before required them.

"I jokingly call it modern art, but because it’s ludicrous," Treviño-Wright said of the plans to create a fence with gaps for the butterfly center and other lands. "This is just a game of cat-and-mouse. That’s all it is."

Standing near the banks of the Rio Grande, she asked: "If they are Border Patrol, why are they not stationed here?"

A few days later, on a sunny Saturday afternoon, a series of Border Patrol boats patrolled the river itself, including one boat anchored in the shade of a tree a short distance from the butterfly center’s dock.

Human traffic on a 4-mile stretch of the river extending to La Lomita Historical Park was all but nonexistent, save for a small group of kayaks, a pontoon boat and a single Jet Ski.

In the same area, cattle and goats drank from the Mexican side of the river, while kingfishers and cranes flew overhead and a diamondback water snake nested above the water in a low bush.

"I have to stop here, and we have to look for butterflies," Treviño-Wright stated just a short distance from the visitor center, stopping next to a small tree covered in chrysalises that will become the red-bordered pixie butterfly.

She pointed up at the tree’s leaves: "They’re a little velvety black butterfly that likes to hang upside-down in the leaves. So you know, walking around like this, you would actually see them."

Although North American butterflies are primarily nonmigratory — unlike the painted ladies or monarchs — Treviño-Wright noted that the border wall and construction of related roads could still affect the populations in South Texas.

The Rio Grande Valley’s four-county region is home to 11 biologically distinct ecosystems, one of the features that attract a variety of butterflies and migratory birds.

"Each of those ecosystems has some flora that is completely unique to it. So that’s where you find specific butterfly species," Treviño-Wright said. "Each butterfly is intimately tied to one or two host plants. You eliminate that host plant from the landscape, you eliminate that butterfly."