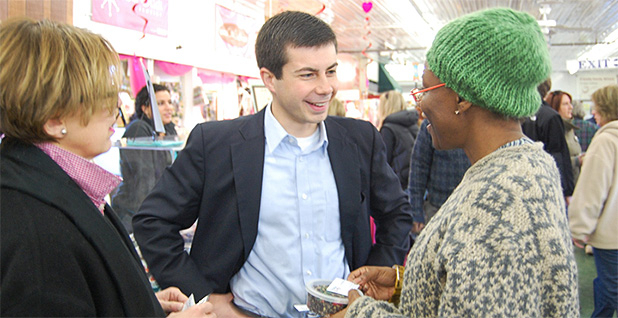 The mayor of South Bend, Ind., unveiled his "Douglass Plan" yesterday, named after abolitionist Frederick Douglass. The proposal says the federal government has a major role to play in assisting racial minorities, the poor and others who experience the effects of pollution in more extreme ways than the rest of the country.

"We’ve seen a rise in white nationalism, an economic gap between black and white workers that grows instead of shrinks, and worse health outcomes for black Americans, particularly new mothers, that should make us all wonder how the richest country on earth can allow this to happen under our noses," he said in a statement accompanying the release.

"The Douglass Plan will help heal our deep racial divides with bold policies that match the scale of the crises we face today," he announced.

Specifically, Buttigieg said he would expand enforcement of environmental laws, with a particular focus on black communities and other communities of color that have disproportionate health and other effects from pollution.

EPA "will be required to consider environmental justice in all its regulatory decisions," he said, adding that he would restore the prominent role of science at the agency in decisionmaking.

Lead is also a major focus of Buttigieg’s platform. EPA would be tasked with working with other agencies to take stock of lead paint in housing. He pledged to establish a new federal fund to fix the problem.

Buttigieg has previously come out in favor of a carbon tax as his main environmental position.