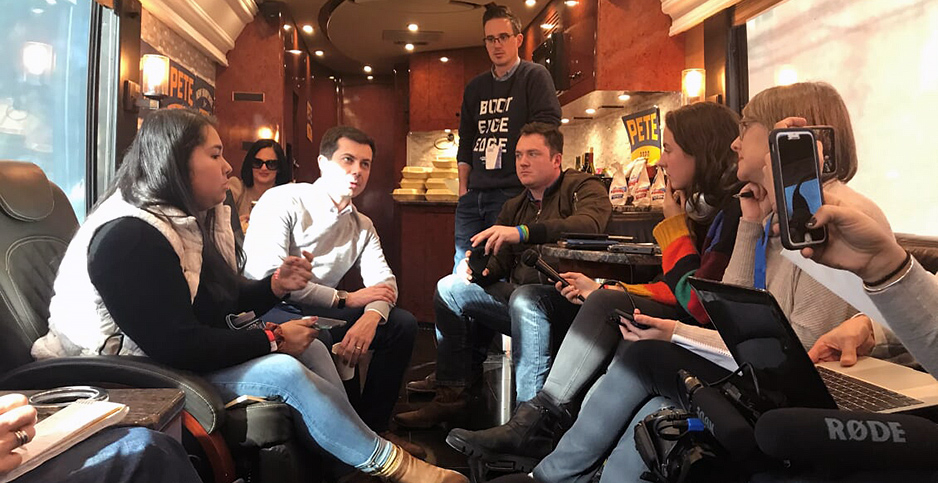 ABOARD THE BUTTIGIEG BUS, N.H. — Democratic presidential hopeful Pete Buttigieg defended his plan for fighting climate change, saying it is "more responsible" than some of the most expensive plans his rivals have endorsed.

At a cost of up to $2 trillion, Buttigieg said his plan is cheaper than Vermont Sen. Bernie Sanders’ $16.3 trillion proposal or Massachusetts Sen. Elizabeth Warren’s $3 trillion platform.

The South Bend, Ind., mayor said his solution isn’t any less ambitious than those from other candidates, and its lower cost makes it superior.

"If you’re measuring it in trillions of dollars, then yes, my plan is less expensive. But how much of the economy you put through the Treasury of the United States isn’t always the same thing as how bold you are," Buttigieg told reporters while traveling recently between Franklin and Lebanon, N.H., during a recent four-day swing through the state, home to the first presidential primary in February.

"When we start hearing about price tags that are equivalent to the entire size of the whole American economy, there’s a question about, first of all, whether it’s responsible to promise that, knowing what it would take to make that happen," he said, without specifically mentioning other candidates.

"And secondly, even if you could make it happen, governingwise, whether it’d be responsible to do it? Because really what we’re talking about is having a dramatically greater part of our economy go through the federal government … [so] even though I think it’s more responsible in terms of finances, I don’t pretend that it’s going to be easy."

Buttigieg, 37, is the youngest candidate in the Democratic field. He has been polling in the top tier of presidential hopefuls for a few months, but frequently behind former Vice President Joe Biden, Sanders and Warren.

On the campaign trail, he has been promoting many of his plans as alternatives to popular progressive ideas. Instead of Medicare for All or free college tuition, for example, Buttigieg is pushing for a public health care option that would allow people to keep their private plans, and free tuition for many students but not all.

Leah Stokes, a political science professor at the University of California, Santa Barbara, who has been tracking the candidates’ climate plans, said Buttigieg’s proposal may not be the most aggressive, but it has a lot of good ideas.

"I think Buttigieg could maybe be more ambitious," Stokes said, "but there’s a lot good in the plan."

Buttigieg would, for example, allocate $200 billion to research and development in his plan. That’s less than some other candidates, but the money would be directed to specific areas such as direct capture of carbon dioxide.

"Direct air capture is a very important technology, both to reduce atmospheric concentrations of CO2, as well as to figure out a way to deal with flying. I think most campaigns have ignored that in their plans," Stokes said.

Plans by Buttigieg, along with numerous other Democratic candidates, to stop new oil and natural gas drilling on federal land and restrict hydraulic fracturing nationwide could be a tough sell in Western states that depend on the industry.

But Buttigieg said Westerners would appreciate the job growth that his plan would bring.

"Our estimate is a 3 million net job gain from what I’m proposing to do around climate," he said. "So if the interest in fracking is motivated by the idea of job creation, what I’ve got to do is show that we can do so much more by way of job creation by going in new directions, rather than continuing to chase after our past when it comes to fossil fuels."

At town hall events, Buttigieg promotes his plan as properly ambitious, given the scale of the climate problem, but he rarely offers specific details.

He will, however, occasionally point out aspects that some of his competitors’ plans don’t have, such as a 2025 goal for doubling clean energy capacity.

"This is the defining challenge of our time, nationally and globally," he said at a Nov. 9 event in Lebanon. "And it’s here. It went from a theory, to a prediction, to an observation, to an emergency. And it’s happening in every community in different ways. This is not just something for the North Pole. This is not just happening on the coasts," Buttigieg continued.

"I’ve got a plan, starting with aggressive action to double the amount of renewable energy on the grid by 2025, which we need to do," he said. "Then we’ve got to get transportation to be carbon-free.

In speaking with reporters, Buttigieg said that if big spending is a "precondition" for climate plans, it makes the task "that much harder, because climate’s going to be hard to solve without preconditions."

Buttigieg’s supporters, and some undecided voters, think he’s up to the task to fight climate change, even if they don’t know the specifics of his plan.

"The reason that I like him is that he seems to have a general integrity about him. That’s why I’m drawn to him. Whatever he’s said so far, I’ve taken him at his word," Craig Vickers, an independent voter, said of Buttigieg before a town hall event in Walpole, N.H.

"Many of the others, I feel, are full of it when they’re talking about climate change," said voter Ted Kapinos.

Kapinos said his biggest concern about other candidates’ plans is how they would pay for it. "Where’s the resource? How are they going to come up with this kind of money, and how’s it going to affect the overall economy?" he asked.

A poll conducted in September by Morning Consult for the Sierra Club found Buttigieg ranked fifth among voters who say climate plans are "very important."

He was behind Biden, Warren, Sanders and California Sen. Kamala Harris in that survey, having fallen one spot from when pollsters conducted the same survey a month prior.