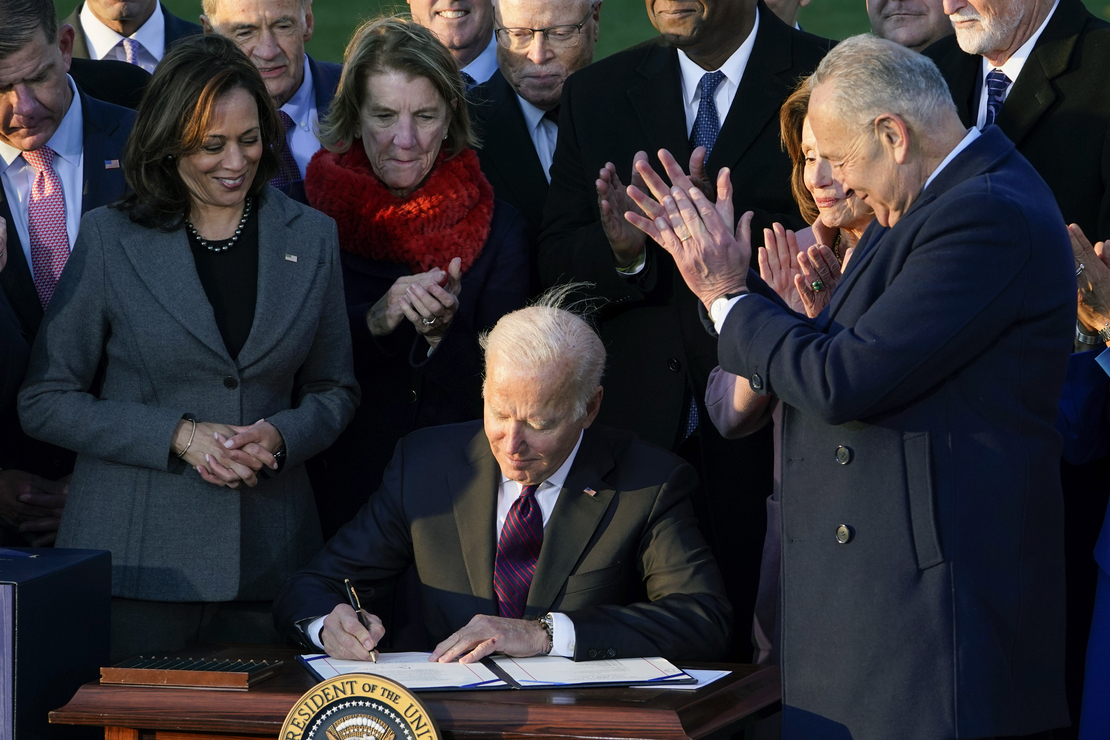 President Joe Biden is shown signing the $1.2 trillion bipartisan infrastructure bill into law during a ceremony on the South Lawn of the White House on Nov. 15, 2021. AP Photo/Susan Walsh

The nation’s largest water lobbies are calling on the Biden administration to grant project developers a two-year reprieve from “Buy America” requirements — warning that failing to do so will put a chokehold on federal infrastructure dollars.

Advocates say the administration has so far remained mum.

“These new, across-the-board domestic content requirements present an unprecedented opportunity to support good-paying construction and manufacturing jobs while strengthening our industrial base and promoting American innovation for years to come,” the White House Office of Management and Budget, which houses the Made in America Office, said in a blog post.

The infrastructure law reflects a growing trend in U.S. politics to prioritize products made in the United States. While some Democratic politicians have long championed “Made in America” policies, former President Donald Trump also claimed to back the idea. But certain industries stress that U.S. production for some of their essential parts does not yet exist.

Still, the White House has billed the policies as necessary to ramp up domestic production and create well-paying union jobs. But the water infrastructure industry has argued that the mandates throw a wrench into its industry and could stymie industry members’ efforts to build projects intended to fight climate change, provide safe drinking water, tackle sewage and protect the public.

“Since President Biden signed the law ten months ago, a clear understanding on how the various departments and agencies will implement the requirements does not exist,” a host of water trade groups and tech companies told EPA Administrator Michael Regan and Biden’s “infrastructure czar,” Mitch Landrieu, in a letter in September.

“This lack of guidance is creating significant uncertainties in the market, especially considering the time required to localize manufacturing capacity,” they added.

More than a dozen groups and companies, including the American Water Works Association and the National Association of Clean Water Agencies, or NACWA, warned Regan and Landrieu that operators of drinking water and wastewater systems rely on technology made abroad to comply with federal water quality mandates.

They are calling on the administration to give developers more time to comply with the provisions that require developers to only use parts that are domestically sourced.

A talking point among water groups notes that the Department of Transportation issued a temporary “Buy America” waiver for the electric vehicle sector amid supply chain concerns (Climatewire, Sept. 28).

“We haven’t had any response yet, which is unfortunate,” said Eric Sapirstein, founder of Washington-based consulting firm ENS Resources Inc. “We are trying to work with the administration to highlight our concerns, particularly EPA, and see if they can issue an adjustment period that delivers more certainty … and ensure trillions of dollars provided in the infrastructure law move forward into the economy.”

Kristina Surfus, NACWA’s managing director of government affairs, said the challenges that the “Buy America” provisions pose to the water sector are a “big deal,” noting that infrastructure dollars — and thus the requirements — are flowing into a host of programs, including state revolving funds and programs like the Water Infrastructure Finance and Innovation Act at EPA, as well as regional programs from the Great Lakes to the Chesapeake Bay and the Everglades.

The “Buy America” requirement that’s riling the industry was included in the bipartisan infrastructure law, and requires that applicants seeking federal grants, loans and other pots of money only use equipment manufactured in the United States, even though some equipment is only made abroad.

According to the groups, that could include high-speed turbo and other blowers; motors; smart meters and sensors/actuators; certain types of pumps; ultraviolet technologies; membranes and membrane bioreactors; reverse osmosis system equipment and piping; ozone treatment; monitors, data analysis and other smart technologies; and certain adsorbent media, including PFAS removal best available technologies.

Surfus said the sector isn’t opposed as a whole to the requirements, but the White House needs to be more flexible and release guidance that clarifies how project developers can comply with what can be complex mandates. “In order for them to be implemented effectively, there needs to be more time,” she said. “We don’t have the guidance we need right now.”

Water groups like NACWA have met with EPA to discuss how to implement the “Buy America” provisions, she said, and are now waiting for the Office of Management and Budget to release guidance around “domestic content,” which will lay out how developers can certify their compliance with the rule.

Surfus also noted that EPA issued and finalized a waiver this summer for project applicants seeking money from state revolving funds — pots of money for water projects that are receiving infrastructure dollars. But that waiver, she said, only applies to projects that were underway before the “Buy America” provision took effect in May.

In search of a ‘legislative fix’

Sapirstein said there’s a danger that some companies may opt not to use infrastructure dollars and instead turn to the bond market.

Yet another more troubling potential outcome, he said, is that the provision might chill investment in underserved communities — and consequently, the fulfillment of the Biden administration’s environmental justice goals — because of the uncertainty around whether their projects comply with the “Buy America” provision.

“If, in fact, these two points bear out … this money can’t get out into the ground,” said Sapirstein. “It just languishes.”

Sapirstein agreed that “Buy America” requirements affect critical funds across a wide swath of water programs, whether they be regional programs like the Great Lakes, money to tackle drought at the Bureau of Reclamation, or billion-dollar buckets of money at EPA in the form of state revolving funds.

Given that the bipartisan infrastructure law is “very unforgiving,” and there’s no language for providing relief other than that tied to applying for waivers, Sapirstein said there’s a need for “some kind of legislative fix for an agency providing a more meaningful long-term adjustment period.”

That puts the focus on Congress, he said, namely committees of jurisdiction.

“From our perspective, right now, given the state of the congressional agenda, and in the lame duck, our position is going to be that we will continue to work with the committees of jurisdiction over the water infrastructure laws,” including the House Natural Resources Committee or the Senate Environment and Public Works Committee, he said.

Sapirstein said the water groups will work with those lawmakers in the coming session to uphold the intent of the bipartisan infrastructure law while ensuring that the water sector can build critical projects.

“At this stage of the game, our sense is that if this becomes a disruptive force to the actual use of the federal dollars, that there will be some interest in modifying the mandate to accommodate — similar to the EV infrastructure issue,” he said.

“We’re working very hard to see if there’s interest in maybe having folks make the case for a better transition period,” he continued. “We set our sights right now on looking for opportunities to work with Congress, but also with the administration to see if there’s a pathway forward, even a temporary one.”