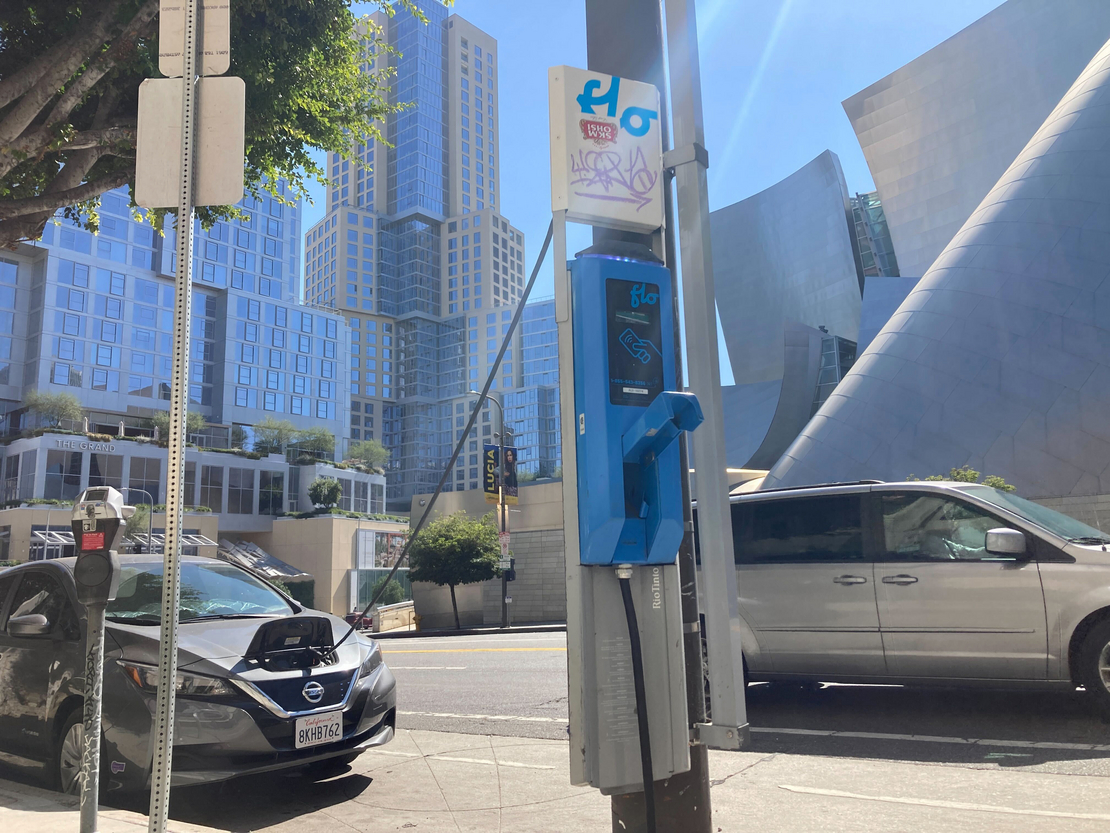 An electric vehicle connected to a public charger in Los Angeles is pictured in October. Eugene Garcia/AP Photo

Construction of a national web of electric vehicle charging stations could be delayed if the Biden administration enforces a January deadline to manufacture the chargers domestically, according to industry officials who are racing to build the network.

State transportation agencies, along with manufacturers and operators of electric vehicle chargers, say “Buy America” rules mandating that the EV chargers be made and assembled with U.S. parts and labor could derail their planning processes if they are implemented too quickly.

The officials are concerned that the runway for “Buy America” implementation is too short. American manufacturing of EV charger materials is still nascent and ramping up gradually, meaning there’s a high risk of bottlenecks and holdups as states and companies compete for a limited supply of domestic manufacturing options.

A proposed waiver from the Department of Transportation would impose “Buy America” requirements on the $7.5 billion charger network program starting next month. For state planners and charger operators, that timeline is impracticable for the kinds of fast chargers that the coast-to-coast network will depend on.

“None of the [charger network] funds have even been awarded yet, and so a waiver that ends in January is not really a waiver,” said Jonathan Levy, chief commercial officer at EVgo, which operates the country’s largest network of public fast-charging stations.

“With the way the waiver is currently written, we’re all kind of in a bit of a holding pattern,” he said. “We need a glide path; we need to make sure we have a timeline that matches the current market realities.”

EVgo and other groups are supportive of efforts to onshore the supply chain for EV infrastructure but have requested that the Biden administration extend the “Buy America” waiver through at least the end of 2023. Many states plan to solicit proposals for charging stations in the next several months, and they need to make decisions based on the availability and reliability of charger components. Without that leeway, projects may not begin in earnest until 2024.

That would be a setback for efforts to boost EV uptake. The Biden administration is banking on the charger network to accelerate America’s transition to clean vehicles and decarbonize the transportation sector by midcentury.

The charger network “is a massive tailwind to support the acceleration of electrification in the U.S.,” Levy said. “We just need to make sure that it’s done in a way that gives the private sector certainty and we can all execute on the vision of the legislation.”

Brendan Jones, president of Blink Charging, which manufactures and operates charging stations across the United States, said his company is already producing U.S.-made Level 2 chargers. But he acknowledged that the much faster and more complex Level 3 chargers — which will be the pillars of the charger network — cannot yet be produced domestically at scale.

“The capacity is not enough to service what the [charger network] budget calls for, so clearly you need more manufacturers to get more time here, especially on the [Level 3] charger side,” Jones said.

That extra time is critical for manufacturers to figure out what kinds of domestically produced components make sense to use and to get those components tested and certified for safety and reliability.

There is optimism among charger operators and manufacturers that the Department of Transportation would extend the timeline for “Buy America” applicability. The agency earlier this year issued its proposal to delay implementation until January for the sake of “public interest,” and seems likely to respond to industry concerns with another limited delay, said Jones.

“We’re operating off the fact that it’s not set in stone right now,” he said. The Biden administration has “listened to the industry quite intently, and we’re betting on a positive outcome.”

It remains unclear how exactly the Department of Transportation might adjust the “Buy America” applicability timeline. A Federal Highway Administration spokesperson said the agency is reviewing feedback on the waiver and would issue a final ruling “soon.”

In public comments, Electrify America, a charging station operator, expressed support for the existing proposal to phase in the requirements for the charger network over the next couple of years but requested that compliance for Level 3 chargers be extended to January 2025. ChargePoint wants to see that phase-in begin at least six months after the final waiver is released.

The Department of Transportation is expected to issue a final rule by the end of the year.