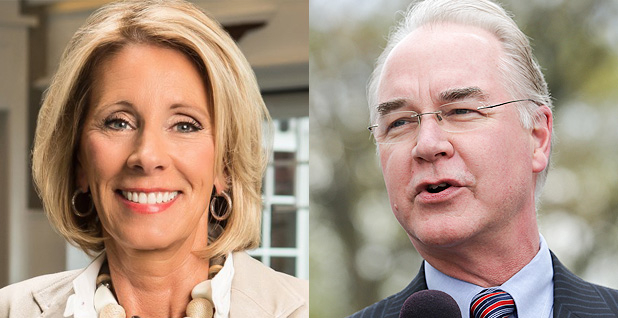 Betsy DeVos was not exactly a prime player in the Trump administration’s internal debate over whether to remain in the Paris Agreement.

But the Education secretary was ready to boost President Trump once he announced his decision yesterday to leave the climate change accord. She released a statement saying the president was rolling back "the unrealistic and overreaching regulatory actions" of the Obama administration.

DeVos was among several Cabinet secretaries to praise Trump’s decision to leave the international agreement — many of whom were not central to the administration’s discussions on Paris. Conservatives have cheered the president’s move to exit the deal, while environmental groups, large corporations and foreign allies have expressed disappointment.

An E&E News review of Cabinet-level agencies’ websites found statements on Paris from at least nine officials, not including Vice President Mike Pence and U.S. EPA Administrator Scott Pruitt, who both spoke during Trump’s announcement yesterday in the White House Rose Garden.

Labor Secretary Alexander Acosta said Trump’s decision to leave the climate deal showed his administration’s "bold commitment to promoting pro-growth principles and rebuilding America’s manufacturing base, which was under siege by the Paris accord."

Like Acosta, many Cabinet secretaries struck an economic theme, saying Trump was protecting U.S. jobs by stepping away from Paris.

Commerce Secretary Wilbur Ross said Trump "took one more important step towards restoring the primacy of American workers and American businesses by unshackling them" from the climate agreement, adding that its "amount of economic carnage is unjustified."

In April, Perry had said he wouldn’t tell Trump to leave the climate accord but instead suggested renegotiating it (E&E News PM, April 25).

Climate change, which the Paris deal was designed to combat, got little notice in the Cabinet members’ statements.

Agriculture Secretary Sonny Perdue, however, did bring attention to the issue.

"The Earth’s climate has been changing since the planet was formed — on this there is no disagreement. At USDA, we rely on sound science and we remain firmly committed to digging ever deeper into research to develop better methods of agricultural production in that changing climate," Perdue said.

DeVos was pressed today by reporters on climate change in light of her Paris statement. The Education secretary wouldn’t comment on how much human activity was to blame for climate change.

"Certainly, the climate changes. Yes," she told reporters, according to The Washington Post.

Secretary of State Rex Tillerson was noticeably absent from the White House Rose Garden yesterday during the president’s announcement on Paris.

Tillerson had advocated for staying in the climate agreement, but his side lost out to those advocating withdrawal.

Pruitt was a vocal critic of the Paris deal and has taken a victory lap — speaking in the Rose Garden after Trump yesterday and doing several media appearances since. He is slated later today to appear at the podium for the White House press briefing.

Unlike his fellow Cabinet members, Tillerson didn’t release a statement yesterday on withdrawing from the Paris accord.

This morning, a State Department spokeswoman told E&E News, "We refer you to the White House and President Trump’s remarks for the administration’s position on the Paris Agreement."

The secretary of State did end up taking a reporter’s question about the climate change accord during his meeting today with the Brazilian foreign minister. Tillerson said the United States has "a terrific record" in reducing greenhouse gas emissions, which will continue absent of Paris.

"It’s something I think we can be proud of and that was done in the absence of a Paris Agreement," he said.

"I don’t think we’re going to change our ongoing efforts to reduce those emissions in the future, either."