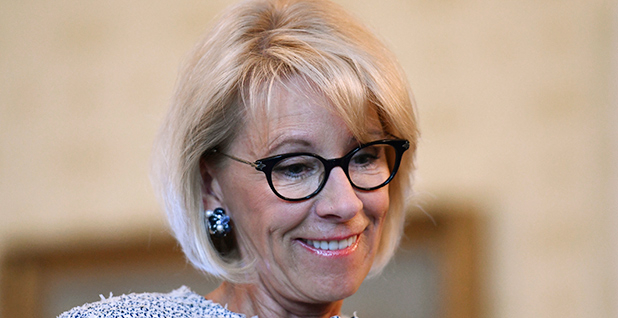 DeVos’ chief of staff approved the secretary’s two-sentence statement on Trump’s exit from the climate change agreement, with her espousing the president’s rollback of "overreaching regulatory actions" and keeping his promise "to put America and American workers first." Aides later worked to bring it to DeVos’ attention, according to emails obtained by E&E News under the Freedom of Information Act.

The emails offer a behind-the-scenes look at how the White House ordered agency leaders to publicly praise Trump’s announcement on Paris, which was a year ago today. Cabinet secretaries and their communications shops jumped into action, with messages ranging from DeVos’ vague praise of putting "America first" to Commerce Secretary Wilbur Ross decrying the "economic carnage" of the climate treaty.

Liz Hill, the Education Department’s press secretary, said that day in an email to another aide, "We didn’t send out a press release or anything, but we did [sic] out a statement on the website that she should be made aware of. It was approved by josh before it went up."

The Josh she referred to is Josh Venable, DeVos’ chief of staff at the department. Earlier that day, when Trump was announcing his decision on the climate deal, Hill sought his approval of DeVos’ statement.

"Sent over. Haven’t heard back," said the aide.

The day after Trump’s announcement on the Paris Agreement, reporters pressed DeVos on her statement during an event at a Washington, D.C., charter school. The Education secretary repeated her praise of the president but didn’t share much more, including her views on climate change.

"I’m here to talk about students and schools today, and I would hope that we could focus on the opportunity that these kids have in this unique environment and this unique school with amazing teachers and administrators," DeVos said, according to The Washington Post.

Education Department press officials, including Hill, didn’t respond to questions from E&E News for this story.

DeVos was one of several Trump Cabinet officials to issue statements on the president’s Paris decision. At least nine officials, including many not heavily involved in the move to withdraw from the agreement, released statements that day (Greenwire, June 2).

"Please join our surrogate briefing call at the below number at 1:30pm. We need all Cabinet agencies to prep statements of support for the decision being announced at 3:00pm in the Rose Garden," he said, asking those statements be sent to him and other White House press aides for approval within 30 minutes of the call’s conclusion.

Other agencies, too, quickly got to work after the White House request. The Commerce Department put together a statement from Ross saying the Paris deal’s "economic carnage" was "unjustified."

"Ill start drafting a statement. … Does he have an opinion on it?" Jillian Rogers at the Labor Department said in an email. Labor Secretary Alexander Acosta said in a statement that withdrawing from the climate deal would grow jobs and stimulate the economy.