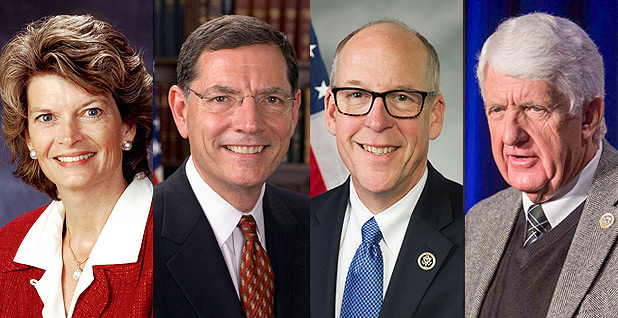 The Senate’s slow pace of confirming President Trump’s Cabinet — which remains mired in partisan fighting over the administration’s agenda, various controversies associated with individual nominees, as well as allegations of contact between the president’s campaign and Russian intelligence officials prior to his inauguration — is slowing committee plans to move legislation, top GOP lawmakers said yesterday.

While the transition from one administration to the next always involves growing pains, the lack of confirmed heads for U.S. EPA and the Interior and Energy departments has left committee leaders without points of contact for issues that fall in their jurisdiction.

"You can’t really start on this stuff, on serious business, until you get your nominees confirmed," former Senate Environment and Public Works Chairman Jim Inhofe (R-Okla.) said yesterday. "And I just think that everything’s kind of on hold until that happens, which may be the design of the Democrats."

While Senate GOP rules forced Inhofe to hand over the reins of the EPW Committee this year, he will play a key role in assembling the infrastructure package that was a top priority of candidate Trump as the chairman of the Transportation and Infrastructure Subcommittee. While Transportation Secretary Elaine Chao was easily confirmed by the Senate last month, Inhofe said she needs at least three deputies — all of whom will need Senate confirmation — in place to help firm up the White House’s infrastructure push.

"She’s got to have her team there," he said.

Sen. John Barrasso (R-Wyo.), who took over the EPW Committee from Inhofe last month, said yesterday that he’s working with the administration to flesh out legislative plans but noted that the nominee logjam is a complicating factor.

"It’s been less than four weeks but we’re still at a point where confirmation of the Cabinet is at a slower rate than George Washington’s," he said.

Another complication is the complexities involved with two early legislative priorities of the White House and congressional Republicans: repealing and replacing the Affordable Care Act and tax reform, both of which are tied to the budget reconciliation process, which will allow legislation to bypass the 60-vote filibuster threshold in the Senate but also face time constraints.

"There’s just a lot that needs to be done and at the same time the world is a very dangerous place," Barrasso said, noting that Russia, Iran and North Korea have all conducted missile tests in recent days.

But Sen. Tom Carper (D-Del.), the ranking member on the EPW Committee, said the administration is suffering from its own "self-inflicted wounds," which have delayed moving nominees and a legislative agenda. He noted the administration opted to nominate several "very controversial" picks for the Cabinet, including Oklahoma Attorney General Scott Pruitt (R) to lead EPA, that have caused Democrats to resist.

"As a candidate, Trump’s rhetoric was for destroying the Environmental Protection Agency and nominating someone who would appear very well-qualified for that is just asking for Democrats to slow things down to provide some kind of checks and balance," Carper added.

Senators from both parties, however, also suggested that any emerging legislative agenda is now being crowded out by concerns over the administration’s alleged connections to Russia.

"It’s certainly not helpful; in the end we want to get these questions behind us, and we think the administration needs to get those questions behind them so that they can move forward," said Sen. John Thune (R-S.D.), chairman of the Republican conference. He said Russia issues were "distracting" the GOP from a "bold agenda."

Sen. Lindsey Graham (R-S.C.) said Democrats had been "unfair" in delaying votes on most of the Cabinet nominees, although he conceded concerns over Russia need to be addressed quickly.

"To me it’s a cloud over the White House, and the way you fix this is for the president himself to work with the Congress in a bipartisan fashion to look into see what happened and let the facts speak for themselves," he added.

Sen. Chris Murphy (D-Conn.) said he does not see any legislation advancing until the Trump White House works with Congress to investigate possible campaign links to Russia.

"I don’t think there is going to be any bandwidth in the administration or Congress to move legislation if this crisis continues to unfold at its current pace," he added.

Republicans yesterday lauded Trump for carrying through on his campaign pledge to focus on repealing or blocking key Obama administration environmental regulations.

House Republican Conference Chairwoman Cathy McMorris Rodgers of Washington pointed to Republicans’ ongoing focus on the Congressional Review Act and the party’s efforts to repeal "some of the burdensome regulations, especially coming out of EPA in recent years," using that law.

"That’s been the focus from the beginning," McMorris Rodgers said.

Senate Energy and Natural Resources Chairwoman Lisa Murkowski (R-Alaska) pointed to Trump’s early action to facilitate the development of the Keystone XL and Dakota Access pipelines as a positive development. "That’s a clear indicator that this administration wants to do more when it comes to bolstering the economy through our energy resources," she told E&E News yesterday.

Murkowski said that she had hoped the White House would be further along in crafting a legislative agenda, although she noted that it’s been less than a month since Trump’s inauguration and neither Interior secretary nominee Ryan Zinke (R-Mont.) nor former Texas Gov. Rick Perry (R), Trump’s pick for Energy, has been confirmed.

She said she spoke with Zinke last weekend about the department’s budget, but without department staff and resources, it’s difficult to turn his ideas into policy.

"What he needs is to put his team in place so he cannot just bounce ideas off Lisa Murkowski but off the folks within his department," she said. "That I think has been frustratingly slow, and that pushes the legislative agenda back a little bit, too."

Still, committees on both sides of the Capitol haven’t been sitting on their hands awaiting guidance from the White House, which did not respond to a request for comment.

New House Energy and Commerce Chairman Greg Walden (R-Ore.) said yesterday that ongoing controversies have not had any impact on his coordinating legislation with the White House.

"It hasn’t affected us in a negative way at all. In fact we have routine regular conversations all the way up to the vice president and his whole team," said Walden, adding that he and his staff have a "very good relationship" with the Trump White House.

Former Energy and Commerce Chairman Fred Upton (R-Mich.) said the confirmation delay has kept him from having a "substantive conversation" with Perry but said the White House knows "that we’re working on infrastructure, cybersecurity, things that really are not partisan issues."

House Natural Resources Chairman Rob Bishop (R-Utah) yesterday declined to highlight his committee agenda, telling reporters that he’s waiting not only for Zinke to be confirmed, but also for former Georgia Gov. Sonny Perdue (R), whom Trump has tapped to lead the Agriculture Department, which houses the Forest Service — which is at the center of wildfire and forest management issues that are a priority for him.

"I’m not ready to announce what our plan is or priorities until the administration is in place," Bishop said. "You need the entire cast that’s in there."

He said he was "fearful" over the slow pace of the Senate confirmation process, adding, "I’m not going to wait forever to get up and running before we start moving, but I want to give them a chance to be in place."