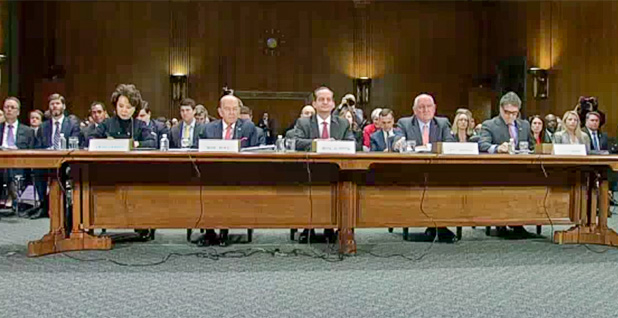 President Trump’s infrastructure plan got a full-throated defense from five Cabinet secretaries yesterday, but lawmakers were left looking for answers about how to pay for it.

It’s become a theme over the past few weeks. Administration officials spread out across Washington, D.C., to hype up the White House plan and hedge when lawmakers ask them about various pay-for proposals.

Perry homed in on the environmental permitting reform elements of Trump’s plan, arguing that lawmakers often take too simplistic a view of pay-for mechanisms.

"Permitting and regulations, I will suggest to you, affect the bottom line even more than taxes do," Perry told the panel.

But it’s not clear Perry did much to convince anyone else, and some lawmakers are growing frustrated about the lack of real policy ideas coming from the White House.

"The challenge is how we’re going to pay for it," said Sen. Gary Peters (D-Mich.). "If we knew how to do that, this thing would have been solved a long time ago, and I have not heard anyone talking about that in a substantive way."

Committee Chairman John Thune (R-S.D.) was more reticent, but he, too, acknowledged that the administration hasn’t provided much help on the pay-for problem.

"There are some other offsets that we could come up with to put together a decent package, but to get the big really robust package the president’s talking about, we have to come up with a significant source of revenues," Thune told reporters after the hearing. "And so far those haven’t been identified."

The administration has a few ideas. Ross suggested yesterday that the pay-for question could have a partial answer in asset recycling, which allows the private sector to buy or lease publicly owned infrastructure.

But the White House still has not officially endorsed a revenue stream. Chao told the panel the administration is "agnostic" to how Congress comes up with revenues, a line she’s repeated in her last few appearances before Congress.

But hiking the gas tax remains unpopular with Republicans. Some lawmakers have suggested that Trump could give skeptical conservatives a reason to favor it by publicly endorsing the idea.

On the Senate side, the Commerce Committee didn’t address the gas tax specifically yesterday, but Thune agreed that the president would have to give lawmakers some kind of political cover to find a revenue solution.

Lawmakers are increasingly doubtful they’ll be able to get infrastructure done this year. And House Speaker Paul Ryan (R-Wis.) said last week that the House might pass a series of bills, rather than one big package, which could make action in the Senate even more difficult.

But Thune said he expects the Senate to move something, even if it’s just an amalgamation of various infrastructure-related bills that Congress has been working on, like Thune’s self-driving car legislation and the Federal Aviation Administration reauthorization bill.

"I think it’s realistic that something could happen that would constitute sort of a down payment on a bigger, more robust bill," he added.

The hearing also featured a pair of heated exchanges between Perry and Republican lawmakers on pipelines and the Yucca Mountain nuclear waste proposal.

Perry told Sen. Cory Gardner (R-Colo.) that he hadn’t studied whether Trump’s tariffs on steel and aluminum would raise the cost of building natural gas pipelines.

"If the issue is if there’s a 25 percent tariff across the board, sure, it’s gonna raise it, but that’s not what this is gonna be in my understanding," Perry said.

Sen. Dean Heller (R-Nev.), meanwhile, wanted to know why the administration included funding in its budget to restart the licensing process for Yucca.

"It is the statutory responsibility for the secretary of Energy to follow the law, and the law tells us that what we’re going to do is to go through with that licensing process," Perry said.

Heller noted that Congress nixed the idea when the White House included a similar request in its budget last year and predicted a similar result this year.