‘Cabinet of big polluters’ or ‘clear-eyed and realistic’? 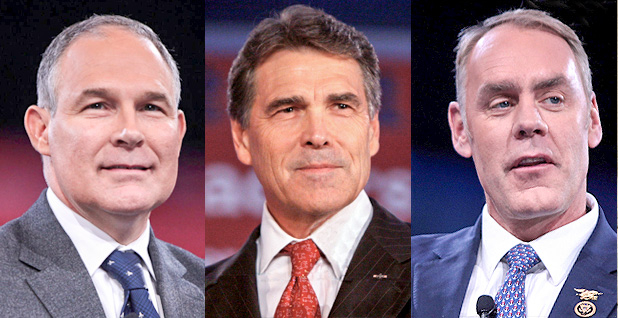 Meet President-elect Donald Trump’s energy and environment Cabinet: a crusader against climate rules, a former governor who’s pledged to ax the agency he’s been picked to lead and an up-and-coming freshman Montana congressman.

Traits they share: They’re all Western politicians, white men and fossil fuel supporters who have expressed skepticism about climate change science. They’ve been ardent critics of the Obama administration’s policies, and they can all expect to face the wrath of the left as they lead the charge to roll back environmental rules and expand domestic energy production.

Their confirmations aren’t certain, and Democrats and environmentalists will certainly mount a fight against the nominees.

"It’s a disaster," said Bill Snape, an attorney at the Center for Biological Diversity, of Trump’s energy team.

Pruitt in particular has attracted fierce opposition, given his role fighting the Obama administration’s signature climate change and water regulations in court. But resistance from the left isn’t likely to thwart these nominees; if the GOP holds its ranks, Republicans have the simple majority they need in the Senate to clear Trump’s picks.

EPA’s administrator isn’t technically a Cabinet position, but it’s been given Cabinet-level status by past presidents and requires Senate confirmation.

Trump’s pick for secretary of State, Rex Tillerson, is also being closely watched in energy and environmental circles, given his tenure as CEO of Exxon Mobil Corp. At the helm of the State Department, Tillerson would play a major role in shaping international climate and energy policies.

Next up, observers will be watching closely to see who the Trump team selects to fill lower-level positions in EPA and the departments of the Interior and Energy. Those undersecretary and assistant administrator jobs can play major roles in shaping Trump’s policies. Nominees for many of those posts will likely roll out early next year.

Greenpeace spokeswoman Cassady Craighill said, "Trump’s energy Cabinet picks share a common denominator — they’ve all paved the way for oil and gas companies to profit off risking the health, safety and future of their constituents."

Meanwhile, energy industry advocates are welcoming a change from the Obama team.

"The selections of Gov. Perry, AG Pruitt and Rep. Zinke represent a positive and much-needed shift in our country’s energy policy," said Chris Warren, vice president of communications at the American Energy Alliance.

"These are three leaders who come from energy-rich states and who recognize that more domestic energy production leads to affordable energy for American families, more jobs for American workers, and an overall stronger economy," Warren said. "This was President-elect Trump’s promise on the campaign trail, and these Cabinet picks show that he is following through on that promise."

Scott Segal, an industry lobbyist at Bracewell LLP, said Trump’s energy team members "each in their own way have a great deal of experience in the subject matter area that they’re being asked to address."

"This team is clear-eyed and realistic," Segal said.

The left has already begun hammering Trump’s team for their views on climate science.

Pruitt co-wrote an op-ed earlier this year in the National Review calling the debate over global warming science "far from settled" and encouraging further debate.

DOE nominee Perry, who previously floated abolishing that department, has also said that "the science is not settled" on climate change and that acting on it would jeopardize the U.S. economy (Climatewire, Dec. 14).

And Zinke, whose nomination has garnered tempered praise from some conservation and outdoors groups, has said that climate change isn’t a hoax but that "it’s not a proven science, either" (Climatewire, Dec. 15).

Segal said those criticisms are too simplistic.

"As is typical, these candidates are not being viewed in three dimensions," Segal said. "The activist community would rather search for not even full sentences — but individual phrases that they can find — as opposed to looking at their records on a whole."

Harbinger of Americans for Prosperity, too, said it’s a "mischaracterization" to dub these nominees climate science deniers.

"When you actually look at some of their policies, they’re actually much more moderate when it comes to action on climate," she said. She expects the Trump administration’s regulatory rollbacks to be based on considerations of costs and regulatory overreach.

A common thread among Trump’s picks, she said, is "a desire to seriously revisit a number of these rules and regulations and try to reduce their impact."