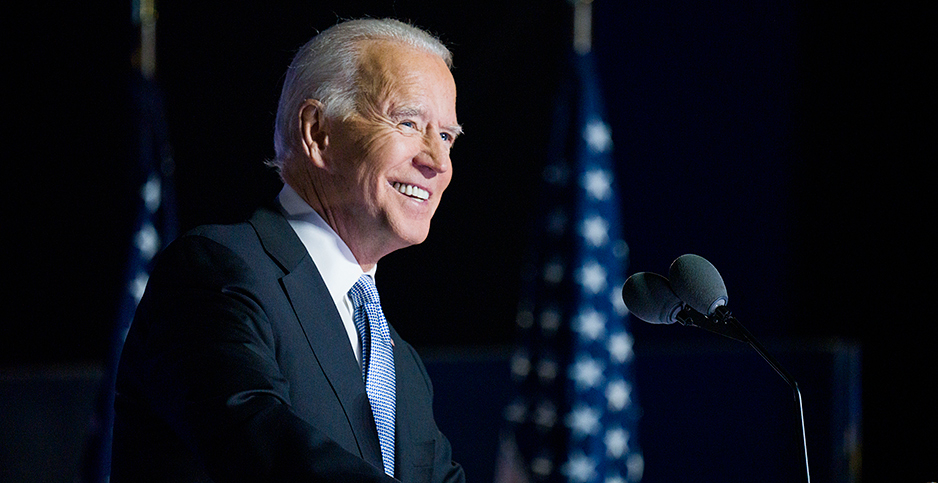 President-elect Joe Biden, pictured on election night 2020, is facing a push from the left as he decides on his energy and environment Cabinet nominees. HO/Newscom

The defeat of a common foe in President Trump has freed up various conservation and Democratic Party factions to resume their familiar intramural struggles — this time over the shaping of the Biden administration’s Cabinet.

And with President-elect Joe Biden now weighing and naming nominees for EPA and the Energy and Interior departments, the tensions are playing out through social media, leaks, public manifestos and the preemptive puncturing of trial balloons.

The tug of war also suggests Biden will need to thread the needle carefully as he looks to move an aggressive climate change and green energy agenda through a potentially Republican-led Senate, amid pressure from a restive left.

"It is absolutely imperative that @JoeBiden keep @ErnestMoniz out of his cabinet, and any of his protégée like Liz Sherwood-Randall," Evan Weber, political director for the youth-driven climate advocacy group Sunrise Movement, tweeted in November.

Groups including Greenpeace, Oil Change International and Friends of the Earth beamed a giant sign onto the Department of Energy’s headquarters last month, with messages that included "Ernest Moniz: Recipe for Climate Disaster" and "Biden: Build a Fossil Fuel Free Administration."

Green groups today applauded Biden’s selection of Granholm and suggested Biden had listened to their complaints by choosing the former Michigan governor, who has opposed pipelines and pushed for renewables to replace fossil fuels.

But they made it clear they will continue to press the administration.

"Granholm has her work cut out for her to prove she can lead the transition to a more just, democratic, clean energy system," Greenpeace USA senior climate campaigner Lisa Ramsden said in a statement that welcomed Granholm’s appointment.

‘Keep the pressure on’

Potential candidates for Interior secretary and EPA administrator, too, have provoked pro-and-con campaigning.

On social media, a #DebforInterior message megaphone has amplified support for Rep. Deb Haaland (D-N.M.) for the top Interior job and also pushed back against anonymously sourced questions about her readiness to lead the department of some 70,000 employees.

"Haaland is at the top of the list, as she should be! Keep the pressure on — tweet @JoeBiden & @Transition46 and tell them to #AppointDeb," the Lakota Law Project tweeted to 50,000 followers on Twitter yesterday.

If selected, Haaland would be the first Native American to serve as Interior secretary, a point stressed by her congressional allies who have been writing letters and making phone calls on her behalf (E&E Daily, Nov. 20).

Democrats hold a roughly 46%-to-28% voter registration advantage over Republicans in Haaland’s current congressional district, undermining the stated fears by some that her appointment and resulting vacancy could weaken House Democrats.

Her allies consider such concerns, as one wrote on Twitter, to be "BS," a polite-sounding pretext that hides baser calculations.

Two other New Mexico Democrats, Sen. Martin Heinrich and retiring Sen. Tom Udall, have also reputedly been in the mix for Interior. In recent weeks, the Udall office has been distributing documents itemizing his achievements during his long public career.

"From New Mexico’s two newest National Monuments, to the historic, bipartisan enactment of full and permanent funding for the Land and Water Conservation Fund, to setting a new national goal of conserving 30 percent of our land and waters by 2030, I’m proud of what we’ve done together," Udall declared.

The floating of another potential candidate, former Deputy Interior Secretary Mike Connor, prompted skeptics to publicly scour his record as a partner in the WilmerHale law firm.

The outgoing chair of the California Air Resources Board helped oversee the state’s climate change law, resulting in reductions of greenhouse gas emissions, and battled with the Trump administration over its weakening of clean car standards.

Having also led EPA’s air office during the Clinton administration, Nichols, 75, is well known in green circles and has been called the most important environmental regulator in the world.

But the race to lead EPA for the incoming Biden administration was upended in recent weeks.

Earlier this month, environmental justice groups signed on to a letter opposing Nichols for head of EPA. The stinging missive said she had a "bleak track record in addressing environmental racism" and took issue with her work at CARB, saying she disregarded recommendations to help low-income communities of color.

Republican opposition to Nichols was expected, but liberal resistance to her nomination was not.

Further, Biden has been facing questions about diversity in his Cabinet, and so far, his most prominent picks for dealing with climate change have been white people.

New contenders have since emerged for Biden’s EPA administrator.

Michael Regan, secretary of the North Carolina Department of Environmental Quality, is being considered for the role and would be the first Black man to lead the agency.

Nichols has since defended her work at CARB and begun to tout her past civil rights activism.

Advocates say they’re judging her not on what she did as a college student but on her record at the California air agency (Climatewire, Dec. 16).