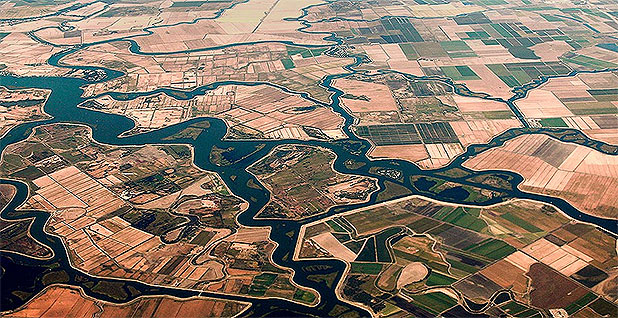 California water agencies yesterday sued the state over endangered species protections they claim threaten their ability to provide water to more than 25 million residents and thousands of acres of farmland.

The lawsuit is an extraordinary step, underscoring that Gov. Gavin Newsom (D) now has multiple crises on his plate: the coronavirus pandemic and a rapidly devolving water war (Greenwire, April 27).

At issue is water shipped from California’s water hub, the Sacramento-San Joaquin River Delta east of San Francisco, south via the State Water Project, a massive system of dams, canals and aqueducts.

California recently issued a new permit for the project under the state’s endangered species law.

The water agencies that get their water from the project — which include the country’s largest water provider — are challenging it in court, saying the terms of the permit would increase their costs by $22 million annually.

Approval of the permit "has left us with no other choice than to file litigation that could and should have been avoided," said Jennifer Pierre, general manager of the State Water Contractors, which represents the project’s customers.

The lawsuit comes amid a flurry of political and legal activity and a standoff between the state and the Interior Department over management of the delta.

Water from the delta is shuttled south via two massive infrastructure projects, the federal Central Valley Project and the State Water Project. For decades, the state and Bureau of Reclamation have successfully coordinated their operations.

President Trump, however, vowed during his 2016 campaign to deliver more water from the delta to Central Valley farmers. And at a campaign-style rally in February, he finalized biological opinions for the delta that would allow the bureau to do so.

California immediately filed a lawsuit seeking to block the opinions from taking effect, sparking criticism from moderate California Democrats on Capitol Hill, as well as praise from more liberal members of the state’s delegation.

Around the same time, the state issued its permit for the State Water Project’s delta operations under state law. Though environmentalists criticized it as not going far enough to save species like salmon and delta smelt, it is considered more restrictive than Trump’s biological opinions.

The lawsuit from the State Water Contractors, which represents 27 public water agencies throughout the state, was filed in state superior court in Fresno. It claims the permit is not rooted in the best available science and contains "pervasive and fundamental errors."

Further, it claims the agencies were not given adequate time to comment on it.

"Such ‘regulation by surprise,’ which impacts water supply reliability for the people of California, is intolerable," the lawsuit states.

Since taking office, the Newsom administration had sought to address the drought-ridden state’s water woes through "voluntary agreements."

The lawsuit and other recent developments seem to indicate such a process is impossible.

The most prominent contractor is the Metropolitan Water District of Southern California, the largest wholesale retail provider in the country.

But, he added, litigation will not solve the state’s water problems, urging the state to take another crack at the permit.

"A lengthy legal battle," he said, "will not produce a sound solution for the delta ecosystem."