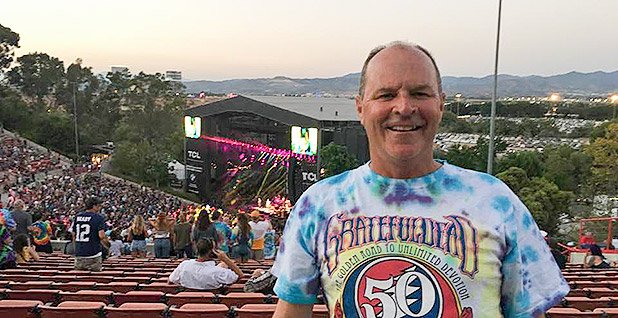 California attorney Michael Stoker at a concert in 2016. He's expected to soon be announced as EPA's Region 9 director. Stoker/Facebook

EPA is slated to announce this week that Republican Michael Stoker will take the helm of the Region 9 office that oversees the Pacific Southwest region, sources told E&E News. It’s the only regional office that hasn’t yet gotten a politically appointed leader under the Trump administration.

Stoker is a former Santa Barbara County supervisor and longtime agriculture attorney. He was nominated by President Trump in January to serve as director of the Federal Mediation and Conciliation Service, but he was never confirmed. Stoker was also reportedly considered for a seat on the National Labor Relations Board under Trump, but the nomination ultimately went to employment law attorney John Ring.

At an annual event in Santa Barbara County on Saturday night, the emcee announced Stoker would be appointed to the Region 9 post this week, multiple sources told E&E News. Stoker is well-known among the several hundred farmers and businesspeople who attended the event, a fundraiser for the Coalition of Labor, Agriculture and Business (COLAB).

"Region 9 administrator is going to be appointed that runs the EPA in the states of Hawaii, California, Arizona and Nevada," said Andy Caldwell, executive director of COLAB. Caldwell told the crowd that the news was "embargoed" until tomorrow, when a press release about the appointment is expected to be sent out, the sources said.

Caldwell continued: "Judge [Timothy] Staffel [of Santa Barbara Superior Court] is here tonight because we were going to have him swear this person in because he is near and dear to our hearts. But Washington delayed us by about three days. I can’t tell you who it is, but I can tell you he was a former county supervisor and he is going to be the Region 9 director for Hawaii, California, Arizona and Nevada. Mike Stoker, does any of that sound right?"

Stoker told E&E News in an interview yesterday that he wouldn’t "confirm or deny" the appointment.

EPA’s press office didn’t respond to a request for comment.

Credited with coining ‘Lock her up’ chant

Stoker has a long history of advising farmers, and he also consulted for the oil industry.

In the mid-2000s, Stoker worked as a spokesman for Greka Oil & Gas Inc. after the company faced intense scrutiny for numerous oil spills. The company settled with Santa Barbara County for $2 million for countless safety code violations. A longtime EPA Superfund employee called Greka "the worst oil company I’ve ever seen," according to the Associated Press.

Stoker was credited for coining the "Lock her up" chant at the 2016 Republican National Convention, referring to Hillary Clinton.

In 2012, he ran for California state senator but lost to liberal Democrat Hannah-Beth Jackson. Stoker served as California deputy secretary of state from 2000 to 2002. Before that, he was chairman of the California Agricultural Labor Relations Board from 1995 to 2000. He was elected county supervisor in 1986 and served two four-year terms.

He’s also a Grateful Dead fan. He posted a photo of himself wearing a tie-dyed shirt ahead of a concert in July 2016. He wrote, "Last week this time I was a CA Republican delegate getting our delegation going. Tonight Irvine Meadows for the Dead. My 82nd show since 1970. Going for the Sandervoters."

If appointed for the Region 9 job, Stoker would take the helm of the office that oversees more than 700 EPA staffers throughout California, Arizona, Hawaii, Nevada, the Pacific Islands and about 150 Native American tribes. The post has been vacant for more than a year — much longer than at any other EPA regional office.

He would also immediately jump into the fray as EPA Administrator Scott Pruitt battles California officials over environmental deregulatory efforts. The Trump EPA is sparring with the state over climate rules for automobiles.

Roger Isom, president of the California Cotton Ginners and Growers Association, was previously rumored to be under consideration for the post. Isom is also head of the Western Agricultural Processors Association, based in Fresno.