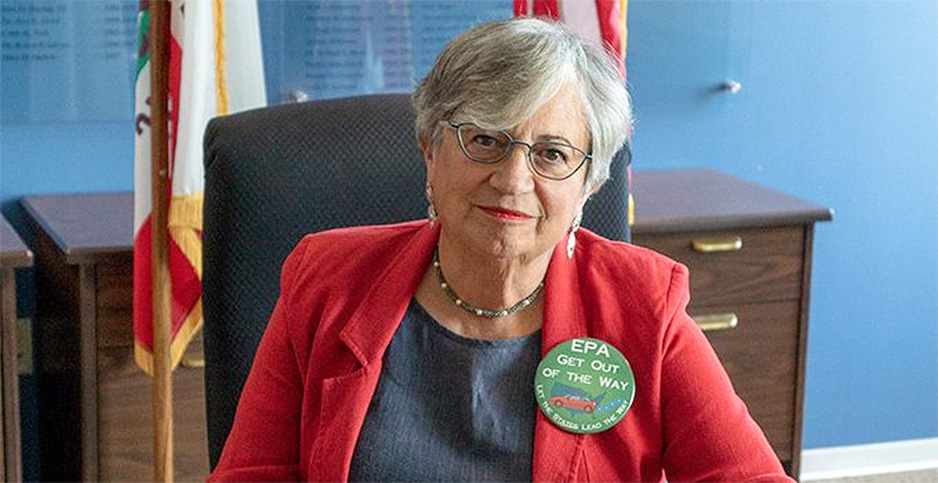 The letter and two others released today — one from House Speaker Nancy Pelosi (D-Calif.) and another from 600 former EPA employees — take aim at the agency’s recent actions regarding the Golden State.

Mary Nichols, chairwoman of the California Air Resources Board, wrote in her sharply worded letter to Wheeler that the EPA chief had made "many inaccuracies and misleading statements" about California’s air quality.

"CARB was established years before U.S. EPA came into existence," she wrote.

"California has been doing its part to protect air quality," she added. "Sadly, U.S. EPA has not done its part."

Nichols was responding to Wheeler’s Sept. 24 letter to CARB, in which he threatened to revoke the state’s highway funds over its alleged failure to comply with the Clean Air Act (Greenwire, Sept. 24).

In particular, Wheeler wrote that California had failed to submit dozens of state implementation plans under the Clean Air Act outlining its compliance with federal ambient air quality standards.

The EPA chief added that the state had "failed to carry out its most basic tasks" under the bedrock environmental law and had "the worst air quality in the United States."

In her response, Nichols pointed out that most of the state’s SIP backlog actually consists of SIPs awaiting action by EPA.

"The SIP backlog discussed in your letter consists of SIPs awaiting action by Regional U.S. EPA staff, and the multi-year delays in acting on California’s SIPs are the result of staff shortages, competing administrative priorities, and a lack of clear guidelines emanating from headquarters bureaucracy," she wrote.

If Wheeler had done his math correctly, she wrote, he would have arrived at 20 areas.

"Your letter incorrectly refers to 82 nonattainment areas in the state, apparently counting a single area repeatedly if it is not in attainment for multiple increasingly stringent standards and pollutants," Nichols wrote.

For example, the greater Los Angeles area was counted as in nonattainment for ozone four times and for particulate matter twice, she wrote. Two tribal areas were also counted six times, even though they fall under the jurisdiction of EPA rather than CARB.

"In fact, California has 20 nonattainment areas in total for ozone and fine particulate matter," Nichols wrote. "We still have much work to do, but there is no point in making the task look harder than it already is."

This is not the first time Nichols and Wheeler have clashed in dramatic fashion.

In June, Wheeler accused the air regulator of negotiating in bad faith over the rollback of Obama-era clean car rules (Greenwire, June 20).

Nichols fired back at those allegations in impassioned testimony before the House Energy and Commerce Committee (E&E Daily, June 21).

Asked for comment on the letter, EPA spokesman Michael Abboud said in an email: "California has the worst air quality in the nation along with other serious environmental problems. California’s total portion of the SIP backlog is more than 127 with many dating back decades. Most of these SIPs are inactive and appear to have fundamental issues related to approvability."

In a letter to the House Oversight and Government Reform Committee that was organized by the Environmental Integrity Project, the former employees asked for a hearing and probe into EPA’s recent enforcement threats against the Golden State.

"We write as former employees of the Environmental Protection Agency to respectfully request that your Committee investigate whether EPA Administrator Wheeler’s recent actions in California were intended as retaliation for the state’s failure to support President Trump’s political agenda," they wrote.

"EPA’s credibility depends on its commitment to use its authority to protect public health and our environment in an objective, even-handed manner, rather than as a blunt instrument of political power," they added. "While that principle has served the public well under both Republican and Democratic Presidents, it is in serious trouble today."

The former employees also noted that at least six other states — Ohio, New York, Iowa, Missouri, Texas and Indiana — have had more major pollution sources in noncompliance with environmental laws over the last three years than California.

The Trump EPA has indeed taken a slew of recent steps to sanction California or curtail its authority.

EPA and the Department of Transportation have also proposed preempting California from setting tougher vehicle emissions standards than the federal government (Greenwire, Sept. 18).

Abboud, the EPA spokesman, also pushed back on the letter from former employees.

"Highlighting that California has the worst air quality in the nation along with other serious environmental problems is not a political issue," Abboud said in an email.

"The Trump Administration, unlike the previous administration, will act to protect public health and the environment for all Americans," he said.

In a letter to acting EPA Inspector General Charles Sheehan, Pelosi requested "an investigation into whether our nation’s water quality laws are being properly enforced and if there has been irregular interference by administration officials to single out the city and county of San Francisco and the state of California."