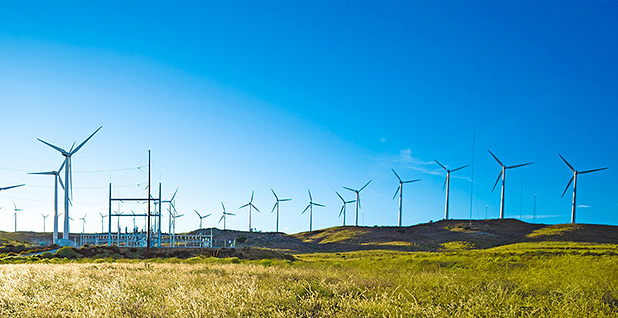 California utilities must vastly expand wind and solar power, and battery storage, to keep the state on course to meet stringent carbon reduction targets in 2030 and 2045, the state’s power regulator has ordered.

The California Public Utilities Commission on Thursday approved a plan that requires a 30% increase in wind generation, more than a doubling of solar energy and a tripling of battery storage capacity in the coming decade, in order to push CO2 emissions from the electricity sector down to 46 million metric tons (MMT) by 2030, or nearly 40% below 1990 levels.

The CPUC order directs the state’s investor-owned utilities, cooperatives and other power providers to submit plans by Sept. 1 for meeting their proportional shares of the 2030 target — a starting point for the state’s low-carbon aims.

To reach the 2030 goal, economywide CO2 emissions would have to be cut from 429 MMT to under 260 MMT. The electric sector’s target of 46 MMT must be matched by a similar cut by industry and an even larger one in transportation — cars, trucks, airlines, rail and shipping — according to an analysis presented to the commission by the Energy Futures Initiative.

"No major economy is on a trajectory to achieve similar goals," EFI said. "California’s policy and programmatic successes — or failures — will be widely observed, creating models for replication or avoidance, depending on their outcomes."

During months of debate before the commission, environmental and consumer groups and utilities argued over how deep CO2 emissions cuts from the electricity sector must be to hit the 2045 goals.

In the end, the commission Thursday sided with a majority of the energy-sector groups, saying the target of 46 MMT "already represents a challenging portfolio to develop in less than a decade."

It "maintains the trajectory" for meeting the 2045 goal of obtaining 100% of electricity from renewable energy, the commission said, cautioning that that target "will likely become harder for the electric sector to achieve" if the state moves faster in switching to battery electric vehicles and electric heating of businesses and residences.

But the state regulator extended a compromise to environmental organizations by requiring the utilities to submit a second plan for how they would meet a target of 38 MMT. The commission said it would review the plans within two years to see if the 2030 goal needed to be tightened.

The Sierra Club protested the decision. "We must go beyond business as usual, and act with the urgency that is necessary to adequately tackle the climate crisis," Sierra Club campaign representative Luis Amezcua said in a statement.

The Natural Resources Defense Council objected, as well, saying the decision went against views of "the entire environmental community, multiple electricity providers, and even the CPUC’s own Public Advocates Office. Fortunately, however, it leaves the door open for an alternative course that would get the state much closer to where it needs to be."

The CPUC kept open a future for existing natural gas generation in the state, saying it is needed to balance rising volumes of wind and solar power, and particularly for meeting an increasing ramp-up in power demand beginning late in afternoons as large amounts of solar power drop sharply. But it granted environmental groups’ call for a ban on new gas turbine generation. Expansion of existing gas facilities requires showing overall emissions benefits.

The decision acknowledges that a crucial part of carbon reduction goals lies outside California’s borders, given the amount of electricity imported by the state. The commission warned that California likely faces tougher competition for zero-carbon wind, hydro and solar power from neighboring states and called on the California Independent System Operator to use the new carbon goals as a benchmark for considering new transmission line proposals to reach out-of-state power generation.

California achieved dramatic increases in solar and wind power in the past decade, raising them from 3% of the state’s generation mix to 18%. To push that pace even faster, state officials have fixed targets for an electricity sector undergoing disruptive changes in technology, energy prices, customer choice and political pressures.

Meanwhile, a pattern of devastating seasonal wildfires has created a "new normal" of threats to power companies, particularly Pacific Gas and Electric Co., the state’s largest investor-owned utility, which is facing a June 30 deadline to win approval of a bankruptcy plan that it needed to reestablish its financial solvency. PG&E filed for bankruptcy protection last year as it faced $30 billion in liabilities stemming from its equipment sparking wildfires.

Rather than helping California meet climate goals, the federal government under President Trump wants to take away the state’s tighter restrictions on vehicles’ gasoline emissions — a crucial part of its greenhouse gas strategy.

EFI and other analysts have concluded that the 2030 goal can be achieved with current technologies, but a separate 2050 target for 80% reductions in economywide greenhouse gas emissions requires breakthroughs in a range of difficult areas, from storage batteries to direct air capture of CO2 and development of hydrogen and biomethane fuels.

The 46-MMT target is a significantly easier lift compared with current CO2 emissions from the electricity sector, which have dropped to around 69 MMT versus 111 MMT in 1990 because of energy efficiency, the advance of zero-carbon wind and solar resources and the heavy hit the state’s economy took in the Great Recession, EFI said.

The CPUC said the 46-MMT target balances cuts in greenhouse gas emissions while maintaining the power grid’s reliability and affordable power for customers.

A California Energy Commission report in 2018 called the cost of transforming the state to a low-carbon economy "relatively small," as fuel savings would help offset investment costs.

"The upfront capital cost investment, however, is still significant, and is spread across both businesses and households," the commission’s report said. "A key challenge is convincing millions of households and businesses to adopt these technologies and become the drivers of change to a low-carbon economy."

The CPUC order defended computer modeling of the state’s grid that it relied on to find the best mix of resources to achieve climate goals.

But it noted that about half of the many parties in its hearings were not comfortable with the model. The CPUC said the complaints spanned concerns "that the model is too sensitive, not sensitive enough, too simple, and too complex."