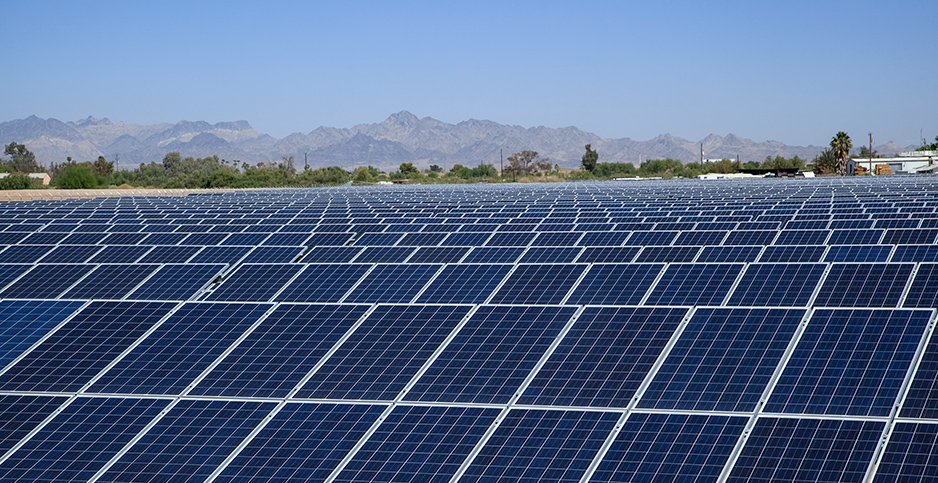 Solar panels near Blythe, Calif., are shown in this January 2019 file photo. California is facing possible blackouts as a heat wave has pushed the regional power grid to the brink. Timothy Hearsum/Newscom

"These blackouts, which occurred without prior warning or enough time for preparation, are unacceptable and unbefitting of the nation’s largest and most innovative state," Newsom wrote in a letter to the agencies that regulate the power sector. "This cannot stand."

This week, California was hit again from the opposite end of the political spectrum in taunting tweets from President Trump in the middle of the Democratic National Convention.

"In California, Democrats have intentionally implemented rolling blackouts — forcing Americans in the dark," Trump tweeted. "Democrats are unable to keep up with energy demand."

But the blackouts were something else.

"Obviously, this was a wake-up call" revealing the grid’s vulnerability, said Ralph Cavanagh, co-director of the Natural Resources Defense Council’s climate and clean energy program, a green energy advocate who has been immersed in the state’s grid issues for two decades, in an interview.

The California outages triggered the kind of political outrage that could bog down other states and Democratic presidential nominee Joe Biden, who is calling for higher levels of renewables and low-carbon energy than California’s goals.

This week revealed again the divisions within the Biden camp over how to deliver on his climate agenda (E&E Daily, Aug. 19). The Golden State’s goal is to achieve a zero-carbon emissions grid by 2045. Biden’s plan would get to that point nationwide in 2035.

Over the weekend, some 700,000 customers in scattered neighborhoods in a state with nearly 40 million residents lost power for 60 to 90 minutes. The cuts were to help endure an extreme regionwide heat blast that prevented California from importing power from neighboring states grappling with their own scorching weather. When energy imports weren’t enough this time, rolling blackouts were used to maintain the grid’s critical supply-demand balance.

"We need first to understand exactly what happened and to appreciate how much worse it could have been, even as we work urgently to address the underlying problems and continue a clean energy transition in which reliability is a cornerstone," Cavanagh said in a blog post Tuesday, urging the state to "double down on the clean energy solutions that address that crisis head-on, by cutting the carbon pollution emissions at the heart of the problem."

When the lights went dim in California, the most common response was to "look for a convenient villain," he said.

Fossil fuel groups and some Republican lawmakers found one in California’s solar-rich generation mix that has left the grid with a growing supply deficit to make up at sundown.

But California’s clean energy strategy has been extensively modeled and studied, and many experts agree that very high levels of renewable energy are possible.

The Energy Department’s National Renewable Energy Laboratory concluded in a recent study that a "large body of recent renewable grid integration research has resulted in a remarkably consistent key conclusion: integrating high shares of wind power is technically achievable but will require changes to operating practices."

Criticisms like Trump’s also miss the purpose of the rolling outages, a high-level official of a grid operations organization in the western United States explained in an interview. The official was not willing to be quoted on the record.

The limited rolling blackouts are part of a carefully scripted response by utilities and the California Independent System Operator (CAISO), and did what they were designed to do — act as an emergency safety valve in California’s long, hard climb toward carbon-free electricity, the official said. The decisions were ordered by professional grid officials, not by "Democrats," as Trump painted it.

"Electric systems in the U.S. aren’t planned to assure rolling outages will never happen," the official said. Covering every possible contingency would skyrocket customer bills, so operators calculate the odds of outages and try to ensure that shortages are extraordinarily rare and brief.

"The situation has not yet proven to be significantly consequential," the official added.

Outages should never be more than a last resort, Cavanagh and other experts agreed.

Wade Schauer, Americas research director at Wood Mackenzie Power & Renewables, noted that California has shut down about 5,000 megawatts of gas-fired power plants without adequate replacements. Even though state officials extended operations in the past year of some gas units to keep them on hand for emergencies, grid operators admitted this week that they were caught off guard by the regionwide heat wave.

In hindsight, the state could have built more battery storage, at a faster pace, or built more power plants, or installed equipment to connect customers’ rooftop solar panels into the grid. California regulators have signed off on many large battery storage projects, some of which are slated to come online later this year, but experts say larger amounts should come online to match high levels of renewables. "This got ahead of them," the grid official said.

"What’s going on now is hard. We’re in this time of transition to a much lower-carbon future," the official added. "Some people say there is a need to build more gas-fired power plants in California. Others say deploy storage more rapidly. This event will definitely affect all those conversations."

Stephen Berberich, president of CAISO, the state’s grid manager, put the planning failure bluntly: "We thought there would be adequate power to supply the demand. We were wrong," he said.

Berberich pointed out that CAISO had repeatedly warned the state’s regulator, the California Public Utilities Commission, of the threat of power shortages. But the CPUC had not taken adequate action to ensure that enough generation, power storage and demand-side energy conservation programs was ready, he said.

While studies show high levels of renewables are feasible, particularly with more storage, the changes in operations will need to be enormous, experts say. "The scale of the challenge is unprecedented, requiring an upending of fossil fuel industries and a complete redesign of the power sector," a 2019 Wood Mackenzie report concluded.

The risks of "getting it wrong," in Berberich’s words, could increase as U.S. electricity infrastructure continues its transformation, unless there is close collaboration around ways and means.