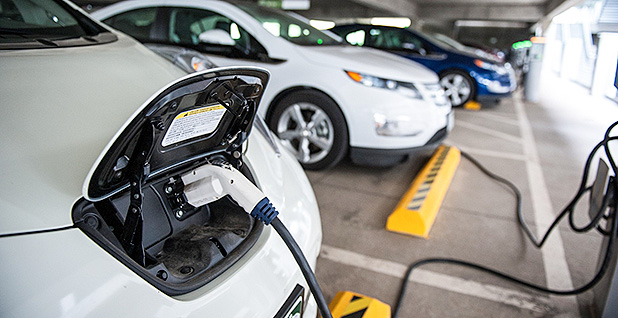 The California Air Resources Board has been overseeing Electrify America's expansion plans for electric vehicle charging infrastructure in the state. Department of Energy

The California Air Resources Board yesterday gave the green light to a plan by a Volkswagen AG subsidiary, Electrify America, to spend $200 million on charging infrastructure for electric vehicles.

The funding springs from VW’s diesel-emissions cheating scandal. The automaker formed Electrify America in 2017 to spend $2 billion over a decade to support zero-emissions vehicles, a part of a nearly $16 billion settlement overseen by California and federal officials.

The vote, though nearly unanimous, did have some controversy.

Dean Florez, a board member and former majority leader in the state Senate, voted "no" after penning an op-ed in The Sacramento Bee objecting to the plan’s scant plans for rural roads.

Of the $2 billion settlement, $1.2 billion is meant to be used across the country and is overseen by EPA, while $800 million is targeted at California. CARB, which uncovered VW’s wrongdoing, is in charge of the state’s enforcement.

The blueprint calls for Electrify America to devote as much as $115 million to building chargers in metropolitan areas; up to $30 million on highway routes; and up to $24 million on pilot projects, including building chargers for homes, buses and autonomous cars and in rural areas. A further $17 million is meant to promote the driving of EVs and $10 million to drive customers to Electrify America’s stations (Energywire, Oct. 5).

The $200 million of funding considered Tuesday covers the second of four spending cycles, governing the company’s plans from mid-2019 to the end of 2021.

Dozens of speakers voiced support for Electrify America’s plan and the infusion of money it brings to California, where charging stations are required to keep pace with Democratic Gov. Jerry Brown’s plan to have 5 million EVs on the road by 2030.

Objections came from a couple of Electrify America’s commercial competitors, which have accused the VW arm of preying on their sites, contrary to the spirit of the settlement (Energywire, Nov. 5).

Others, including hydrogen-fueling advocacy groups and a representative from automaker Toyota Motor Corp., criticized Electrify America’s lack of funding for hydrogen stations. Electrify America, in addition to being brand-neutral, is required to consider both hydrogen and electricity as fuels.

Board members, while curious about the lack of funding for hydrogen, voted "aye" anyway.

"Can the plan be better? Absolutely. But this is the plan before us," said Eduardo Garcia, a nonvoting member of the board and a Democratic state assemblyman whose district, in Riverside and Imperial counties, will receive charging infrastructure under the plan.