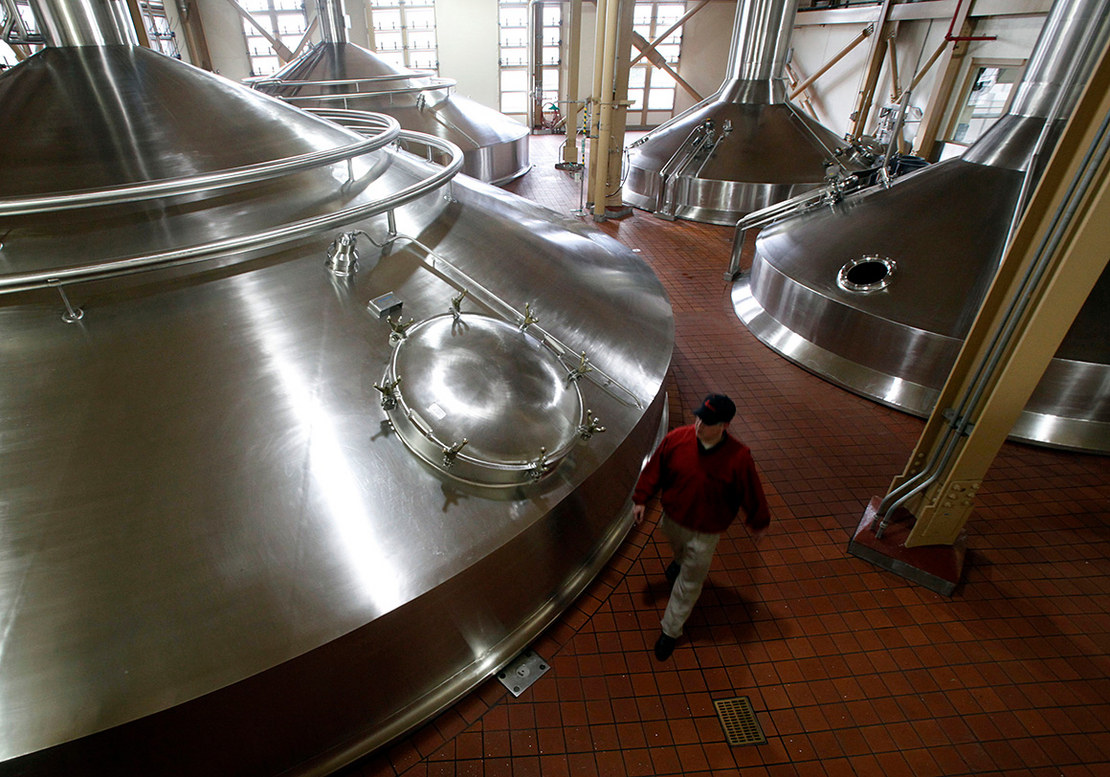 Brewmaster Brian Sullivan walks through the Anheuser-Busch brewery in Los Angeles in 2011. The company plans to use $5.8 million from the state to design and install a microgrid system at the brewery. AP Photo/Reed Saxon, File

This is the first story in an occasional series examining the state’s use of cap-and-trade revenue.

PepsiCo Inc., Anheuser-Busch Cos., Saputo Cheese USA Inc., E&J Gallo Winery, Sun-Maid, Foster Farms, Frito-Lay Inc. and the Campbell Soup Co. are among the companies that have received funds to upgrade their facilities and factories. The dollars flow through the Food Production Investment Program, which offers California food producers revenues from cap-and-trade auctions to upgrade their equipment or add energy-efficient technologies.

The aim is to cut greenhouse gas emissions from food production. And while such corporations are perhaps not the ideal “poster child” for a cap-and-trade revenue recipient, they likely do deliver emission reductions, said Ethan Elkind, a climate research fellow at the University of California, Berkeley’s School of Law.

“If these are really high energy-intensive pieces of equipment with a pretty big carbon footprint and a little bit of money from the state can give an incentive to these companies to swap them out … arguably that’s a good investment,” he said. Other methods — such as requiring companies to cut their emissions — could also work, he said, but come with their own political obstacles and price tags.

California’s cap-and-trade market just hit its ninth year. The program auctions “allowances” that large businesses must buy to offset each metric ton of carbon they produce. Revenues from the auctions have provided $10.5 billion to California climate-related projects since the market started in 2013, according to the most recent annual report to the state Legislature.

California is the largest food-producing state in the United States, generating a fifth of the country’s dairy products, about one-third of its vegetables, and two-thirds of its fruits and nuts, according to the California Department of Food and Agriculture.

Food and beverage production generates less than 5 percent of the industrial sector’s emissions, which in turn comprise about a quarter of California’s total carbon pollution. Despite not being the largest emitter in the sector, it’s still important, according to the California Air Resources Board, which runs the cap-and-trade program.

“Reducing GHG emissions to address climate change requires everyone to take action, including community members, organizations, local and regional governments, private businesses, and many others,” Melanie Turner, CARB spokesperson, said in an email. “Programs funded by cap-and-trade auction proceeds, including programs that partner with the private sector, deliver economic, environmental, and public health benefits for Californians, including meaningful benefits to the most disadvantaged communities and low‑income communities and households.”

The Food Production Investment Program, one of several portals for distributing cap-and-trade funds, came out of a political handshake. In 2017, then-Gov. Jerry Brown (D) wanted the Legislature to extend the cap-and-trade market from 2020 to 2030 — a feat that required a two-thirds vote. That meant blunting business opposition.

Launching the program helped gain industry support, according to a blog posting from the Agricultural Council of California.

“Ag Council and others successfully advocated for the creation of this grant program during negotiations to extend the cap-and-trade program in 2017,” the trade group wrote in a 2018 blog post. It’s “a first of its kind grant program for food processors to utilize funds” to install technologies to reduce GHGs.

Sean Lee, general manager at the Jessie Lord Bakery, a pie-maker in suburban Los Angeles County, said his company wasn’t thinking about its GHG emissions when it looked at buying a new refrigeration system. Then a vendor mentioned the company might be eligible for a cap-and-trade revenue grant.

“Would we have gone with this natural refrigerant [system] … if we hadn’t gotten these funds?” Lee said in an interview. “There were cheaper options out there that were not a switch to ammonia. It was a switch to a different Freon, which wouldn’t be as good for the environment, wouldn’t be as good from a utility standpoint, energy savings standpoint and efficiency. But it would have been cheaper in terms of upfront capital cost.”

The Food Production Investment Program launched in 2018 with $117.8 million in grant funding. Because companies are reimbursed after submitting receipts, money has been flowing out over the past four years.

There’s a push to extend it. Gov. Gavin Newsom (D) proposed injecting another $85 million into the fund in his draft for the fiscal 2022 budget.

Numerous companies have taken advantage of the Food Production Investment Program to upgrade their California facilities: