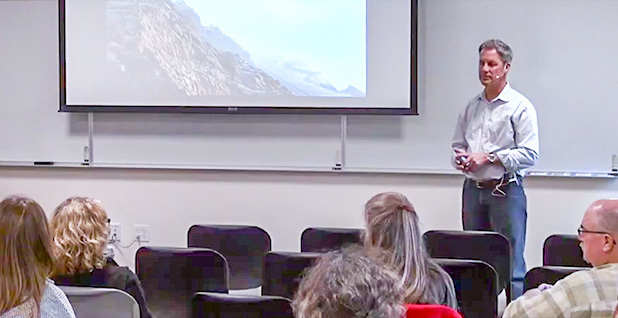 DEL MAR, Calif. — On a sunny weekday morning, Dr. Bruce Bekkar stood on the beach in this north San Diego County town and gestured to a dark line in the sand where high tide typically lands.

Clad in khaki shorts, a blue T-shirt and flip-flops, Bekkar, 61, then turned and walked 30 feet away from the water, off the end of the sand, down a beach access path and past the front of multimillion-dollar homes.

This is where the tide will hit, he said, with 1 foot of sea-level rise.

Most people who live in this exclusive beachfront community — with a median house price of about $1.5 million — don’t understand that effect, he said. Scientists, when they talk about sea-level rise, refer to it in terms of vertical feet. But when that water flows out on the sand, it can mean far more than that amount. In Del Mar, because of the beach’s slope, consultants to the city have said 1 foot of vertical rise equals 30 feet or more of water flowing horizontally.

At this popular spot known as Beach Colony, which sits slightly uphill from the surrounding homes, it means water running from the ocean into the streets, Bekkar said.

"It’s going to flood all of that for blocks," he said, pointing toward houses and the downtown beach shops. "All along [Pacific] Coast Highway, all the way to the fairgrounds. That’s why we need to shake people and make them understand."

It’s among the reasons Bekkar in 2013 left his practice as a gynecologist and obstetrician to work full time on climate change. He’s vice chairman of Del Mar’s sea-level rise committee, advises a city of San Diego committee on climate-related health issues and urges nearby cities to take actions that can limit warming.

"As a physician, I think about nature as a patient, and I understand it," Bekkar said. "Nature is in the critical care unit."

With human patients, he said, there is a point where someone has "passed that invisible line and there’s no getting them back." Because of that, "you don’t let them get too close to that line. You may not get them back."

With nature, he said, "We shouldn’t be taking that chance. That’s why I left my practice 2 ½ years ago. This is a global emergency."

‘The End of the World’

Bekkar’s transition started in 2005, when he came home from work one day and in the mail found a newsletter from the University of California, San Diego, the school where he earned his undergraduate degree. In it was an article with the headline "It’s the End of the World as We Know It."

Borrowing its title from the 1987 REM song, it talked about the effects of climate change, the research underway at San Diego’s Scripps Institution of Oceanography, "and how it was becoming increasingly apparent that we needed an unprecedented response or else we would have a disaster beyond our imaginings," Bekkar said.

"Once I read that article, I went out and traded in my BMW and got a Prius, got solar panels for my house," and joined Del Mar’s Sustainability Advisory Board, eventually becoming chairman. "And I kept waiting for the world to come around, for this country to come around and arrive at that same conclusions I had."

He said he ultimately "felt guilty continuing to collect my big, fat salary and only spending 20 percent of time on the climate crisis."

“Once I read that article, I went out and traded in my BMW and got a Prius, got solar panels for my house.”

He wound down his doctor’s practice. Last year, he spent his own money to travel to Cedar Rapids, Iowa, where he took Al Gore’s Climate Reality training course, which provides information on the most recent global warming science. This month, he will go to Houston and work as a mentor for the program at another of its sessions.

"I’m passionate about climate change and felt like the education could be valuable," Bekkar said.

Don Mosier, a Del Mar city councilman, has gone with Bekkar to talk to residents at workshops on sea-level rise, and on the city’s development of a climate action plan (CAP), which was approved last month (ClimateWire, Aug. 8). He said Bekkar knows how to approach the issues to make them resonate.

While residents might know that greenhouse gas emissions are increasing, Mosier said, most people don’t relate to it in a way "that says we have to do something now."

"Bruce has helped focus that conversation on things that are happening right now," such as health impacts and economic costs.

For example, Mosier said, in terms of the impacts of burning fossil fuels, Bekkar talks about how children who live within 500 yards of a freeway are four times more likely to have asthma.

Bekkar said for the most part, he meets few critics. During a talk last year at a local naturopathic medical school, one man in the audience questioned whether there "isn’t still a lot of uncertainty about all of this," Bekkar said.

Bekkar said he agreed that "we always have some uncertainty when we talk about science. In this case, however, there is worldwide agreement on the need to act. And, if anything, scientists tend to be too conservative, and so the risks are probably greater than they’re telling us."

In Del Mar and other places, Bekkar is talking about what increases in heat mean for people.

"Increased heat waves lead to hospitalizations and deaths," Bekkar said. "Every day that’s 10 degrees warmer leads to a 5 percent increase in hospitalizations" and an equal number of deaths. Those extreme heat days are expected to increase five- to tenfold in the next 40 years.

"It’s also the changing pattern of infectious diseases," including West Nile virus and now the appearance of the Zika virus, Bekkar said.

He appeared in June at a meeting of Del Mar’s City Council, as it voted to switch to 100 percent renewable energy as part of the CAP. Working as a surgeon, Bekkar told the council, he learned early in training that "delay can be deadly."

"Pass this climate action plan tonight and do it unanimously," Bekkar said. "Then get busy" with switching to renewable energy. "Lives are truly dependent on how you vote tonight."

Bekkar played an important role in the development of Del Mar’s CAP, Mosier said. Bekkar was chairman of the city’s Sustainability Advisory Board when it worked on getting the city’s greenhouse gas inventory, one of the first steps toward developing the climate plan.

Now on Del Mar’s sea-level rise committee, Bekkar is one of those pushing to keep it in service longer than originally planned. It was supposed to oversee a study for the California Coastal Commission, which will help the city revise its local coastal plan. It affects development. The doctor’s arguing there’s more to find out about sea-level rise impacts.

"We feel we owe it to the city to stay together and keep grappling with this long term," Bekkar said. "Trying to adapt is an incredibly difficult thing to do, even in one location. There are 88,000 miles of coastline in the U.S. They’re all going to have problems. We don’t know how to do it yet."

Love affair with the beach

Bekkar grew up in Los Angeles, where his parents often took the family to the beach, "so it became our default vacation."

After high school, he went to UC San Diego, located in La Jolla. About a month after school started, he went on a date with a woman who lived in Del Mar. They went to the beach.

"I fell madly in love that day," Bekkar said. "Not with her, but with this town, the beauty of the town. The sunsets are big and beautiful. It’s poetry in the sky."

The fact that the beach in Del Mar could be gone in 20 years, he said, "that absolutely breaks my heart, that knowledge."

Sea-level rise hasn’t happened to a great extent in Southern California because of ocean temperatures, Bekkar said. Until last fall, the West Coast had a cooler-than-average ocean current, which was obvious to surfers like him, he said.

Water expansion occurs when temperatures are warmer. That’s why Miami has seen flooding in its streets. But the tides are changing in Southern California, he said.

"Everyone notices that the tides are coming in further that everyone expects them to," Bekkar said. He said that Scripps, located a few miles south in La Jolla, has been measuring tides "at least a half-foot higher than expected."

In addition to Del Mar, Bekkar is also talking to San Diego about its climate action plan, adopted late last year (ClimateWire, April 8). The city has an implementation working group that’s advising lawmakers on how to implement the blueprint.

For example, changing delivery trucks in certain parts of town from diesel to electric will create a health benefit for children in that part of town.

He’s also talked with other local city councils, including that of Oceanside, at the northern border of San Diego County.

"He was a driver of change in Del Mar, for sure. That’s where he lives," Nicole Capretz, executive director of the Climate Action Campaign, a nonprofit watchdog group, said of Bekkar. "He’s just kind of getting his sea legs to work in other communities."

On the issue of climate and public health, "he’s a trusted messenger, a person of authority," Capretz said. "I’m always looking for new ways to integrate him into my advocacy effort."