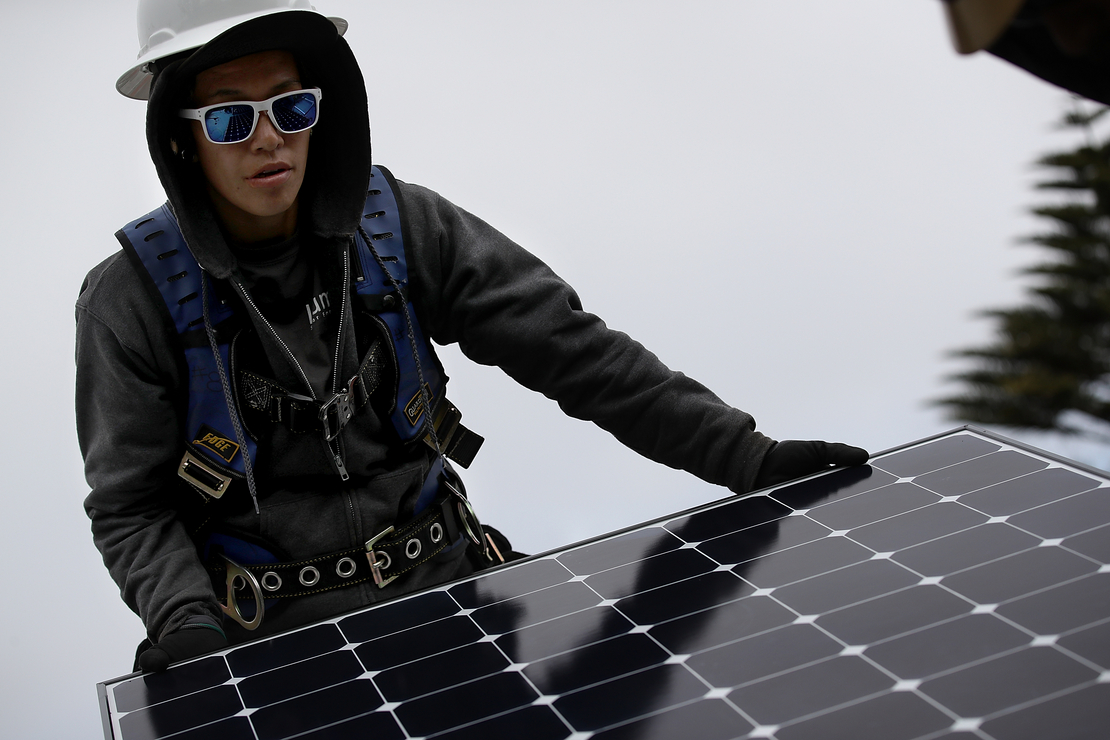 A worker moves a solar panel during the installation process on the roof of a home in San Francisco in 2018. Justin Sullivan/Getty Images

California regulators scaled back a controversial plan Thursday that would have charged rooftop solar customers a monthly fee, but renewable advocates said the state’s revised net metering rules could still create a significant barrier for the growing industry.

The California Public Utilities Commission unveiled the updated proposal for the state’s solar incentive program after a previous version was withdrawn earlier this year amid widespread criticism.

State officials said the new plan written by administrative law Judge Kelly A. Hymes could save solar customers upwards of $100 a month on their electricity bills while also incentivizing them to buy energy storage batteries. Overall, the proposal says, the changes “will help meet California’s climate goals and increase reliability, while promoting affordability across all income levels.”

The plan would overhaul the state’s current net metering incentives, which offers users financial credit on their bills in exchange for returning power generated from rooftop solar panels back to the grid. The plan’s new tariffs would replace the payments — pegged to the retail electricity rate — with a more dynamic tariff that changes based on the electricity system’s needs at that time.

For example, rates would be higher during periods of peak demand on the grid — especially in the evenings, when the state’s renewable-power generation usually gives way to more fossil fuel-based sources. That structure would benefit storage owners, who can charge batteries during the day and dispatch the power at peak times.

Notably, the rules dropped a controversial monthly grid-connection fee that solar power executives and clean energy groups said would amount to a tax on solar.

In a statement, Sunrun CEO Mary Powell said it was an “important move in the right direction” that customers “will not be unduly penalized for generating and storing [in batteries] local clean energy to both participate in modern ways to power their lives and contribute to the fight against climate change.”

The proposal is scheduled to be voted on during the CPUC’s Dec. 15 meeting. The commission will also take public comment in a special hearing Wednesday.

But other solar advocacy groups said that some aspects of the proposal would still make new solar projects uneconomical for many customers. By using the “avoided cost” metric that pegs export rates to grid conditions, advocates said the overall compensation for customers would be significantly reduced from the current incentives.

An assessment of the proposal by Rob Rains, senior vice president of Washington Analysis, said the tariff changes are an improvement over the previous proposal but “are still an overall negative to the rooftop solar space.” That’s in part because the compensation is scheduled to phase down over time for new customers.

“The CPUC’s new proposed decision would really hurt. It needs more work or it will replace the solar tax with a steep solar decline,” said Bernadette Del Chiaro, executive director of the California Solar & Storage Association, in a statement. “If passed as is, the CPUC’s proposal would protect utility monopolies and boost their profits, while making solar less affordable and delaying the goal of 100 percent clean energy.”

Existing solar customers would not be affected by the new tariff for 20 years, another change from the previous proposal.

A coalition representing California’s largest utilities also criticized the proposal, saying it would continue to favor wealthy homeowners by spreading solar costs among all customers. Affordable Clean Energy for All — which also represents chambers of commerce, labor unions and housing groups — has advocated for reducing incentives to solar customers, which it says unfairly puts the shared costs of grid upgrades on customers who cannot afford solar power.

“It is extremely disappointing that under this proposal, low-income families and all customers without solar will continue to pay a hidden tax on their electricity bills to subsidize rooftop solar for mostly wealthier Californians,” said Affordable Clean Energy for All spokesperson Kathy Fairbanks. “The failure to finally eliminate the growing cost burden carried by nonsolar customers in California is particularly troublesome given the billions of dollars in new federal clean energy subsidies that will ensure continued growth and healthy profits for large solar corporations for the next decade.”

The utility and business alliance had previously argued that federal tax benefits included in the Inflation Reduction Act would create enough support for the industry that state-level subsidies could be reduced (Energywire, Aug. 26)

Net metering rules adopted by California 20 years ago have helped the state’s rooftop solar market boom, with 12 gigawatts of clean distributed energy installed since then, according to the CPUC.

However, officials have said that the existing rules are outdated and do not reflect current grid conditions and needs, necessitating the update.

An analysis from Wood Mackenzie estimated the original December proposal could have cut demand for new residential solar in the state in half by 2024. Those rules were withdrawn in January.

The new tariffs will be open to changes ahead of the scheduled vote.

Correction: A previous version of this story incorrectly identified how long existing solar customers would not be affected by the new tariff.