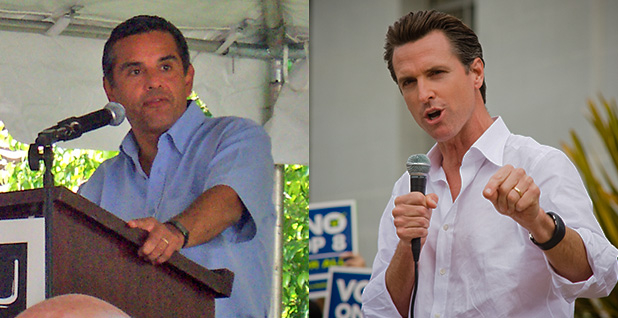 California environmentalists have a wealth of riches to choose from in this year’s gubernatorial race.

The top four Democratic candidates for governor are all positioning themselves as stronger on the environment and climate issues than Gov. Jerry Brown (D), who is termed out.

Lt. Gov. Gavin Newsom and former Los Angeles Mayor Antonio Villaraigosa are the front-runners, according to polls, and are presumed to be in good position going into June’s "jungle" primary, which sends the top two vote-getters to the general election, regardless of party affiliation.

As former mayors of San Francisco and Los Angeles, respectively, they are counting on picking up significant geographic blocs but are also highlighting their environmental credentials.

Behind them are state Treasurer John Chiang and former state Superintendent of Public Instruction Delaine Eastin, both of whom also stress their commitment to environmental protection and climate change.

Chiang is a proponent of green bonds, while Eastin advocates improving education and training to fill the low-carbon technology jobs of the future.

"It’s almost an embarrassment of riches when it comes to the level of understanding about the environment, and the fact that we probably are going to have two people running for governor who are very good on the environment and the issues are going to be more nuanced," said Kathryn Phillips, director of Sierra Club California.

All four say they’ll ban hydraulic fracturing or, at a minimum, study the issue. At least three say the state’s cap-and-trade program for greenhouse gases isn’t ideal because it allows facilities to emit conventional pollutants. Three also support setting a 100 percent renewable electricity target for the state’s utilities by 2045.

All four have signed a pledge to refuse campaign donations from oil companies. And at least three are skeptical of Brown’s plan to extend the life of the state’s massive water delivery system by building tunnels underneath.

But with such a deep bench, environmentalists involved in the party nomination process are taking their time making their choices. None has announced endorsements yet, and some groups may wait until after the June 5 primary.

None of the candidates reached the 60 percent threshold for an endorsement from the state Democratic Party at last weekend’s convention, either. Newsom came in first, with 39 percent, followed by Chiang, with 30 percent. Eastin was third, with 20 percent, and Villaraigosa trailed with 9 percent.

Chiang and Eastin did considerably better at the convention than their polling suggested. Both are performing roughly on par with the two most prominent Republicans in the race, Assemblyman Travis Allen and venture capitalist John Cox. All are polling in the single digits, according to the Public Policy Institute of California’s latest survey.

Though Villaraigosa is running to the right of Newsom by advocating reform of the California Environmental Quality Act (CEQA), a bugaboo of developers, he still appeals to some on the left.

"He has political courage," said R.L. Miller, founder of Climate Hawks Vote and chair of the state Democratic Party’s environmental caucus. "He’s picked public fights with people. He seemed much more concerned about environmental justice than any of the others."

Villaraigosa also worked for a controversial water storage developer, Cadiz Inc., which is proposing to pump groundwater from under the Mojave Desert to sell to Southern California. The plans are under legal challenge from environmental groups disputing federal approval of a pipeline right of way (Greenwire, Nov. 29, 2017).

"We can’t let the perfect get in the way of the good. I can’t tell you the number of times I’ve been with environmentalists who say, ‘We want you to store water, but, by the way, we’re against dams,’" he said at a forum earlier this month hosted by the California League of Conservation Voters; the United Food and Commercial Workers International Union; and the political arms of the California Environmental Justice Alliance and Communities for a Better Environment, CEJA Action and CBE Action.

"Climate change either is the biggest challenge facing humankind, or it isn’t," Villaraigosa said. "Not all of these decisions are going to be perfect."

Villaraigosa, Chiang and Eastin all agreed that the state’s cap-and-trade system should be reformed to require more direct emission reductions at facilities, a major tenet of California environmental justice groups.

"I do believe that we need to address the fact that with cap and trade, people are able to pollute communities who are poor, disproportionately, and of course communities of color," Villaraigosa said. "And I think there needs to be a limit on that."

"The problem with cap and trade is it lets you pollute California and buy off some other state’s cleaner air," Eastin said.

At the same forum, Eastin found an easy segue between opposing the Cadiz project and defending the Deferred Action for Childhood Arrivals program.

"When it comes to the environment, nobody has a better record than I do," she declared. "There’s a lot we can do to protect our beautiful environment, but it means that as a state you’ve got to have a governor with a brass backbone who’s going to look Donald Trump in the eye and say, ‘Keep your mitts off of California.’"

Villaraigosa touted his record in the state Legislature, where he sponsored a 1999 bill that set up a grant program for replacing heavy-duty diesel engines and equipment. "We can’t just be for people who drive a Tesla and not a Toyota," he said. "Climate change is the biggest threat to humankind, but pollution is killing poor communities."

Newsom didn’t participate in the environmental debate but has put out a detailed platform calling climate change an "existential threat" and vowing support for 100 percent renewable electricity "on day one."

He also has a recent voting record thanks to his position as lieutenant governor, which gives him an environmental pulpit as a member of the State Lands Commission and Ocean Protection Council.

Newsom has the obvious edge, but a robust debate awaits, according to one political observer.

"I don’t think there’s any doubt the environmental groups will line up behind Newsom," said Steve Maviglio, a Democratic strategist in Sacramento.

"If Villaraigosa is going to play his cards for post-June, then that gives him room on the right to talk about things like the impact of CEQA on housing, water, transportation and many other things like that," he said.