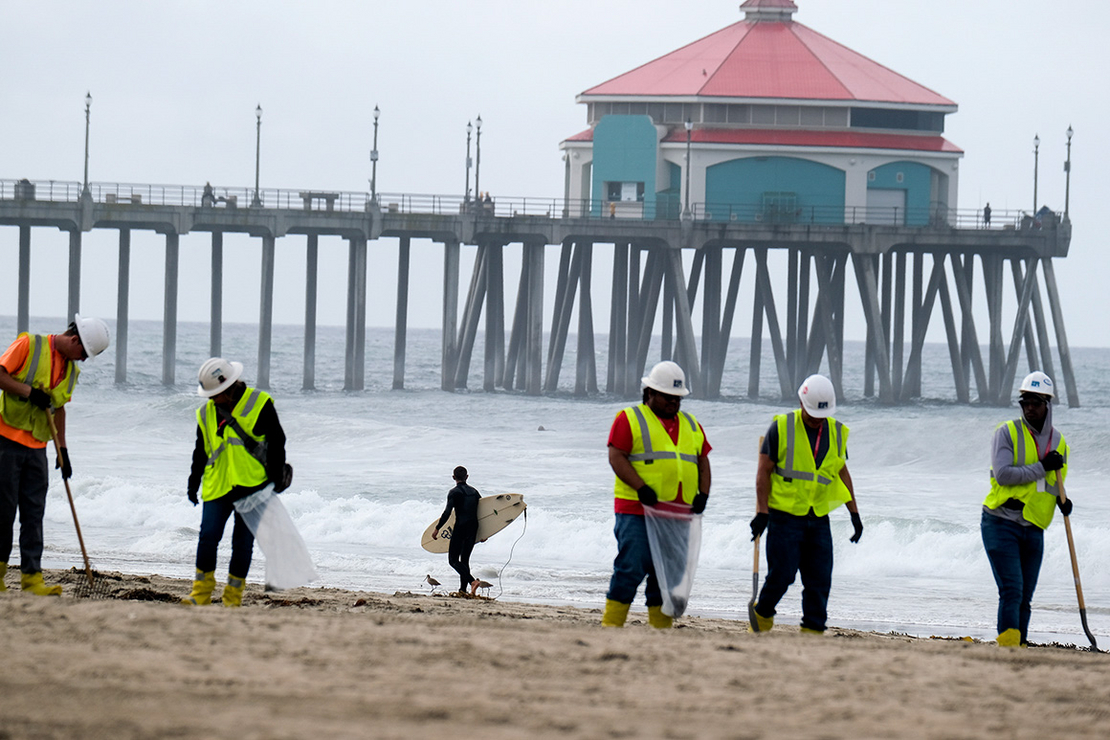 California has launched an investigation into the oil spill that earlier this month released as much as 3,100 barrels of crude off Huntington Beach.

One of several investigations underway, the inquiry into the ruptured pipeline underscores a pivot from emergency response to a search for answers.

“Our investigation will determine the facts and who is ultimately responsible,” said California Attorney General Rob Bonta, a Democrat. “If our laws were violated, we will hold those responsible accountable.”

Originating in a 13-inch split in Amplify Energy Corp.’s San Pedro Bay pipeline, the offshore oil spill is the worst California has experienced in decades. While details are still emerging, officials believe a large ship anchor dragged and bent the pipeline prior to the gash developing that released between 700 and 3,100 barrels of oil. That anchor strike is believed to have occurred months ago, officials have said (Energywire, Oct. 12).

Bonta said the state investigation would determine whether civil or criminal penalties are appropriate.

He highlighted that California, once the nation’s premier oil producer, is moving away from that history, with five times as many workers in clean energy as there are in fossil fuels.

“At its very essence, oil is the past, not our future,” he said.

These probes will take place against the backdrop of the Coast Guard’s investigation with the support of the National Transportation Safety Board and the Bureau of Safety and Environmental Enforcement. Another separate investigation is underway by the Pipeline and Hazardous Materials Administration — the lead regulator for this pipeline.

PHMSA has ordered the company to keep the pipeline shut down pending the outcome of its probe after it determined that a low-pressure alert may have warned of the pipeline’s possible failure hours before Amplify shut down operations (Energywire, Oct. 6).

Amplify’s CEO, Martyn Willsher, has said staff were not aware of any warning before witnessing a sheen on the water that they reported to the Coast Guard.

The tangle of investigations reflects the overlapping jurisdictions for offshore oil and gas pipelines —some regulated by BSEE, some by PHMSA — that watchdogs say can imperil rapid response to emergencies.

“Amplify Energy oil spill demonstrated how wading through the confusing and complicated world of MOU’s and boundaries of authority can delay that response,” Bill Caram, executive director of the Pipeline Safety Trust, said in an email. “There should be no question which facilities are regulated by PHMSA, and which are regulated by BSEE to ensure the appropriate regulator can take swift action on the accident response.”

The spill has sparked several lawsuits, and environmental groups have threatened to sue the Biden administration if it doesn’t halt new offshore oil and gas permitting.

That pressure reflects the political and social opposition in California to continued oil and gas production in federal waters off the Democratic-led state’s coast — where the pipeline split occurred.

“It is so unacceptable that so many Californians are once again facing the devastating effects of an offshore oil spill,” said California Sen. Alex Padilla (D) in a press conference yesterday with Bonta.

Padilla and Sen. Dianne Feinstein (D-Calif.) are pushing for a ban on new federal oil and gas leasing in the Pacific Ocean to be included in the budget reconciliation under consideration on Capitol Hill.

“The trade-off between oil production and environmental harm is simply not one that we would be making any longer,” he said, calling it a failure of Congress to prevent spills like this from occurring, a reference to that body’s jurisdiction over federal oil and gas drilling laws.

The Biden administration has expressed opposition to maintaining the status quo of federal oil and gas leasing, particularly considering the White House’s climate target of net-zero greenhouse gas emissions for the United States by midcentury. But officials have been largely silent on the spill.

Earlier this year, the White House had ordered a moratorium on new oil and gas leasing in federal waters, a pause for officials to weigh the climate impacts of the oil program. But a federal judge this summer ordered the administration to resume leasing, which will begin later this fall in the Gulf of Mexico.

Leasing in federal waters off the California coast hasn’t occurred since 1984, around the time that the oil platforms now operated by Amplify first came online. California banned new oil drilling leases in state waters up to 2 miles from shore in 1969 after the Santa Barbara oil spill.

In both federal and state waters, new drilling and production continue.

More than 1,600 people are involved in cleanup efforts for the California spill. They have collected some 250,000 pounds of oiled debris from the shore, and wildlife experts have recovered 45 dead birds.

The immediate cleanup effort is waning as the recoverable oil is captured.

Bonta noted that workers are encountering less oiled matter on the beaches, many of which reopened yesterday.

"Sometimes they don’t have enough work to do because they’ve picked up all the tar balls," he said. "We are seeing progress at every stage."