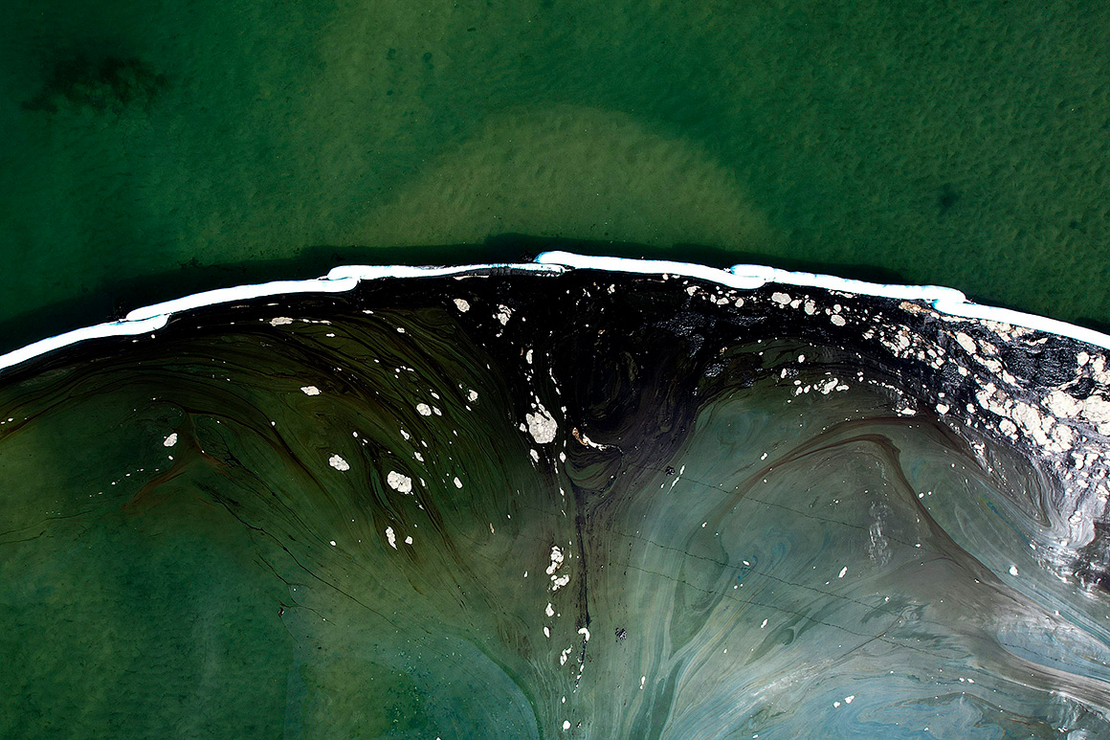 An aerial photo shows floating barriers known as booms set up to try to stop further incursion into Talbert Marsh after an oil spill off the coast of Huntington Beach, Calif. Ringo Chiu/Associated Press

An oil spill that released more than 144,000 gallons of crude along the south California coastline prompted key lawmakers to renew calls to block the state’s shores from any federal oil and gas production.

The momentum comes as Democrats look to protect provisions in their budget reconciliation package to enact a federal oil and gas leasing moratorium off the West Coast and eastern Gulf of Mexico.

“Where you drill you spill, and once again the inevitable has happened,” Rep. Jared Huffman (D-Calif.), a senior member of the House Natural Resources Committee, said in a tweet. “We cannot keep allowing Big Oil to cause these ecological disasters. It’s time my legislation to ban offshore drilling becomes law.”

Huffman, along with Sen. Dianne Feinstein (D-Calif.), introduced legislation — H.R. 653 and S. 58 — earlier this year that would permanently establish a moratorium on oil and gas activities in federal waters off the California, Oregon and Washington state coastlines.

That language was included in the House Natural Resources Committee’s contribution to the reconciliation package last month, although those provisions remain up in the air as the White House negotiates with moderates about the size and scope of the legislation.

The effort to protect California’s coastline picked up steam under the Trump administration when Interior Department officials identified the region for potential lease sales. A federal court eventually scuttled that effort, and the Biden administration has vowed to preserve current limits.

California blocked any new oil and gas drilling in state waters in the aftermath of the 1969 Santa Barbara oil spill, which released a then record 3 million gallons of crude oil into the ocean. No new federal leases have been issued in the state since 1984, but a future administration could change that.

“This spill highlights why we must also take action to prevent future spills, including passing the West Coast Ocean Protection Act,” Feinstein, chair of the Senate’s Energy-Water spending subcommittee, said in a statement. “Californians have made it clear: We don’t want oil drilling off our coast. It’s time to stop dangerous offshore drilling and invest in safer, cleaner energy solutions.”

The spill from this weekend occurred in the waters off Orange County and near Huntington Beach, beginning late Friday and lasting into Sunday. Officials yesterday said they were investigating whether a ship’s anchor struck a pipeline approximately 80 to 100 feet below the surface.

The pipeline, owned and operated by Houston-based Amplify Energy Corp., connects to a pair of offshore oil rigs that have been operating on federal waters since 1980.

“Big Oil’s offshore drilling puts the health of our communities, our local economies, and our planet at risk,” Rep. Katie Porter (D-Calif.) said in a tweet yesterday. “Cleaning up this spill is not enough; we need to stop these disasters from happening in the first place.”

The House Republican who represents the Orange Country district where the spill occurred has not yet echoed those calls for a moratorium. Rep. Michelle Steel (R-Calif.) has instead focused on trying to secure a disaster declaration from President Biden.

“It is imperative that the Federal Government assist in recovery efforts,” Steel said in a Oct. 3 letter to the White House. “Constituents who live along the shoreline are already reporting oil on the beach and strong odors.”

The White House has not yet issued a disaster declaration, but according to press secretary Jen Psaki, officials are monitoring closely the situation and providing federal resources to help in its aftermath.

Psaki yesterday said the federal government has contributed 14 boats for recovery operations and four aircraft for overflight assessments, and 105 government agency personnel are conducting shoreside response. Approximately 3,150 gallons of oil have been recovered from the water and 5,360 feet of boom has been deployed, she added.

“Response efforts are scheduled to continue until federal and state officials determine that the response to that crude oil spill is complete,” Psaki said.

White House promises of assistance did not stop the Democratic Congressional Campaign Committee from using the oil spill to attack Steel’s support and backing from fossil fuel companies.

Steel flipped the House seat formerly held by Rep. Harley Rouda (D-Calif.) in a tight election in 2020. The seat is likely to be among the front line fights in 2022 as well. Rouda said yesterday drilling activities should stop on all federal lands.

“As a nation, we must stop permitting oil drilling on federal lands and waters,” he said on Twitter. “No other community should suffer what OC is suffering now.”